Travelling alone can be lonely. But we are social creatures, and like swirling cosmic dust, clump together. For a period: Eventually the outward force of differing goals, or personalities, breaks the group apart. And solo travellers drift freely once again.

When I met Liz, it was in the darkness of night. I sat outside my poorly ventilated and still inhospitable hotel room. The hotel manager appeared first, shuffling somewhat, burdened by a heavy box. Liz quickly followed, as the manager crashed the box down in front of the door beside mine. She pulled from this great box a single key, attempted it in the door, and put it aside. The manager pulled out another key, with the same result. And another.

This was going to take some time.

Liz’ backpack was locked inside,  and she hadn’t changed, showered, or slept for 36 hours.  As Liz watched hope dwindle one flattened piece of steel at a time, she told me her circumstances:  She’d been invited the previous day to stay over in one of the funeral ceremony villages. Lying on her bamboo “mattress” that night, she could hear the Torajan funeral goers still partying, smelling wafts from the freshly-sacrificed animals.

She wasn’t exactly lulled to sleep.

I was impressed to hear she’d already been travelling in Indonesia, alone, for seven months. And also a little confused. The thought had crossed my mind that she was a complete buffoon. But quite a redeemable one, by her hilarious story telling: She had just returned from retracing her steps across town asking everyone (in Indonesian) if they’d seen her lost key. No, they all said, You lost your key? how did that happen? really? how strange!

She was confused by their odd looks, but continued her search. After nearly an hour asking a dozen people across the town, receiving many puzzled looks, she realised she’d mixed up her words. 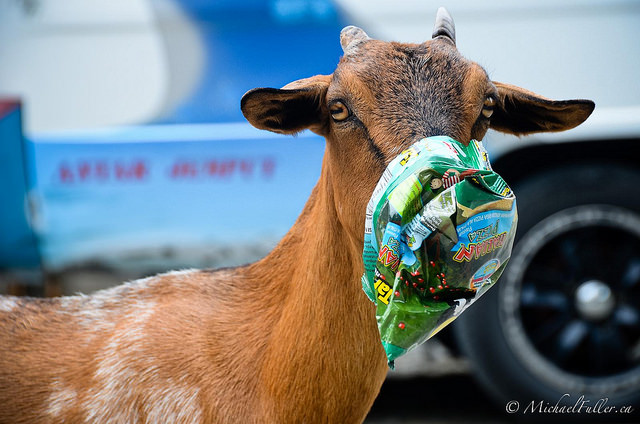 Goats can, and will, eat everything.

This is really a story written by other people, whom I encountered along my way. Not “by” me, but “through” me. A lightning-flash glimpse of their stories, as our own personal travel-timelines briefly connected.

Malou is a tall, gorgeous, and shy Dutch woman. She decided to use travel to face her neuroses: Chronically reliant on relationships, deathly afraid of many insects, and terrified of swimming in open water. Among other fears.

When she announced she was going to travel alone through the tropics (where the only place free of spider-risk is the open water), some people laughed at her.

When she arrived in Sulawesi’s capital Makassar and set out for the same fort where I was a temporary celebrity, she barely made it. Rickshaws followed her, cars honked, people approached her to take photos and speak to her. Back in The Netherlands she was just a quiet, modest, “average looking” (her words) girl. But in Sulawesi, the attention she received in the street was overwhelming: She actually retreated back to her hotel in tears.

When I had met her a week later, she’d grown tougher, learned different behaviours, changed her attitude. She still received attention, of course: My favourite time, from an old man who stopped us as we tried to cross a road. He silently but emphatically gave Malou a nod of approval and a thumbs up, then pulled out a whistle from his pocket, stopped 2 lanes of traffic, and dutifully walked us across.

It’s so interesting to be inside the bubble which beautiful people (sometimes unknowingly) inhabit. I do not exaggerate when I say that she nearly caused a few motorbike accidents in that town.

A few of us were sharing a room the day an enormous spider cozied up on Malou’s pillow: We were proud of how calmly she freaked out. (I would definitely have screamed).

I was also there when she snorkelled in the remote Togean Islands, on an offshore atoll: A shallow bump of coral atop a subsea mountain, surrounded by near-vertical drop-offs. It was clear water down to the seafloor 40m below — floating over the edge of these coral cliffs, we had vertigo. This atoll was about as “open water” as you could get, but Malou was right there with us. She told me later that in some of those moments she almost cried into her mask.

Next time she announces a big life decision, I wonder if they’ll still laugh at her. 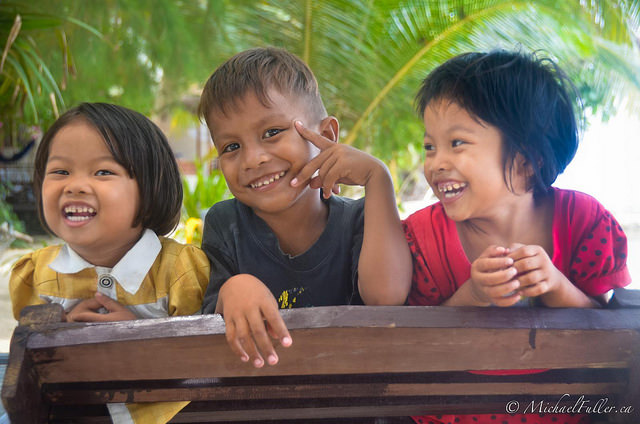 They may look cute, but they were a demanding bunch.  “More photos! Another!!!”   I had to flee.

Malou wasn’t the only one who got attention. While chatting with children to practise my terrible Indonesian, two sisters pointed at me and repeated the word “hewan” a few times. I didn’t know it, and someone overheard us and translated, “Hewan means animal”. I exaggerated my expression of shock, fake-scolding the sisters. “You think I am an animal?! I’m not even very hairy…”. Rolling their eyes at my Dad-jokes, exasperated by my silliness, one of them stood on her chair, reached up with finger and extended it towards my face. She touched my necklace, a carving of a gecko. “Hewan!” 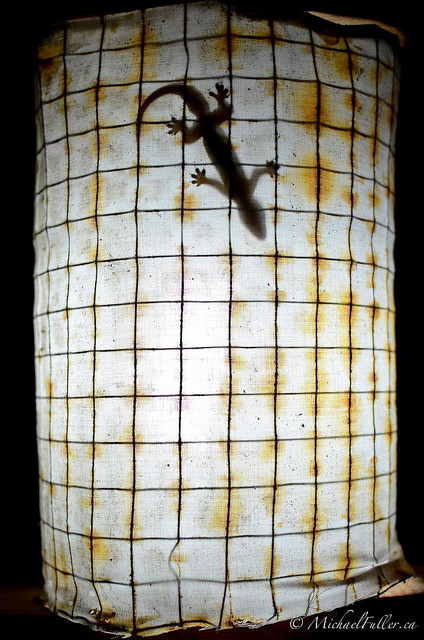 “IT’S LESS THAN 24hrs of flying to Canada from Sulawesi. But from where I live on the island, it takes two days just to reach an airport!”, Peter tells me, a big, friendly Quebecois and retired train driver. He lives in an uninspiring central Sulawesi port-town which we completely explored in a single afternoon. As expected he’s the only white person there, and universally known as “Uncle Peter”. He was eminently quotable, but I’ll just share a few from him.

He mentioned his Indonesian wife, whom he met here during his retirement travels. I wasn’t even considering asking but he must get a lot of “Why do you make your wife work if you’re a rich white man?” questions. So he started a comical defense:

“Women here are treated only slightly better than dogs. And that’s because dogs can’t do dishes! It’s awful. I’m not a slave driver. I told her she doesn’t need to work, but she likes her job and wants to. So she does!”

He also told me how dumbfounded locals are at hearing that he gets a pension. (“You mean the company sends you money every month? What!? You don’t do any work!”).

I suppose it is a bit strange of a concept. It’s so refreshing when other cultures let you see “normal” anew. 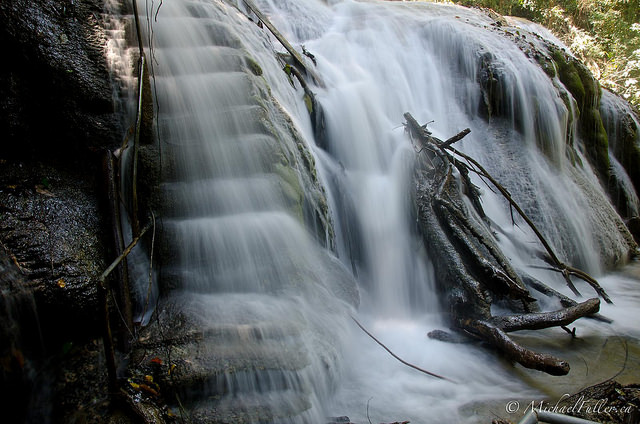 Why you don’t build stairs beside waterfalls

It was in the remote Togean Islands where life slowed down. Between snorkelling, fishing with the Bajau owner, and kayaking to tiny villages, I enjoyed long conversations with various locals and fellow travellers.

Aka, the patriarch Bajau owner of our beachside huts, has a smile so big you can see his molars. His wife, whom we all addressed as ‘Mama’, cooked our twice-daily fish and rice meals, every day, as a big family. Thankfully she knows at least a dozen ways to cook fish.  The island’s cats would watch our meals intently, hoping for a scrap of fish. We were told not to feed the cats because “it makes them lazy” but some of the girls did on the first day. And on the second day, their room had a midnight rat-snack-attack.

The cats got nothing for the rest of the week.

We were a jumble of transients living distant from our biological families, and too young or restless to have our own. So the family dinner was, quaint, nostalgic — but also necessary. That tiny island, population 40, had no shops or restaurants.

Thankfully the fish is freshly caught by Aka. And thankfully, Aka loves fishing. Every day. His blood is Bajau, a culture of traditionally nomadic sea-gypsies with a seafaring history as deep as the ocean. Though exact numbers are unknown, there are likely a couple million Bajau splashed across the region — from the Philippines to Malaysia and Indonesia — in droplet-sized communities. Often just a dozen stilt-houses teetering over the shallow sea.

When Aka’s not smiling, he’s often looking out, eyes narrowed, studying the blue horizon. JS and I went fishing with him one evening, where he helped him effortlessly catch two dozen fish (and by ‘helped’, I mean I took photos). At night we sat around the campfire, and after a few cups of arak (palm spirits), the normally shy owner told us a bit about his life.

He grew up in the Togeans, free-diving for fish daily wearing hand-made wooden goggles. Although Aka hosts travellers from around the world, he’s never left Indonesia, or even visited the populous Java, or popular Bali. What about the capital of Sulawesi? (where I had come from only a week earlier) Never. Or the nearest proper city, in the north? Nope. But as a young man he moved away from the Togeans, and spent 3 years as a builder in a small city about 200km west. He hated it.

“I couldn’t go fishing,” Aka complained. I quesiontioned this, since the city is coastal (like everything in this crazy K-shaped island of peninsulas). “Well…,” he explained, “I could go fishing, but I’d need to drive down to the dock, and then take the boat far away to find any fish. It was terrible.” he concluded, without a hint of sarcasm. “Now I jump in that boat [he points three metres away from us], and in 10 minutes I am fishing!”

I realized what all this meant — that worldly man, wealthy in so many ways, with friends from around the world, has probably not experienced something we take for granted.

“Never,” he smiled, his molars showing again. “I’ve never been in an airplane. I know that amazes lots of my guests.” 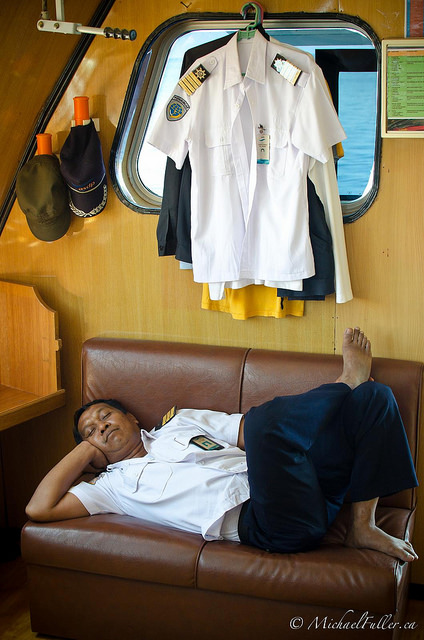 “Naptain”. On the bridge of the ferry across the Gulf of Tomini. 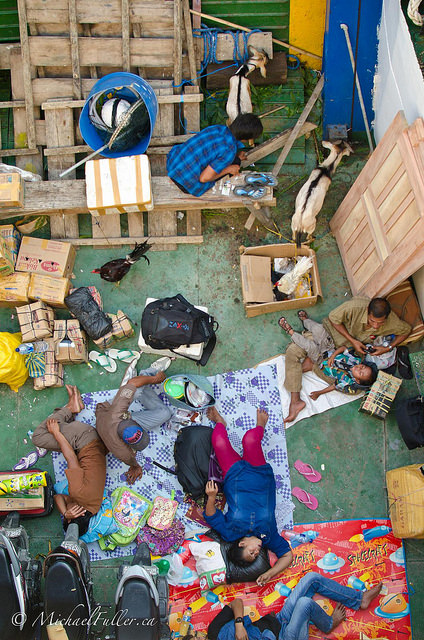 I may have already mentioned this island was tiny: we kayaked around it one morning. And remote: ferries only service it twice a week. So imagine my surprise when, after a few days, I saw someone walking down the beach towards us. Someone from 7 days and 700 kilometres earlier. It was Liz.

Sometimes individual travel-lines run parallel in time and space; perhaps they cross briefly. But sometimes, travel-lines continually cross in serendipitous ways, like the universe is nudging them into coincidence.

Liz’s and my travel-lines wouldn’t diverge much over the remaining week of my trip — a week in which we’d meet dead aunts, camp beside toxic waste, give straight-faced lies to the police, and eat a meal with two animals we’ve definitely never tried before.  But this Experience is long enough already.  Until next time… 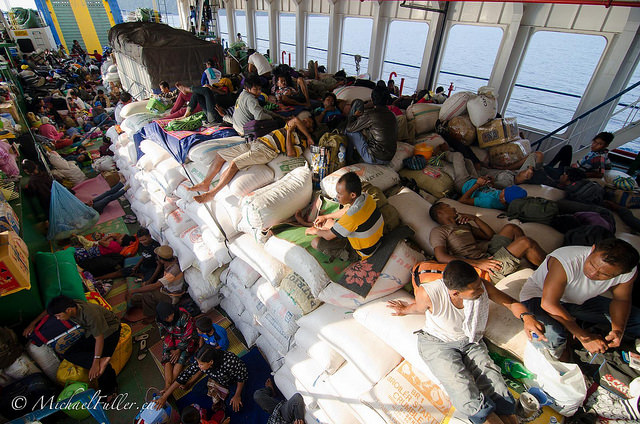 It was difficult to find a seat, let alone a place to sleep.