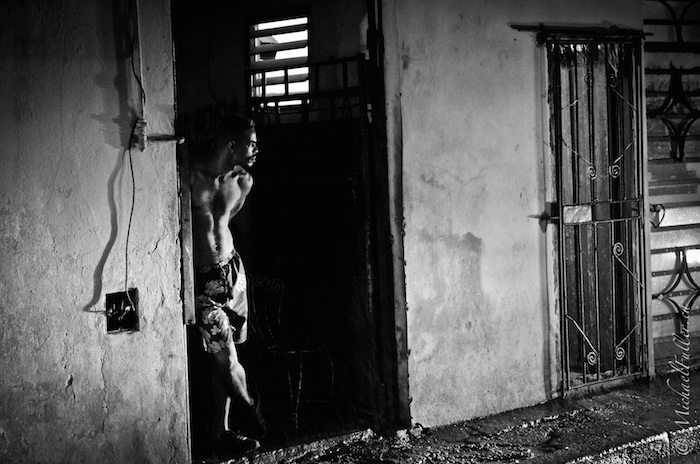 At the end of 2014, Obama and Castro announced that US-Cuba relations would begin to ‘normalise’. It’s no coincidence that 2015 was Cuba’s biggest year in tourism history. Until 2016 that is, when it over-topped its own record.

At the end of 2015, I was in Canada suffering from screen-overload after nearly 6 straight weeks of daily work publishing my first photography book. I needed a break. Though I normally prefer obscure places – as I have no patience for tourists (see my map) – given my extraordinary proximity I thought I’d see for myself about Cuba: the largest island in the Caribbean.

When you don’t plan, things don’t go as planned

Given I was in Cuba to relax I thought I’d spend one day near the sea before beginning my journeys across the island. On arrival day, already exhausted from a 4am start and an hour delay to hitch-hike to town from the airport, I then walked around Veradero for 4 hours carrying my backpack looking for a guesthouse. Over 20 guesthouses later, I was still homeless and not feeling very relaxed. The town was full (well the US$50 hotel had rooms – but I’d sooner sleep in the street. I’d never have any adventures if I travelled the world makin’ it rain with fiddy dolla’ bills).

Two tropical downpours later, soaked and tired, I gave up. I went to catch a bus out of town, only to find it too was full. All of them. For the next three days.

That was it, Veradero. You’d left me no choice.

I walked to the beach, waded shin deep in an ocean I hadn’t visited in 4 years for my 30 seconds of relaxation. Then I went to the edge of town and stuck out my thumb. Three hours and two truck rides later, I was in Havana.

An old injury had flared up in my foot after this long day walking in sandals with a heavy pack. But I managed to limp across town to my hostel (the cycle rickshaw driver amazed me by refusing an average week’s salary in exchange for pedalling me one kilometre). I nearly collapsed on the floor, but stopped myself. Because guess what? Yes. The hostel was full.

After 15 hours of straight travelling: by plane, taxi, bus, truck, and foot – I put my bag down in my room in another hostel and crashed into bed. 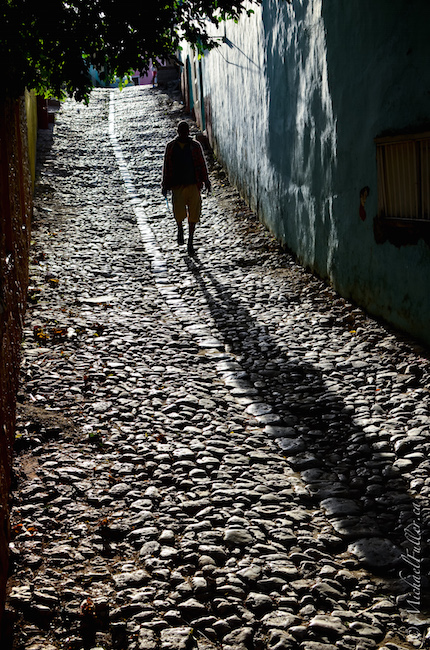 Eating and shopping: an endless string of surprises

Local restaurants’ are a similar hodgepodge. Menus literally vary by the hour due to the relative unpredictability of staple ingredients. Once again, the industrious Cubans have adapted brilliantly to their unfortunate reality: Menus are made on wooden sign boards, with sliding panels. They can be updated in seconds.

For our day trips out of Trinidad I found a fairly gruff local old man selling jam and cheese rolls for $0.25. Each morning I would buy a dozen, as this was like striking gold – the guy next door charged the same price for jam-only rolls (I checked his sign board). On my third consecutive morning I returned to Gruff-Man – by this point I’d become a regular, and had to be this guy’s best customer, evidenced by his decreasingly gruff demeanour – when he told me he had run out of cheese. And jam. “Try back next week.”

Later in the trip, I bought cake from a street vendor. The serviette upon which he served it to me was slightly unusual. I looked closer: it was a torn sheet of 3-ring looseleaf paper, neatly printed with what appeared to be his daughter’s homework.

What is simple delight to travellers like me is unfortunately a sobering reality for Cubans living under Communist rule. (which has, fortunately, improved since the 1990s when Soviet aid ended – known as the ‘special period’ – a time when starving people literally boiled their leather boots into soup). And I don’t share these observations to poke fun, but to find a lesson for us living in richer nations. And to give us pause before getting annoyed the next time our grocery store is sold out of our favourite free-range organic dairy-free low-sugar gluten-free pasta; or we just aren’t satisfied with any of the 27 different ways we’ve tried to fold our napkins for dinner guests. 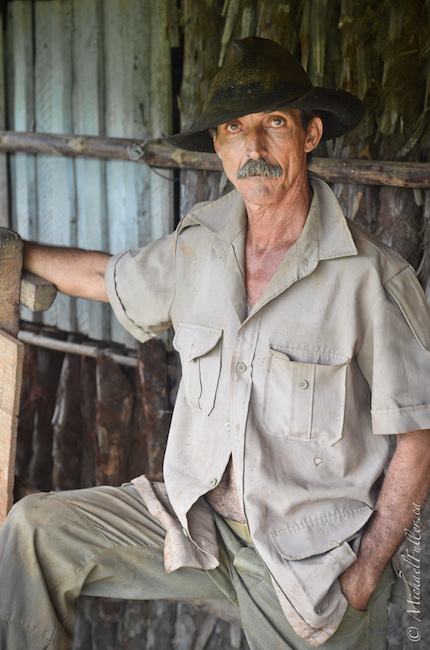 Meet Peppy the Tobacco farmer. More about him in the extra photos below. 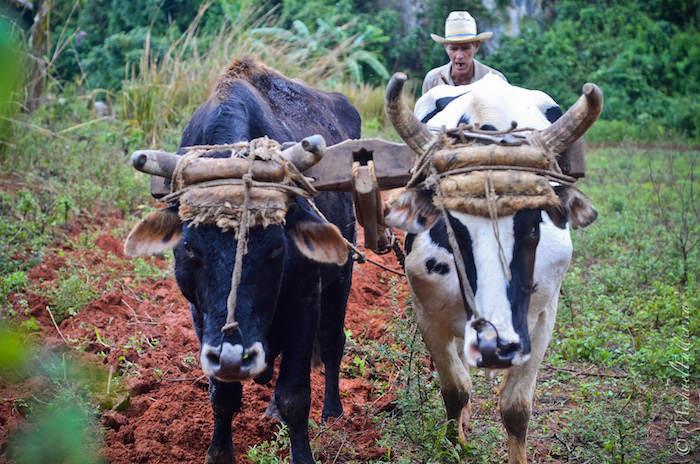 Frank and honest conversations between tourists and locals are not easy. Our hostel worker Rosemary sat quietly in the shadows during an emotional outpouring from a young German to fellow travellers. The German hated Havana and wanted to leave immediately – he’d seen young prostitutes, and been inside decaying apartments overcrowded with rural migrant workers. I implored Rosemary to offer her opinion of her city, which I hoped would help the German see things differently. Eventually she did – but hesitantly so, which I first believed was her shyness, but soon learned it was something else which held her back.

“It’s actually illegal for me to be having these kinds of conversations with gringos,” she told us. “Cubans may only discuss tourist-related matters with tourists. I could be detained or fined. And the secret police are everywhere…”

Two weeks later, when back in Havana with my brother, we were quite randomly invited into George’s apartment, a local construction worker we met in the streets on our final night in the country (he also spoke fluent French and hoped he might practise with some Canadiennes). George had a tiny two bedroom flat, smaller than most westerner’s studio apartments which he shared with his wife and son. His water pump, which filled the gravity tanks on his roof and provided water to the apartment, was broken. So each day they had to carry jugs of water from a neighbourhood tap up the two stories to their apartment. The cost to fix the pump? 50 dollars. His monthly salary? 20 dollars.

I asked about the good things in Cuba. “Yes, we have free education and health care”, he told me. “But no matter how educated I am, I still only get paid $20/month. And I need to buy food, clothes, shoes.” (Typical monthly food rations for a family are just 10kg of rice; 8kg of sugar; 6kg of chicken; 5 eggs; a cup of oil; 3 dozen buns; and a few hundred grams of salt. Children under seven get milk.)

He continued his candid, passionate diatribe. “Education is great! You can even become a doctor,” he said sardonically pulling up his collar and swaggering. “Look at me, I’m a doctor. So what? I still don’t earn any money!” (Doctors in Cuba earn only $50/month).

George’s brothers, in desperation over a decade earlier, had rowed a boat to Florida. Miraculously they reached the shores, and soon brought their mother over too. But George couldn’t go, for whatever reason.

This entire interaction was done at the risk of police harassment – they could detain George just for speaking to us in the street, let alone showing us his home. “It’s 2016,” he said. “Every day, every year, I work harder. And what changes in my life? Nothing. I get the same salary. I live in the same apartment. I have the same options: None! The revolution was 60 years ago, and since then, nothing here has changed.”

The conversation with George was raw. He invited us up because he genuinely wanted tourists to truly understand how Cubans lived. And sitting in his tiny crumbling apartment beside jugs of water carried upstairs daily, and hearing him speak about these issues he educated us in the most visceral way. 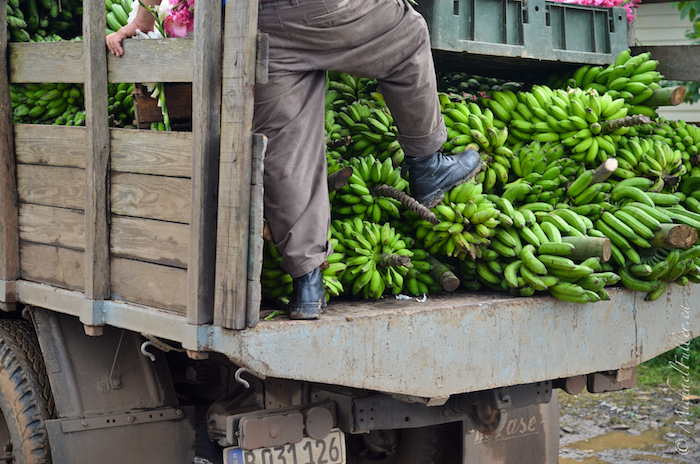 Even bananas live under the boot of communism

Hope, and another revolution?

I should end this story on a hopeful note: Only four months before my visit, Cubans got access to something so life changing, so ingrained in all our lives, that we can barely imagine a world without it.

How I learned of this:  I asked about wifi access, and was told to head 15 min down the street until I reached “Wifi Square”: There I could buy a card (in a drug-dealer like transaction – the official process takes hours) It would give me wifi access to a heavily censored internet (at the time of my trip Facebook was intermittent and Gmail was blocked) for $1.50/hour. I asked how I would know when I reach this so-called “Wifi Square”?

I reached a square bursting with people. Hundreds of them – often entire families gathered around a smartphone, joyously Skyping with distant relatives. See everyone in Cuba has some friend or relative who’s made the dangerous crossing to Florida to claim refugee status, never to return (Even George’s brother had desperately made the trip over a decade earlier). There were no flights between the two nations, and long distance calls could easily cost over one week’s salary. So I don’t exaggerate when I say these people around me had exuberant joy, experiencing the magic of Skype video to see loved ones – some they hadn’t seen in over a decade.

The country is bursting with tourists, and the increasingly uncensored and affordable internet is set to change everything. Cubans may finally get a revolution that, since 1959, they have been hoping for. 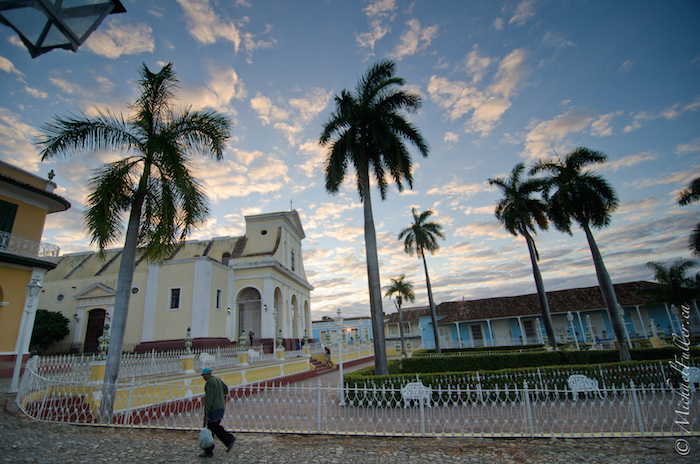 Hey you made it here! Well good, because I wanted to tell some more local people’s stories which didn’t fit in above. So here they are. And if you’ve forgotten this handy tip: Click photos to view them in a glorious full-screen gallery using arrows to change photos.

I met this friendly local man hand-lining on the Malecon (Havana's famous waterfront boulevard). He was a dance teacher, and after a few minutes' chatting, asked me for money.

Food vendor in the rain, selling lord knows what.

Peppicio aka the Viñales Tobacco Man showed us how tobacco is grown and prepared – their special blend includes: Water, vanilla, 'citron', pineapple, honey, and 'Cuban medicine' (that means rum). His mate then rolled us some cigars. They were delicious.

I spent near an hour documenting this potter and his coworkers: learning how they work and sharing some laughs. They thanked me for my time by gifting me a little sculpture!

This farmer had the biggest smile I've ever seen. He made us lunch and played us some tunes. Note the instrument isn't a guitar, but a 'Tres'.

As you know from my book The World at Work ( http://igg.me/at/waw ) I love learning about people working! This man and his neighbour are fixing the Lada's carburator.

I have no idea why this woman kept staring at me, holding a bread loaf, and shrugging. But I kept taking photos and saying "¡Hola!" to her. She remained a statue.

This wonderful woman Felicia wove trivets from reeds and sold them to tourists for $1. She sits outside her house along the trail leading up to an abandoned church. During our conversation she asked me three times if I had any old clothes to donate to her.

Sometimes being in Havana really does feel like you're inside film from the 1950s.

From the most exciting baseball game I ever attended: In the bottom of the ninth, the Havana team sealed an improbable come-from-behind victory by spanking a walk-off home run. Incredible.

Late one night in Havana, these whitely-dressed men unloaded bags of grain from a flatbed truck. And glared fierecely at me.

The shiniest of the classic cars line up in central Havana. Drivers hustle the many well-to-do tourists to join them for a ~$50/hour ride around the CBD. (I, on the other hand, rode vehicles of the same vintage – albeit in slightly worse condition – many times daily for the $1 shared-taxi fee)

In the streets of Havana, children line up to fire air files at cans of Bucanero beer. It's all part of the "Revolutionary Fighters Association – Children's Education Program"

A family heads home after a trip to Havana's outskirts, where they watched the storm-furious sea. (And performed some car repairs)