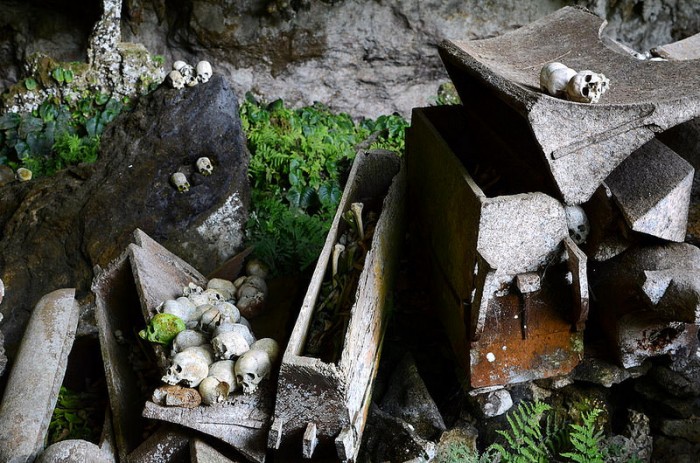 My few days in Tana Toraja really embodied the Indonesian flag: Red and white — which to some, symbolise dara and tulang.

It was a fascinating cultural and emotional experience. So this photographic adventure is devoted solely to those few days around Tana Toraja — “The Land of the Heavenly Kings”.

Note these stories are not intended to embellish or sensationalise the Torajan traditions. They showed respect to us foreigners, as we did for them: following their custom by bringing gifts to the villages we visited. I also spent much time interacting with people as fellow human beings, not just taking photos (which have all been taken with permission, and often encouragement, from those portrayed or their families).

Oh and one more thing. If you don’t like the sight of blood… be grateful you weren’t born a Torajan! And during the latter half of this article, just pretend you are someone who doesn’t mind blood. 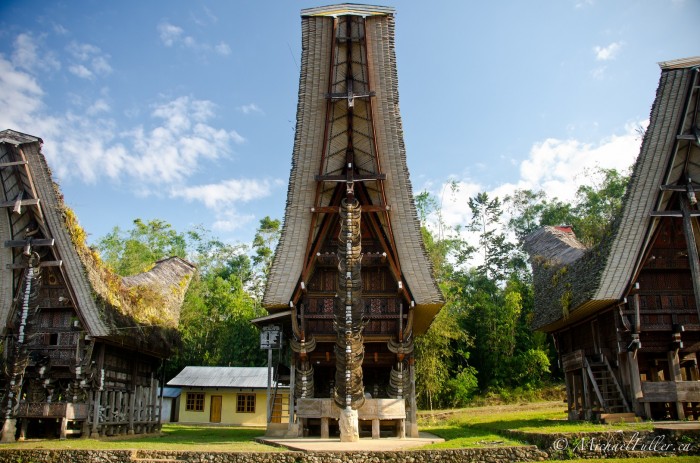 The angry water-buffalo signalled defeat against the other bull, by turning tail and bolting across the dry rice paddy that was their battleground. Standing a very safe 50m away, we watched the pair of charging bulls change course. Straight towards us. I had always considered those who participate in the famous ‘running of the bulls’ to be a very special kind of idiot. Now I found myself in the path of a 500kg bull. I felt pretty ‘special’ indeed.

The women and children around me began a fear-induced crescendo of alarm, and I realised that that our elevated terrace might not be such a deterrent for the bull, as it grew before us, seconds away. We all shuffled to one side — then ran, shoved, dived. A child stepped knee-deep in the gloopy rice paddy —  as the bull leapt onto the lower terrace beside us, and disappeared into the next rice field. 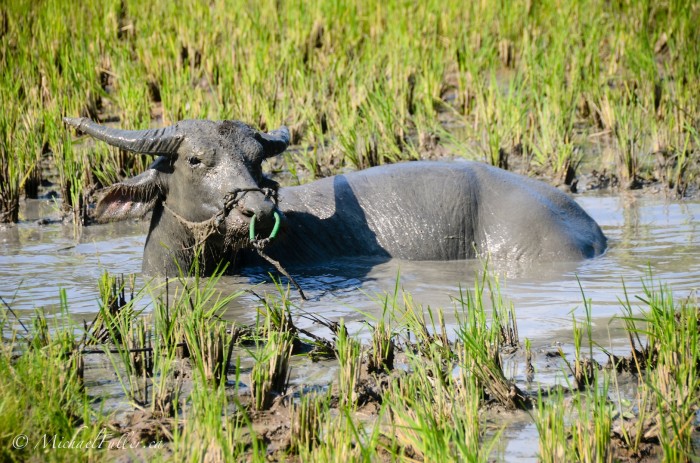 As happy as a buffalo in a rice paddy

It was Day One of the funeral ceremony in this Toraja village: The day the bulls, slated for sacrifice, are pitted against each other. Hundreds of villagers  come to watch (and definitely do not stand 50m away); gamble sometimes hundreds of dollars on the outcome (most fights ended immediately, with one bull just running away); and try to avoid getting hurt (it’s a bad omen for the ceremony). In the two hours we spent in that village, we only watched a few bull fights, but had to flee from half a dozen runaway bulls. Giant buffalo would suddenly materialise, like hoofed, furry ninjas, and sprint through the village; down our walking path; or into our rice paddy. They seemed to have a compass for us, the only three foreigners in the village.

I suppose it’s fair enough the bulls were trying to inflict maximum damage while they still had the chance. Perhaps they knew what was planned for them on day three? 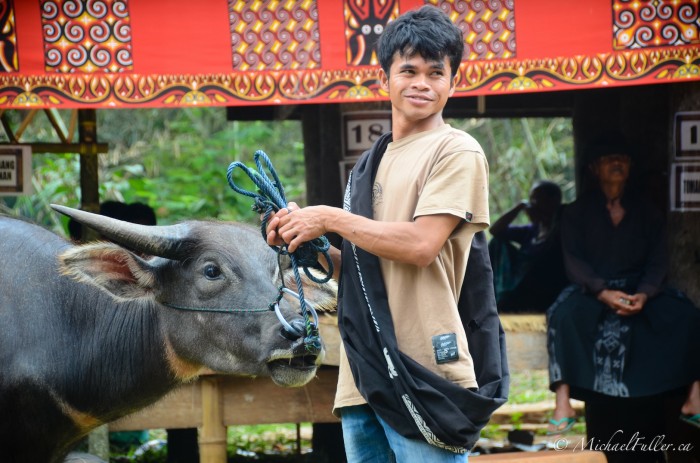 Just kidding —- they were clueless.

We arrived in the village early. Four men were dismantling a buffalo, peeling it’s skin like an orange, then hacking off its hooves for the children to play with (before taking them to home for soup). The men carved out massive meat slabs, and heaved them onto the makeshift butcher shop: Layers of banana leaves placed on the ground, eight men sitting around them in a circle, slicing flesh into reasonable serving sizes on wooden boards with rusty knives. 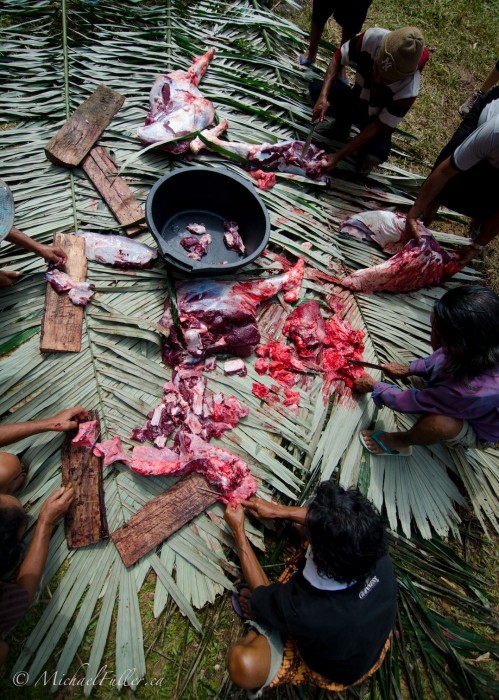 They were a proficient operation. 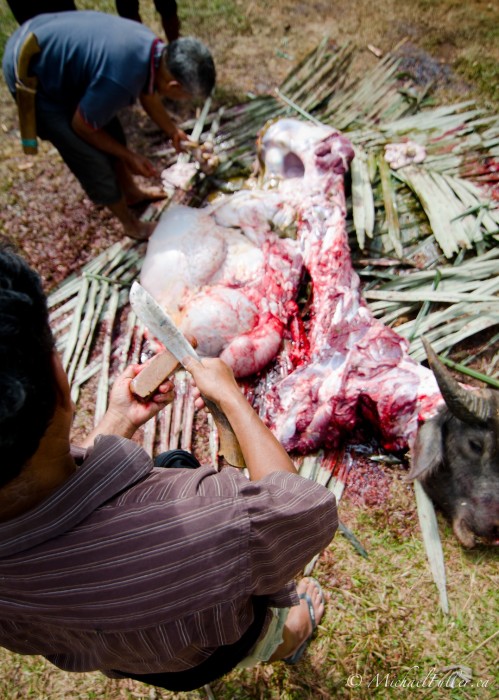 I felt fine until the end, when the intestines spilled open.

The sacrifice hadn’t begun yet; that’s day three. They just needed something to feed the hundreds of guests who were attending this funeral, and what better snack for a buffalo slaughter than…. barbecued buffalo. Our guide sat us down beside the MC on one of the many low bamboo seating platforms. The entire array of platforms and ceremonial tongkonan was temporary, built over a month with the help of many hands in the community. Just for this funeral. He pointed to the platform directly over our head. “The coffin,” he whispered. She had died two months ago, preserved with formaldehyde while the arrangements were made for the funeral.

After a few hours, it was clear the rest of the day would be occupied by the formalities of introducing every family in attendance, deliberating about fair allocation of gifts, speaking on the deceased, and partying. We left to see the great variety of places where Torajan put their dead, including the old caves (“when our ancestors got annoyed with bodies getting eaten by animals, they started hanging the coffins instead, from the cave ceilings”); tombs hand carved into solid cliff faces (I climbed 10m up a ladder made from a single shoot of bamboo to speak to one of the grave diggers in action: He told me it takes over 6 weeks of hammering and chiseling to make one grave); and even the ‘dead baby tree’ where the richest Toraja would, decades ago, carve open a hole in the trunk and place inside their dead infants (“because they’re too small to reach heaven on their own, so the milky sap of this tree will feed the baby while it slowly grows its spirit towards heaven”). 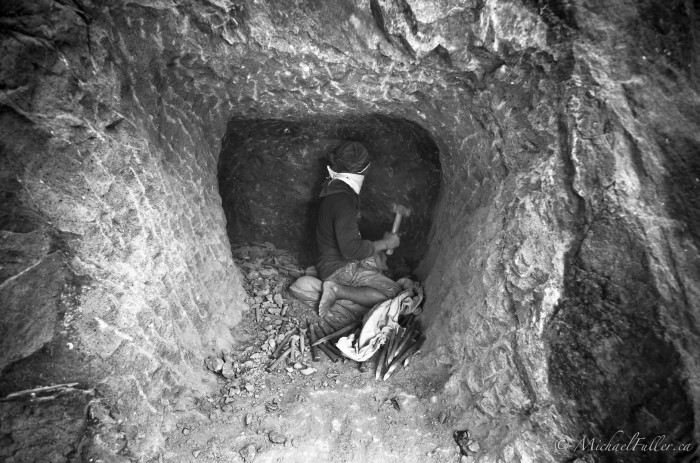 The day someone gets a jackleg drill, there’ll be a lot of unemployed grave diggers.

One tradition I missed that takes place each August was the Ma’Nene ritual. Families exhume their mummified relatives to be washed, re-dressed in new clothes, and posed for photos with family members.  That would certainly make for an interesting ‘selfie’. 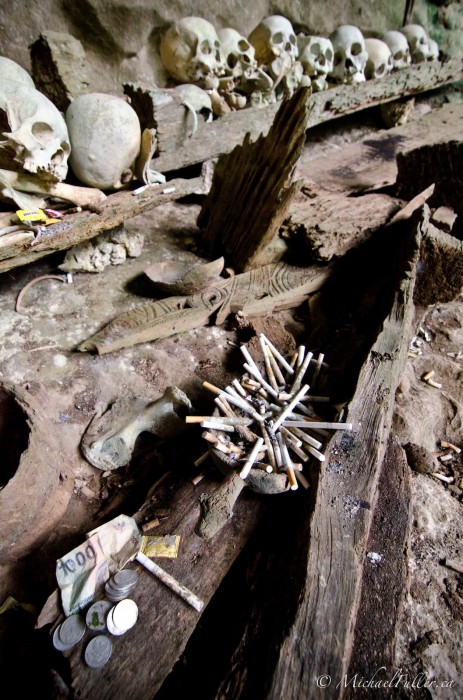 Our guide explained the origins of the animal sacrifice at Torajan funeral ceremonies (always pigs and buffalos; never chickens or other ‘symbols of life’). The ancient Toraja could communicate with their many gods directly, via a stairway to heaven. But there was—you guessed it—a fall from grace: The ‘upper world’ (heaven) and ‘world of man’ (earth) became divorced. Ever since, people could only communicate to heaven via either life rituals (banned by the Dutch a century ago, and no longer practised), or death rituals. (“So, animal sacrifices are like an SMS to heaven?” I observed, to nobody’s amusement).

My interpretation is that Torajans believe the spirit of the deceased is conveyed directly to heaven on the wave of gratitude all the animal sacrifices create. It was also a method of carrying one’s wealth into the afterlife: Before 1909, the wealthiest people would have their slaves sacrificed along with the buffalo (to continue serving them). Nowadays, people are just buried with their mobile phones.

I try to avoid casting western-biased judgements upon traditional beliefs and practises, unless they’re inflicting serious suffering on the earth or other living creatures.  In this Toraja tradition, no parts of any of the animals are wasted — the meat is given to friends, relatives, attending families, local churches, and preserved to be eaten the rest of the year. The butchers are trained professionals (though one cowboy killer tried to hold the buffalo by its nose instead of tying it up before slitting its throat; the beast nearly bowled over ten of us in the ensuing chaos). Only two of the twenty slaughtered buffalo I witnessed (and dodged) at the funeral took more than two minutes to die; and all of them lived extremely well in the years prior, compared to how we treat our livestock.  The Torajans are both more connected to, and (likely as a result) less wasteful with, the animals they kill. 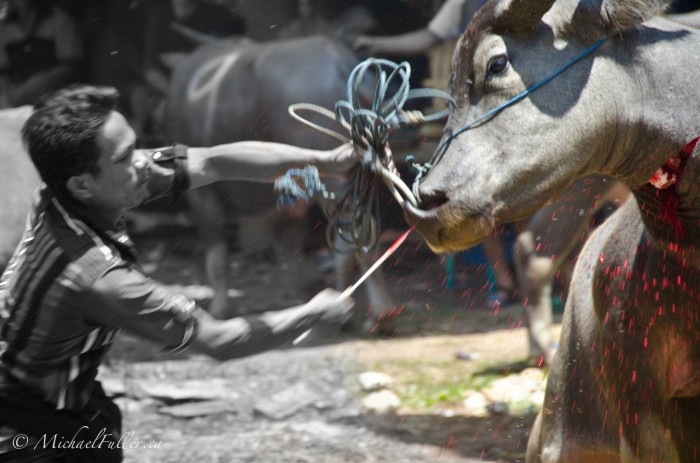 Ours was a modest ceremony: only 24 buffalo sacrificed. Black buffalo are standard funeral currency, and apparently worth about $3,500. White, albino, and mixed black/white buffalo are all worth more — up to and sometimes beyond the staggering sum of $50,000. Each.

I couldn’t get my head completely around buffalo economics — for instance, if all Torajans gave up the buffalo sacrificing and sold them elsewhere, could they actually realise these super-profits? It’s more likely that these ‘dollar values’ are rarely realised (except when sold to wealthy families for elaborate ceremonies, like the one my friend Liz attended where they sacrificed 100 buffalo) as most buffalo are raised in people’s own villages, and gifted to others’ funerals as repayment for previous bovine gifts. This view is supported by the fact that funerals have meticulous record-keeping and elaborate announcements regarding which families attended the funeral; what and how many animals they gifted; and which animals were re-gifted by the deceased’s family to others in the community, either as meat or alive. I’m sure there’s an Economics PhD just waiting to be written here.

The Torajan people welcome visitors to their funerals, and encourage photos, because it all adds prestige by enhancing memories of the life and death of the deceased. By reading this, you too are honouring the spirit of the deceased woman of Tallunglipu. Along with the other photographers there, I reckon she’s been bestowed at least 300 megapixels. I wonder how many buffalo that’s worth. 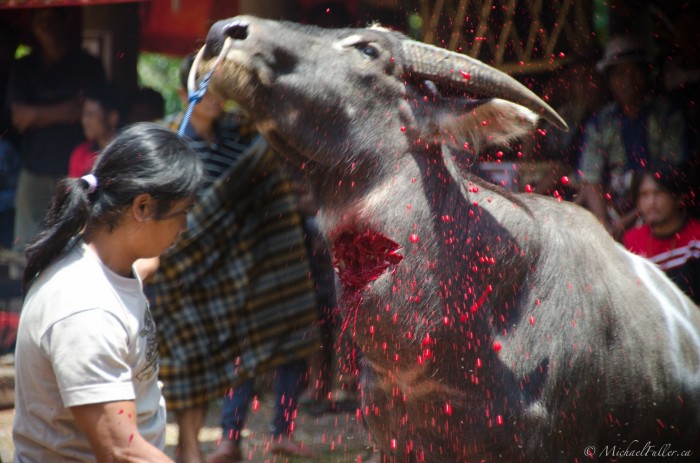 Buffalo contain a lot of blood.

The perspectives through which traditional cultures see the world around them absolutely fascinate me. Most likely because we live in an age defined by rapidly increasing ubiquity and mono-culture. What do I mean by this?

For simplicity sake, an example of the ubiquity: Available in the tiniest villages are sugar-laden processed foods, which unfortunately our own biology compels us to desire. Even in western countries, with some (albeit flawed) nutritional education, we have a diet-induced health epidemic. But many people in the world don’t even have the nutritional education which we are so privileged to ignore. They’re on a sweet, sugary slope to diabetes. And all this isn’t to say the Torajan don’t eat candy too — but they also eat barbecue bamboo buffalo. And that’s not ubiquitous.

As for mono-culture, I mean the treadmill of mindless materialism for which many in the west flog themselves, in this age of unimaginable wealth, comfort, and technological wizardry. The secular society our ancestors fought so hard for has eroded into a cult of consumption. And now, we are steamrolling it over the rest of the world, with television, advertising, and foreign policy.  But before anyone suspects me of celebrating the ‘noble savage’, or romanticising poverty, I’ll quote an inspiring spokesperson for all cultures, the ethnographer Wade Davis.

I’m not suggesting that anybody try to go back to a pre-industrial past any more than I’m suggesting that indigenous people be somehow kept from the benefits of modernity and science. It’s not about the traditional versus the modern so much as asking “What kind of world do we want to live in?” Do we want to have just one way of looking at the world?  Those voices are there to remind us that there are other options…

….when you consider that our species descended from our progenitor 250,000 years ago and that the Neolithic revolution occurred 12,000 years ago, and that our industrial society is scarcely 300 years old – you start to see that the well of history our “modern” culture draws from is very shallow. It suggests that maybe we don’t have all the answers to the challenges facing us in the new millennia.

Modernity does not require mono-culture.  Some people may look forward to a future where we all speak English, browse Facebook from smart-phones in the wildest jungles and remotest mountains, get McDonald’s in every town. Well, I’m not lovin’ it — nothing scares me more.

While in the remote Togean Islands, two days journey from the nearest airport, we kayaked to a Bajau community. These ‘sea gypsies’, spend their entire lives either in, on, or slightly above the ocean. The village was little more than a few dozen stilt-houses built over the shallow sea. I jokingly asked three teenagers, “Where’s the McDonald’s?”

They stared blankly at me. They glanced at each other. And then they asked. “What’s McDonald’s?”

I am accustomed to people not laughing at my jokes. But this was the first time I was delighted by it. 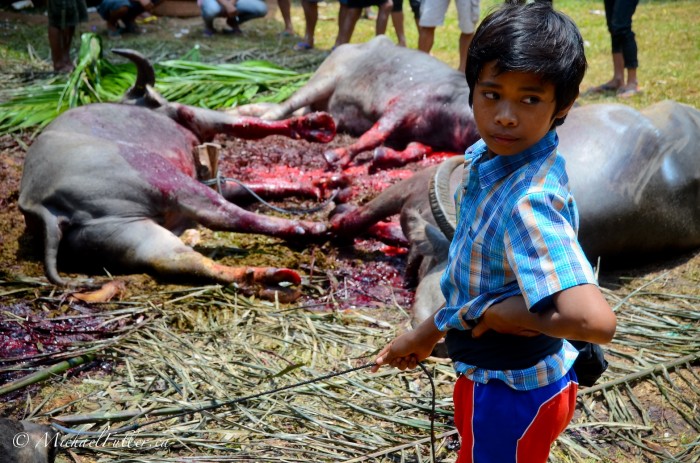 I could totally eat a McBuffalo burger right now