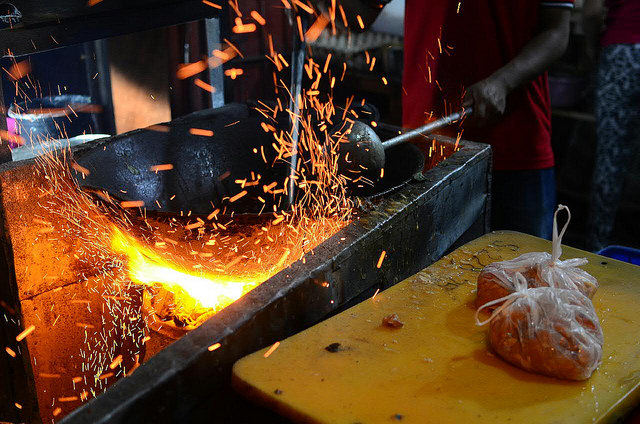 Ask someone what the word ‘Kuta’ conjures and you’re more likely to hear cringe-worthy stories of sleeve-tattooed bogans (Aussie rednecks) abusing the local Balinese, than you are to hear about the surf breaks, world famous since the late 1960s. I actually lost interest in visiting Kuta after hearing about a friend at the beach swimming face-first into a soiled diaper. So I was imagining the beach to be like recent photos from Java of pro surfers in magnificent barreling waves laden with trash (to raise awareness about the waste management epidemic in Indonesia1). Never say never: My adventures further afield in Sulawesi required a day layover in Bali, and I have an academic fascination with famously awful places (like Vang Vieng), so I decided to see how bad a combo of bogans, Bintang, and beaches could be.

As usual, I chatted with my taxi man. His name was Wayan, a very common name around these parts, because depending on religion/caste, Balinese people are named accordingly to their birth order. So I knowingly said, “Ah, you’re the oldest boy?”  pretty sure that I had the facts straight. “No”, he said.  I wondered if I mixed up the naming sequence. “I’m the 9th boy.”

He noticed my furrowed brow.

I’d always assumed that parents with four boys got free reign for naming the rest. How wrong I was. Wayan#3 wove us through the narrow streets of Kuta, threading laneways so narrow even motorbikes couldn’t fit past us. I was glad he knew our way, because in Kuta it’s not easy navigating the dizzying tangle of lanes; or the repeating businesses: Touristy shop, hotel, tattoo parlour, touristy shop, restaurant, sports bar (now showing: Aussie rules football!), touristy shop, massage parlour. Ad infinitum/nauseum. 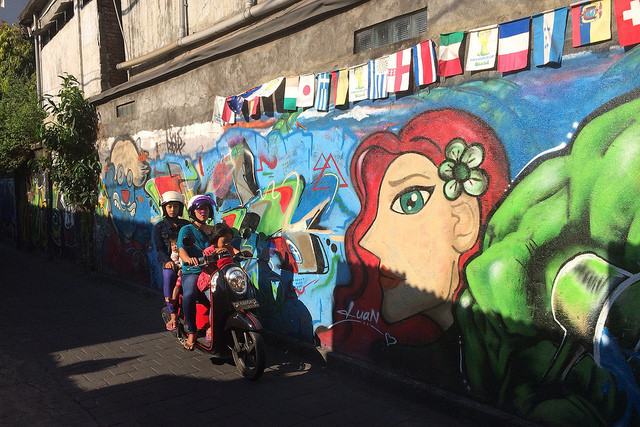 Having a grandfatherly appetite for partying, I got up early to catch some waves before check-out. I headed north of Kuta to avoid the largest crowds (and errant diapers). Despite the reputation for crowded waves in Bali, I had to give up only one — to the lifeguard of all people, surfing on his rescue board. I thought that people who consider Bali crowded mustn’t have been to Perth, where two-dozen people fight for barely-surfable waves. But it was still early, and after 11:00am, the hung-over partiers and surf school students crowded the now wind-wrecked waves. I happily handed them over.

Drying off, I met an 8-year old girl with an enviable life: In her perfect english — which she learned at an international school in Japan, her mother’s homeland — she explained that she now lives in Bali — her father’s homeland — and she surfs every day. She also takes care of her two adorable dogs, both named Stella (“because it’s a good name!”). 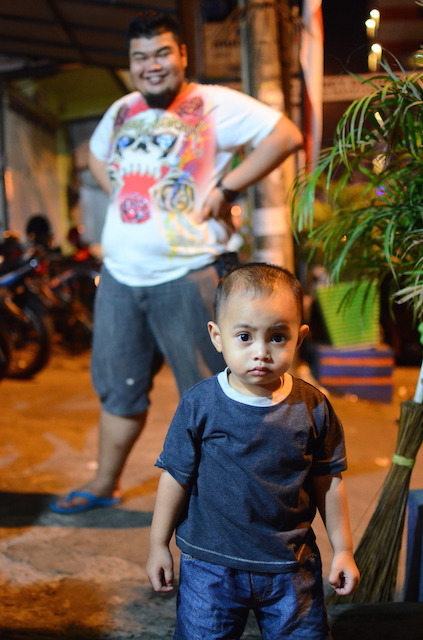 Though I only spent 24 hours in Kuta, I declare that it’s not completely awful.  Even though I’ve never felt so out of place — I don’t have any large, colourful tattoos — the lovely Balinese treat everyone well (my amazing hotel staff knew every single guests’ name). And I was able to sleep well, despite the distant thumping music, and much louder ubiquitous flock of squawking chickens and raucaus roosters. Thank gods (there are plenty here to choose from) for earplugs.

All that being said, the point of my trip was not to review a tourist trap in Bali. 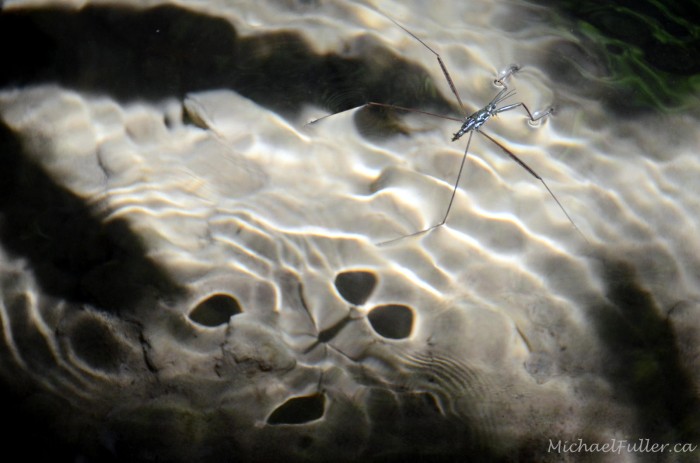 Can’t you feel the tension? (and notice the lensing effect in the shadow)

Of bogeymen and transgender sailing priests

As our domestic flight pushed back from the gate to depart Bali, the PA clicked on. “Attention passengers, ” the woman began, in that melodic, syrupy tone, “We’d like to remind you that the possession or trafficking of drugs is a serious crime. It carries the maximum penalty–”
she even paused an instant —

“… of death. Thank you.”  The mic clicked off. Thanks, I thought, but isn’t it a tad late now to bail on my drug run?

The point of my trip was not (this time) to run drugs. It was to explore Sulawesi — that bizarrely shaped island consisting almost entirely of peninsulae — which few people have heard of. Despite it being the world’s 11th largest island (one place above NZ’s South Island) and having a population nearing Australia’s.

But most people have heard of the bogeyman.

Though contested, the origin may be the Bugis people, the seafaring culture of South Sulawesi. Bugis are famous for the magnificent schooners they have built for centuries; sailing those ships to trade (mostly sea cucumbers) across thousands of kilometres — the Makassan kingdom even extended to Australia’s Northern Territory, and is still evidenced in the Yolngu language; and for their swashbuckling piracy. Yarr. Those Bugis attacks on Dutch and English trading ships could have given our ancestors the ‘Bugi men’ stories we’ve told children for many generations. Shiver me timbers, indeed.

Another random factoid about the Bugis is the inadvertent impact their traditions had on modern Indonesia culture. The Bugis define not two genders, but five: male, female, and three different ‘transgenders’, one of them called bissu. Each Bugis schooner always had on board a bissu priest, who was said to be able to channel the gods when in a trance; perhaps because god is also neither male nor female. The status of those priests has contributed to the acceptance of transgendered people (known as ‘waria’, a mashup of the words for woman ‘wanita’ and man ‘pria’) in today’s Indonesian culture. 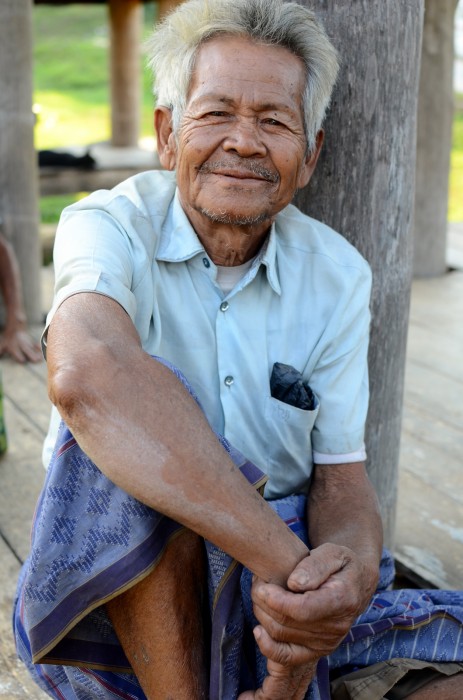 But the point of my trip was not to conquer the bogeyman (if only!). My fascination with Sulawesi began when I learned of the Toraja people’s unique cultural relationship with death, but you’ll hear all about them in Indonesia #4. My drug-running airplane landed in Makassar, a port city rich with history. Here, for nearly two centuries, the Dutch colonial spice-junkies had a major port for their Vereenigde Oostindische Compagnie (a.k.a. the Dutch East India Company, or VOC). This is a company whose powers eclipsed most nations’, and would raise eyebrows even amongst today’s exceedingly powerful corporations: The VOC could establish colonies; negotiate treaties; execute convicts, even wage wars. Typically a quarter of their ships were warships; a sixth of their employees soldiers. Their regional base for these ‘trade activities’ was Fort Rotterdam in Makassar, named in honour of the Netherlands’ major port city (and today, Europe’s largest port). Though this fort is more colloquially referred to as “Turtle Fort” due to its uncannily amphibious shape.

The guidebook warned about the density of students invading the fort every Sunday, but I thought my seasoned defences should hold. The next few hours, however, were quite the battle: I was barraged with photos requests, posing for over a hundred photos (not an exaggeration) and receiving dozens of giggly-shy greetings from swooning teenage girls (a slight exaggeration). I even got cornered by one student for a 5-minute english interview: As we began I looked up and — surprise! — I was being filmed. My favourite request for a photo, though, came from a girl in a competition with her friends. (“selfies with strangers”)

I’ve never denied photo requests before, but if I hadn’t drawn the line, I’d still be there now. Defeat never hurt my smiling-muscles so much. This experience makes me wonder: If the Dutch invaders had been confronted by armies of teenagers asking them to practise their Dutch and pose for selfies, how differently could history have turned out? 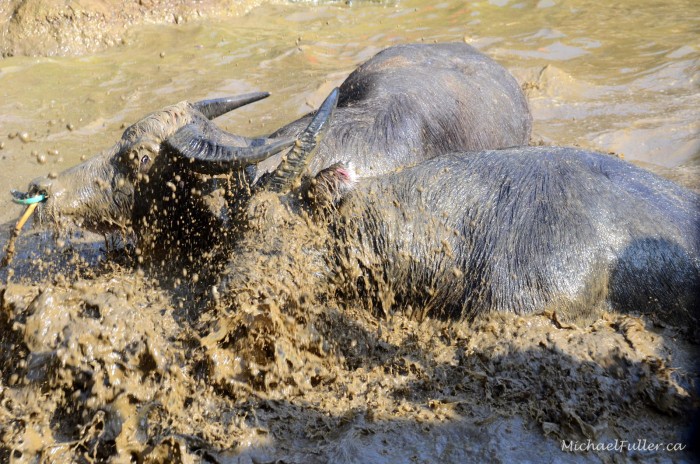 Nobody had ever before seen buffalo fighting in a rice-paddy dam. My money was on green-ring.

In any sizable capital city like Makassar (population 2 million) you’re bound to find some hidden gems; things that aren’t found in the Lonely Planet. There was, for example, a silly trend of hotel name one-up-manship: I walked past “The Fave Hotel”; “The Legend” hotel; the “Numero Uno Hotel”; and the “Grand Popular Hotel”. (these quirky trends are reminiscent of Perth’s punnily-named optometrists). I also stumbled across a carnival, quite clearly, and abundantly, sponsored by a major bank. Perhaps I arrived too early, because the attendees were mostly either in booths advertising banking services, or security guards (dressed like soldiers) melting around under fan-cooled tents in the humid midday heat. Ironically the most entertainment came not the band, wailing out incredible covers of 90s pop music, but — at least for the kids in the play area– from the filthy hobo clothed in just a single rag, rifling through the trash bins for food. He noticed the kids watching, and began clowning around, pretending to eat cardboard, making trash into hats, clothing, and even a dance partner. The kids loved it. I felt a strange mix of joy and sorrow.

Like most crossroads, however, Makassar also had a seedy underbelly. Another legacy of sailing is, of course, sailors, and specifically what their preferred activities while in port. My hotel was in the ‘lively’ part of Makassar, and during my street wanderings I noticed a peculiarly high density of karaoke bars: Perhaps Makassarans really love karaoke? But even on a Saturday night, none of them looked very busy. What was going on? Turns out they’re almost exclusively brothels. (Though I really hope some of them weren’t, especially the brightly lit “Family Karaoke”).  This street is aptly referred to by locals as “Vagina Street”.

But the point of my trip was not karaoke — actual, or euphemised. So the next day, I sped northward on a comically decadent coach-bus, towards the Tana Toraja (‘Land of the Heavenly Kings’), and Indonesia update #4.

A warning: the next update is going to be deadly. 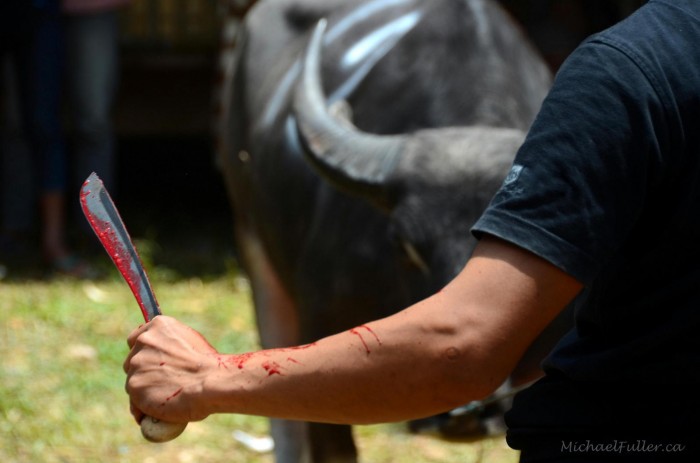 There will definitely be blood.

I’ve been learning heaps of Indonesian over here, and a few really great phrases that most foreigners never learn. For instance, whenever people on the street ask you what you’re doing, or where you’re going (which happens all the time), you can reply “makan angin”, which literally means “eating the breeze”. It’s guaranteed to get a smile.

As usual, plenty more photos and mini-stories are waiting for attention on my Flickr.

But there are shoots of hope, one of which is my friends’ NGO, Bottle for Botol. She’s already having wins across Indonesia, getting plastics out of schools, and environmental education in. If this is something you care about, check them out, and make a donation.