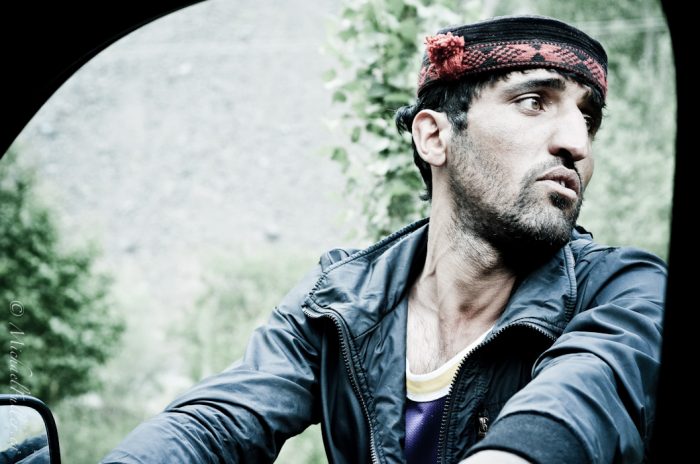 I spent two months in Central Asia, immersing myself in landscapes, history, culture and (mis)adventures.

Remember my drunken Kyrgyz hitchhiking escapade? (not me, the driver). Well this is the Tajik sequel.

A little background on why we were hitchhiking

Picture this: A remote valley, inaccessible but for a suspension bridge across a raging river. A narrow barren rocky valley lined by jagged peaks. Not a leaf of greenery in sight.

But if you hike 4 hours up this valley, shoots of green emerge. And evidence of human habitation: tiny canals lined with hand-laid stone walls, diverting water from the river to meander through quaint little fields of tomatoes, onions, and tobacco. Next you find a village of simple mud-walled huts, population 100, set like a tiny, peaceful, quaint dot of oasis amongst a forbidding mountain moonscape.

I showed this scenery, and some of the mountain villagers, in my Getting High in Tajikistan photo-essay.

The one person who spoke english in the village, Nazarsho, could offer a glimpse into life here. I asked him about winter and how they cope. His response wasn’t what I expected.

“We smoke a lot of cigarettes, and watch a lot of television”. 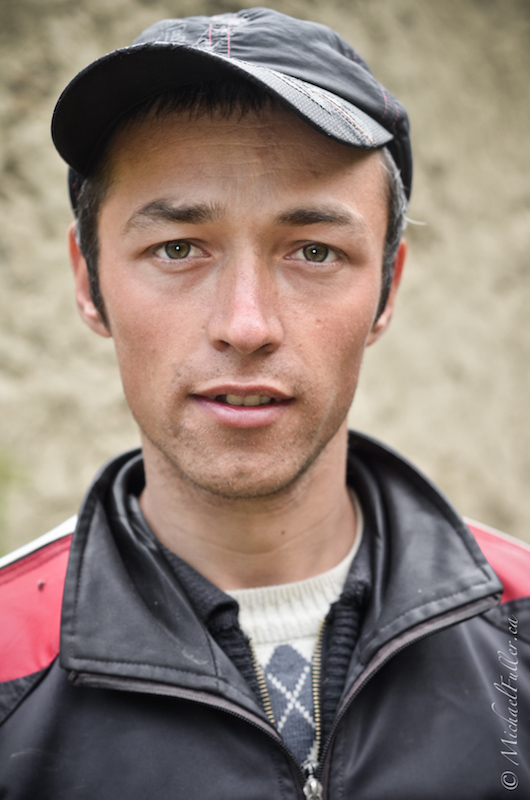 Nazarsho, our soft-spoken friend from a tiny off-grid mountain village

Up here, a four-hour walk to the nearest road, Nazarsho’s world was beyond fossil fuels. I wondered where they got their power.

“We built a hydro-electric turbine in the river,” he said, pointing to thick cables strung up on sticks towards the river. These villagers must really like television.

The next day we were returning from the hike, exhausted and frustrated by an unexpected flood inside our expectedly terrible $20 tent (which Mozen named ‘Oliver’), and low on patience from the never-ending alpine descent. When we reached a road, we celebrated the end of our hike. Prematurely.

We hiked for almost two more hours before a single car came past us, which we flagged down desperately, and paid for a lift to the nearest town to find a lift onwards.

And in that town… is where we met Dog and Crapper. 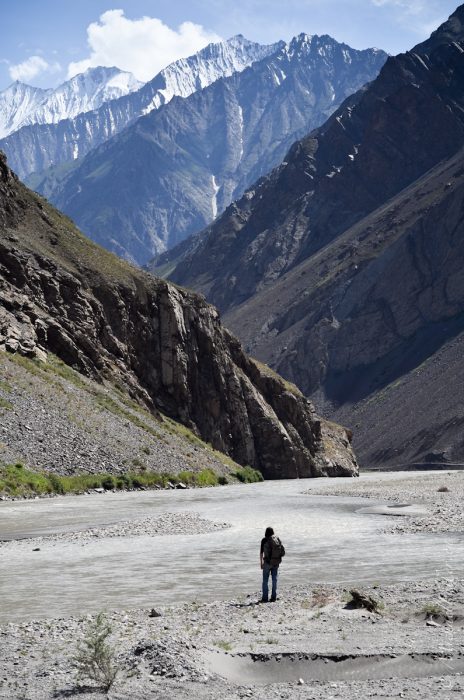 The lonely walk home on a deserted Tajik road (out of frame at right), two hours before we met Dog & Crapper. 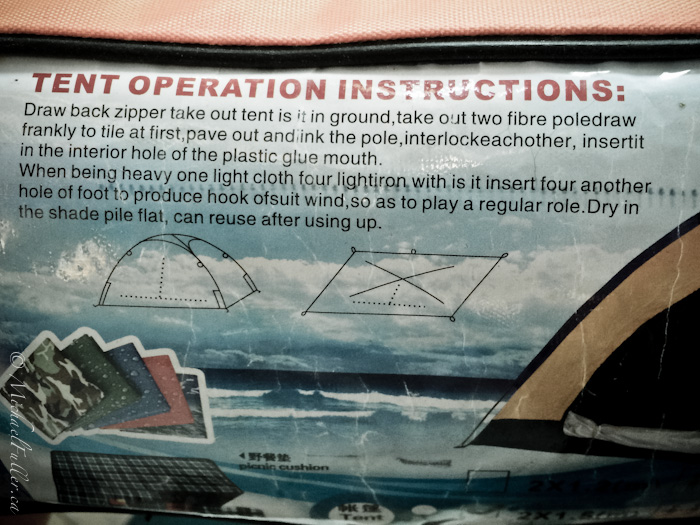 Our $20 tent ‘Oliver’ came with easy to follow instructions

We were trying to thumb a ride back to our base town, as all the public marshrutka buses had stopped for the day. That’s when this broken van came clunking along and lurched to a stop beside us. Two friendly young guys offered us a lift, we negotiated a fair price (a total price that is. Always be clear prices aren’t per person), and we jumped in.

They introduced themselves, and Mozen, who understood some Tajik turned to me. “They might be joking, but the two names I just heard them say mean Dog and Crapper.”

Immediately, these two young men surprised us – pleasantly: Before we departed, they wanted to pick up a spare tyre. How responsible of them.

Such pleasant surprises wouldn’t happen again. In fact, this initial showing of foresight only served to heighten our expectations. Expectations which would soon be drop-kicked.

And they journey begins…

We bounced out of town, Crapper in the driver seat in front of me. He puts a CD in the stereo, and a song begins playing with shrill singing and a thumping beat. Another song plays, which sounds similar. Then another.

Sometimes, foreign pop music all sounds the same to me.

During these songs, Crapper had stalled the engine about once per song, and Dog in the passenger seat yelled at him, presumably about how to drive this rust-bucket.

A few minutes later, the backrest of Crapper’s seat pops loose and swings down into me. We stop the car to fix it.

The next official stop is a police checkpoint. This is the Afghan border after all, and security is tight: probably due to the booming opium smuggling trade. When Crapper comes back to the car, he finds Dog in the driver’s seat. A fight ensues.

Crapper is appearing ever more drunk / high / cracked-out (or a combination of the three) so this is a fight we hope Dog wins. He’s older, and presumably the more sensible of the pair.

But they’re wearing each other’s hats. 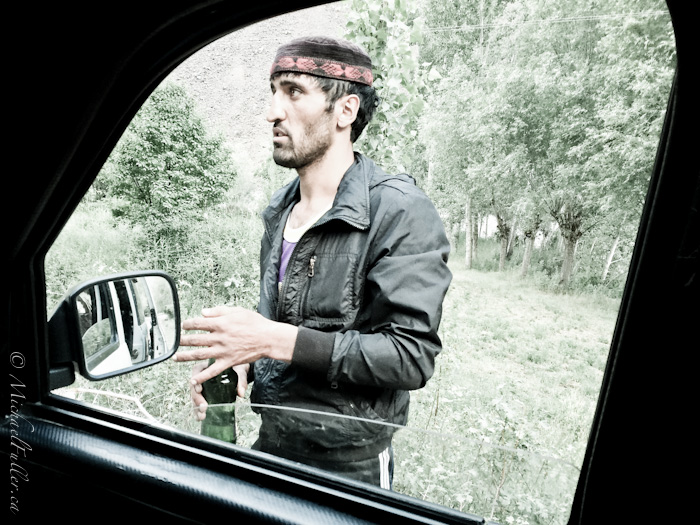 Dog, in his original hat, at one of our many unplanned stops

By this time I’m certain the songs we’re hearing aren’t just similar – they’re a single song stuck on repeat. This doesn’t seem to bother the boys, but when the stereo begins skipping as the road gets bumpier, Crapper tries to sort it out by ejecting and reinserting the CD a few times. No success.

So he calmly ejects it one final time, places it in his palm, and with his other fist punches it to pieces. He throws the shattered shards out the open window. Now that is what I call problem solving.

Soon after, Crapper is chewing tobacco. I’m alerted to this fact when I feel a spray of liquid on my face through my open window. Crapper is spitting his tobacco juice out of his window in front of mine.

A few minutes later we stop. The boys have spotted their friend, a fit young sporty guy who even speaks a bit of english. They invite him to join us (we’re going to the big town after all!), and he seems to be completely sober (so too did Dog and Crapper, when we met them). Curiously, Sporty acts completely comfortable with Dog and Crapper’s behaviour – suggesting they’re either always this ridiculous when they’re sober, or they’re always under the influence of something.

If we were enjoying any of this crazy random behaviour just a little, it ceases being fun at our next stop. A young girl is on the side of the road, and Crapper literally skids the car to a halt when he sees her. My face smashes into the back of his seat. (“Sorry”, says Sporty on behalf of his friend).

Crapper jumps out of the car, slides open the van door, and grabs her. He’s trying to force her inside. At first I thought he was joking with a friend. Then Mozen overhears him making a sexual comment, and it’s now apparent that even if she does know him she’s not his friend, she’s not laughing – and then, she’s screaming. Dog jumps out of the car. We expect him to fight off Crapper. But instead he tries to force her in too.

We are in shock at these two. Everything that had happened up to this point was ridiculous, yes. Dangerous, probably. But funny, at least a little. This was beyond the line. Thankfully young Sporty yelled something at them before we had to, and they let her go. 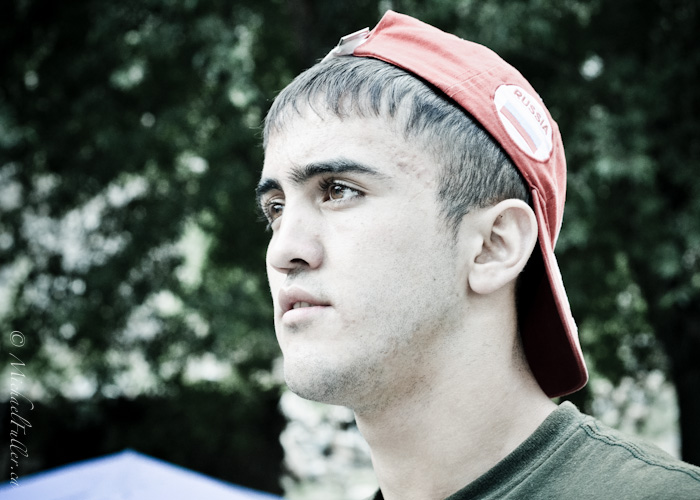 The young Sporty, whom we picked up en route

After this curious incident, Dog steals the driver’s seat, and Crapper begins chain-smoking in the passenger seat. At one point he has trouble lighting his matches. In frustration, he throws his matchbox out the window, hitting a man in the head.

Two minutes later, Crapper, still holding an unlit cigarette, says something to us. which Sporty translates:

“Do either of you guys have a light?”

We didn’t. Bored without cigarettes, Crapper begins climbing out the window of the car. We’re driving at full speed. Soon his feet disappear from view. He’s sitting on the roof of the car. 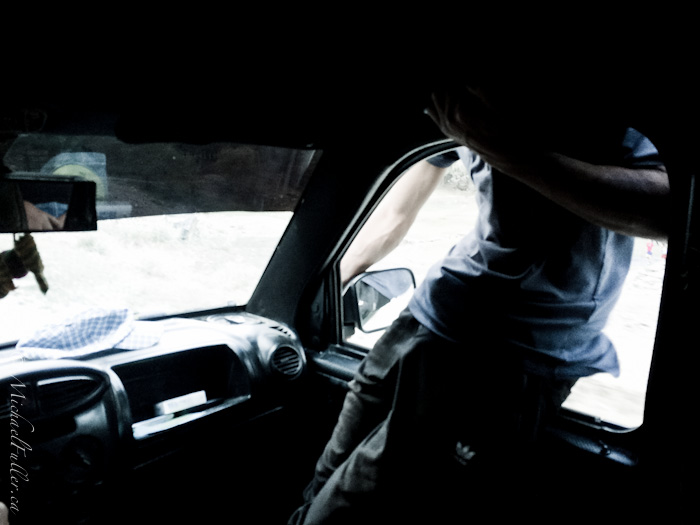 Why sit inside a car, when you can climb onto the roof? is what Crapper must be thinking, if he’s thinking at all

Minutes later, Crapper has climbed back inside, and Dog is going up a hill when the engine begins to sputter. We’re a little worried, as it’s still an hour to our town and something appears very wrong with the engine. It soon dies completely, and they can’t restart it.

Crapper begins pulling out wiring, twisting things together. After ten minutes, he seems to hotwire it, the engine starts, and we’re moving again with Crapper at the wheel once more. 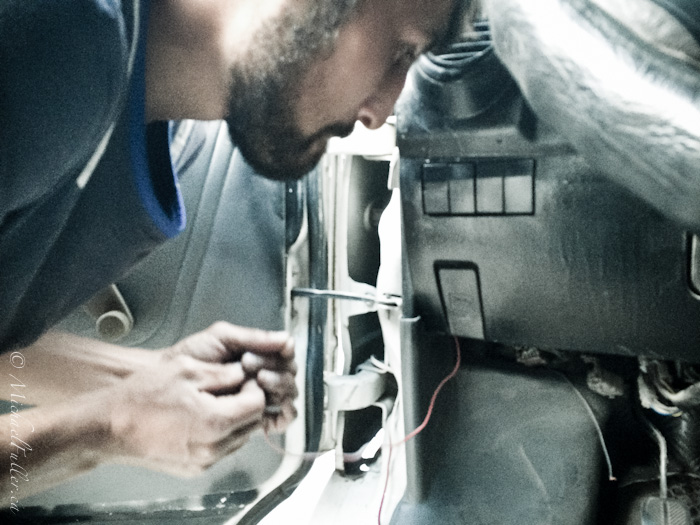 Until he sees a roadside bazaar, where he cuts the engine, leaps out of the car, and runs into the bazaar, and straight through it. As he approaches the stream behind, he tears off his shirt and dunks his head into the water. Then he sprints back into the bazaar, dripping with water, and buys a bottle of beer.

The women are all laughing at him, but we can’t read whether it’s from nervousness at his erratic and dangerous behaviour, or from knowing him and his typical antics. He chugs the beer, and with his hair still drenched, throws back on his shirt and jumps back into the driver’s seat. I think the whole stop lasts a minute. 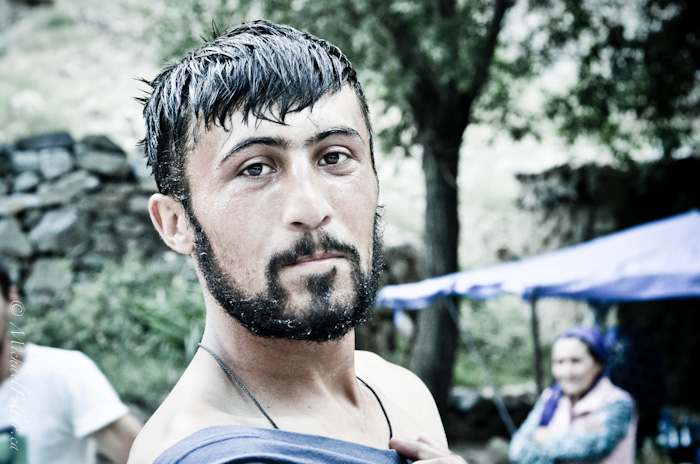 Over the next hill, our tyre goes flat. They jump out and are trying to use a bicycle pump to reinflate it. After a few minutes, they give up on this idea, and start jacking up the car. Good thing they brought that spare.

This entire journey on the way out (in a shared-taxi) took 45 minutes. But the return journey has already taken twice that time. We’re not sure we’ll ever arrive.

I think these thoughts as I watch the boys remove the flat tyre, get out the spare, and then… am I seeing straight? They seem to be putting back on the flat tyre they just removed. But I keep my mouth shut; they’ll figure it out soon enough.

After tightening the lug nuts and lowering the car, the boys discover their error. They get it right on the second attempt.

As we reach the outskirts of our destination town, we almost begin to celebrate. Then our little van’s engine begins struggling again, and we can only muster 5 km/hr. I smell petrol and wonder if we have a punctured tank, trailing a line of fuel on the gravel road, our engine running on fumes.

After a couple more stalls I expect we’ll be walking the rest of the way. But thankfully, the tyre would be the last major hiccup of the journey: we pull into town under engine power.

They drop us off, obviously eager (now that they were in the big town!) to keep the party kicking on, and unleash their irresponsible comical antics on a larger population. We hand them the agreed upon sum of money.

They say, “No, that was just the price per person.” Also known as the oldest trick in the book. We remind them of our explicit agreement from two hours ago – that the price is total, not per person.

They smile at us and shrug – an expression of, “Hey, you can’t blame us for trying!” And with that, their van sputters away into the night.

» Asia, Experiences » Our Ridiculous Ride on the Pamir Highway (Stans #8)