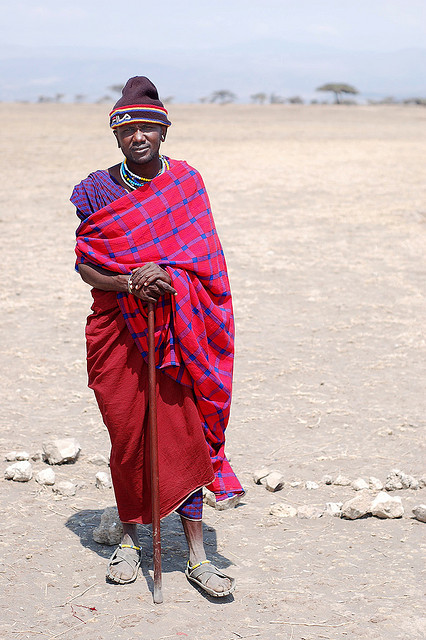 This son of the chief of our Masai village. In pure style.

I have returned from my safari to Lake Manyara, the Serengeti, and the Ngorongoro Crater. The wildlife was plentiful and we saw everything I wanted besides a rhinocerous (I’m told on cold days they hide in the woods.) We even saw a rare tree-climbing lion, and the very shy and hard to spot leopard. I also loved the elephant that charged towards our landcruiser, but happily ran past when we moved out of its intended path. But the wildlife wasn’t the highlight, it was the scenery.

The African Rift Valley extends from Ethiopia to Mozambique and represents a failed attempt by the earth to rip apart the continent. As a result a stunning landscape was created with sharp escarpments and steep valleys. On route to Serengeti, you climb an escarpment and look out upon the vast Lake Manyara. The lake seems enormous, because you cannot see across it. The air is not very clear, likely due to the dust created by the dry conditions of the season.

As you climb the escarpment up hundreds of meters, you eventually begin to drive along the rim of the Ngorongoro crater. This is the largest caldera crater in the world, formed by a massive volcano exploding and collapsing into itself. The views had to wait, because we drove up in the morning, and all we saw was an impenetrable fog and an increasingly thick jungle of vegetation. We saved the crater for last, and continued towards the Serengeti. As we descended back down the hundreds of meters to the plains, the scenery once again changed to dry savanna; the monotony only broken by an occasional stand of small trees or a kopje (granite outcrop) in the distance. As we approached the gates to the Serengeti National Park the plains seemed to get larger and before long, nearly the entire horizon was a laser-straight line.  I felt at sea. Perhaps this is what living in Saskatchewan feels like, minus the lions and giraffes.

We went to the crater last, and camped on the rim. We arrived in the dark and a thick fog was rolling in. The camp was packed full of tents and one huge umbrella tree loomed over everything, its silhouette just barely visible in the dark and fog. My guide advised me to move my tent away from the edge of the clearing – elephants and wildebeest frequently barge through. In fact, in the pitch dark that evening an elephant walked right into camp and drank from the water tanks, and a wildebeest loudly munched in the bushes just behind the toilets. The next morning we descended through the fog into the crater and witnessed another impressive landscape. This crater is a permanent home to many species like zebra, wildebeest, buffalo, elephants, lions, and rhinos. And everywhere you turn there are huge herds running past you, or a lion sleeping only a few dozen meters from some overconfident zebras. It was marvelous. 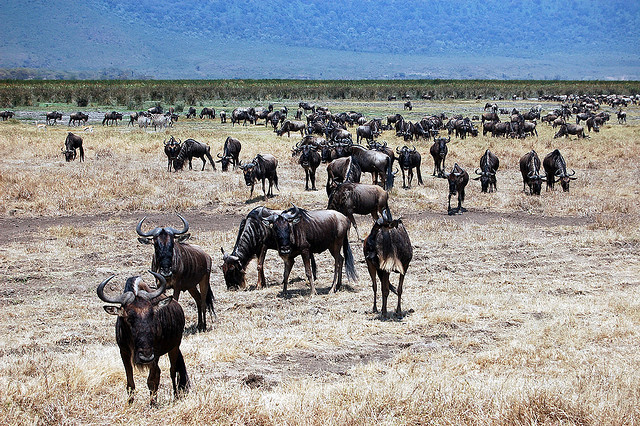 The whole safari was very cheap, because of course I chose the cheapest budget company I could find. I was considering going with the second cheapest option, but when the cheapest option director mentioned the group would be me plus three young ladies, it pretty much sealed the deal. Boy was that a mistake.

My luck would put me with three British gals who had never camped before. Never even slept in a tent either. And being a budget safari, we were putting up and taking down our own tents each night. Rather, that’s what supposed to happen. Instead, I was doing everything. And these are old-school canvas tents with broken poles and bent pegs.

The first night I was showing them how to put up their tent and one said to me “But Mike, we don’t need to learn how to put up a tent. We never go camping.” One morning I even had to lend them my torch (they only had 1 between them), and pack my belongings in the dark. Then take down and put away my tent in the dark. And they still hadn’t even finished packing. But they learned something about camping and I learned something about patience, and we all got along in the end.

Two of the girls had SLR cameras, but one of them really said some silly things. Like “SLR – Standard Light Reflex” or after using my camera for a photograph she commented “Hah! Nice fake-shutter sound” (my camera’s a D-SLR and makes the same mirror-flip sound like every other SLR).

My favourite quote of the trip was the night we rolled into the very basic camp in the middle of the Serengeti, where lions have been known to sleep with their head against your door. This camp has no power or running water, and only pit toilets. She asked, “Where can I charge my iPod?”. Classic.

I’ve since left Tanzania and spending a week in Kenya. I’m in Nairobi now and the people are even nicer than in Tanzania, and the city seems even safer than Arusha or Dar es Salaam despite what the guidebooks say about the dangers of Nairobbery. I’ve found a wonderful backpackers hostel, which is harder than you think in East Africa. (This place isn’t well set up for budget tourists’ accomodation, like South America or Europe is. Most tourists to Africa are very wealthy, so the area’s never short of $500+ hotels).

As usual I’ve been posting photos on Flickr (click thumbnail above). More are coming when I can find a card reader. The last hostel’s computer fried mine. At least it didn’t fry the photos too.