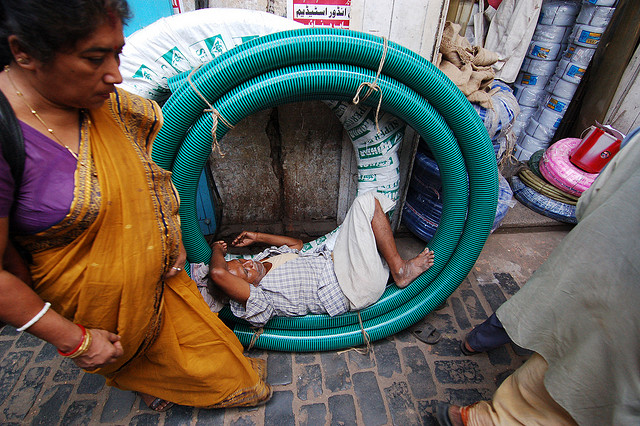 Our next destination was the northwestern Indian hill station city of Darjeeling, famous for the tea grown on sprawling plantations nearby, with gorgeous views of the Himalayas including the tallest and third tallest peaks on the planet. From Kathmandu our choice of transportation was a 17 hour bus ride along some of the most treacherous roads, passing many burnt out wreckages of unlucky buses; or, a 45-minute flight. It wasn’t a difficult choice. And the flight only ran an hour behind schedule, which I deem quite a success.The winding mountain road leading to and from Darjeeling is lined with bright, hand-painted signs of caution to potential dangerous drivers. We delighted in reading the clever messages, and can recall a few:

In Darjeeling we awoke early to watch the sun rise from a popular indoor lookout built on Tiger Hill. Hundreds of Indian tourists traveled from far and wide for this event and we found them to be quite the spectacle. A pulsing mob of people crammed us into the corner of the room against a window, shoving and clambering over each other, knocking me down into my seat a number of times, in order to take photos of…..

A thick fog, enveloping the entire hill. I grew frustrated at the insanity and complete lack of photo opportunities, so I crossed the room to find a clear view of the tallest mountains in the world, bathed in a beautiful pink morning alpine glow. And to get a clear photo, I only had to shove a couple people out of my way — the mob was all staring into the fog hoping to glimpse the sun rising over some unremarkable hills.

When the fog did part (a little) an uproar of cheers erupted from the crowd. It’s the first time I’ve ever heard people hooting, clapping, and cheering for a sunrise.

The restaurant service in many of the establishments we’ve visited has been less than stellar. Of course, when people are making $2 a day you cannot expect prompt and friendly service, but I’ve begun compiling a list of some of the hilariously bad service we’ve received.

In one very posh Kolkata bakery the only cashier was unable to serve the customers, because he was busy having a conversation on his mobile phone. In a famous Darjeeling tea house /coffee shop we were told flatly that they had no croissants, when we could plainly see a pile of them beneath a sign marked “croissants”.

At a swanky hotel restaurant in Nepal we were first told they wouldn’t serve a la carte meals — only the overpriced buffet. But then they changed their minds. We sat down and ordered a milkshake — but were told they had no milk. Minutes later they changed their minds and brought us the drink. I ordered a veggie burger — but was told they had no bread. I offered to go out to the street and pick some up — and then suddenly yes, they did have bread.

We both asked each other if we looked or smelled wretched, not able to believe that the waiter was so clueless.

When riding the Metro here it’s quite apparent that pushing and shoving is a part of the game. No matter how many people are crammed in the train car and preparing to exit, the incoming passengers will force their way into the car, slowing or preventing the escape of the outgoing passengers as they plug the door.
When we flew domestic from Kolkata to Delhi we witnessed another incarnation of this behaviour. Seconds after the plane landed and began taxiing off the runway, nearly everybody leapt out of their seats, opened baggage compartments and crammed themselves into the aisles pushing up to the door. I could only shake my head and laugh. Even my Indian seat-mate chuckled in agreement.

Much like in China, I felt remarkably safe throughout the entire trip. Probably because the country is so crowded, one never feels isolated and vulnerable to kidnapping or mugging. The morning of my final departure from India, however, was an exception.

In the early hours of the morning my pre-arranged taxi showed up and the driver came to the door. But so did two other men, apparently coworkers (or accomplices?) of the taxi driver. I suspiciously entered the cab, wondering why three people were necessary to pick me up (unless I was going to be kidnapped. Then three was the optimal number). Fortunately the extra two never joined me in the cab.

As we neared the airport, I could see a man standing alone at the roadside. My cabbie slowed down and the man got in — without a word or even a glance exchanged between them — and we drove on. Once again I became suspicious, but it was overshadowed by my feeling of entertainment at the creepiness of the ride thus far.

Near the terminal minutes later, just as suddenly and silently, we slowed and the man handed some change to the driver and got out. I wouldn’t be kidnapped after all.

Through the long plane rides back to Australia I looked forward to the comfort and normality of a sensible Western society. After an uneventful jaunt through customs, I left the airport after 1am and found a taxi queue of more than forty people. Incredulous, I investigated and found that all the taxis were lined up single file like a McDonalds drive-thru, picking up passengers one group at a time, before depositing the required $2 to raise the gate and exit the drive-thru. There were plenty of cabs, but this idiotic arrangement was significantly slowing them from collecting all the passengers.

Apparently I had been away from Western Australia too long, because I forgot that WA isn’t always a sensible Western society.

The photos are mostly up now, but stay tuned for a few more. Click the thumbnail above to view.Thanks for all the comments everybody. Until next time,