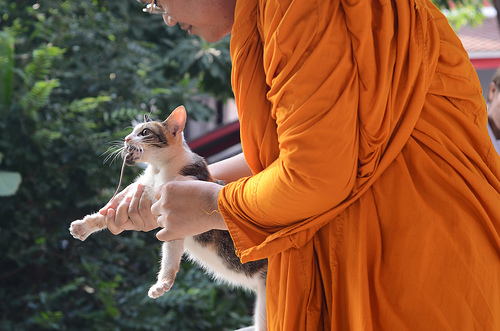 As the tuktuk crossed the bridge, coming towards me, two plastic bottles flew out and landed in the river. I gave the two backpacker passengers my best look of disappointment. The locals litter enough without us farang (foreigners) contributing. After this, and some other encounters with the touts and tourists in the infamous Khao San Road area, it wasn’t difficult to say goodbye to Bangkok (or as my friend calls it, the “den of sin”) after a day. As lovely as some areas probably are.

I boarded a sleeper train and awaited my three cabin mates. Would they be Thai or foreign? Old or young? Traveling or working? Then, a tall, muscular, and tanned fellow about my age appeared with his bombshell blonde girlfriend. They could have both been models. And then a greying middle-aged man. We all shook hands and introduced ourselves, though the older man didn’t return the favour, mumbling an awkward ‘hi’. The young couple, from South Africa, turned out to be interesting and insightful conversationalists over the next few hours, contrasting the nonspeaking and unnamed older cabin mate, whom someone decided we’d call ‘Evgeni’.

One of the topics we discussed was the incredibly popular Thai king, reigning now through eight decades. But we only said good things, since many Thai and foreigners alike have been jailed for insulting His Majesty. The country is packed with photos of him, mostly decades old, and Thai people say he is a really nice guy. But we thought: Of course he is! Why shouldn’t he be? He has lots of spare time, tens of billions of dollars, and a job for life. It shouldn’t be hard to splash around some cash, kiss some babies, and smile for the cameras.

Throughout our conversation the temperature was steadily dropping in the car. We were on a frigid air conditioned car, chilled to about 16 degrees, because I didn’t know I could have had the non-AC fan car instead. For cheaper! What a rookie mistake. With our regal discussion concluded, I shivered myself to sleep. 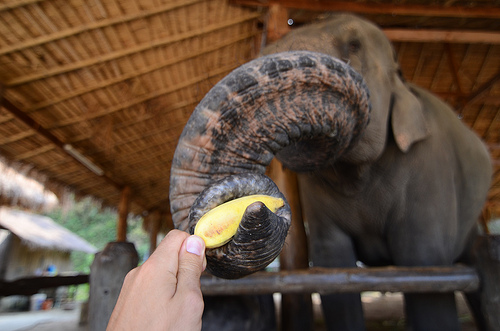 In past travels I have often moved too quickly between destinations to develop any feeling for the rhythm of a place. This is usually because either me or my travel partner have very limited vacation time, and we get carried away with trying to see all the most amazing things before returning to the “real world”.

Since this trip is longer, and I am alone for most of it, I was able to spend over a week in Chiang Mai. By the end I had discovered an awesome pad thai vendor, coffeeshop, vegetarian restaurant, and hostel with garden hammocks. I also built a little circle of lovely yoga friends; and learned how to use the machines on the street to dispense filtered water to refill my bottle, saving a heap of plastic bottles from the landfills! (one of the most annoying aspects of traveling in the developing world is how many plastic bottles you need to consume)

I spent New Years in a mountain town called Pai that has grown massively in popularity among Thai people after the release of a film called “Pai in Love”. So I was lucky to avoid the crowds in town at New Years, by staying outside of town on an incredible permaculture farm run by a brilliant Thai man. (Permaculture is a method and philosophy of designing settlements based on relationships found in nature; i.e. self-sustaining and interrelated systems).

Many of the dozen other travelers there had stayed for weeks or months, and some had returned for multiple stays over the past few years. Nearly everyone had their own bamboo bungalow in the forest to sleep, and shared in the work of cooking, cleaning and building. Even though my time was short I learned about sustainable building techniques by getting filthy making mud bricks all afternoon and watching some others build a bamboo bungalow.

Sadly I wasn’t able to stick around because my friend was arriving from Perth, but it certainly opened my eyes to this sustainable way to live, and I plan to return for a long stay to learn more in the future.

New Years’ was also unforgettable. My fellow permaculturians and I went to a concert in an art gallery courtyard. Everyone lit paper lanterns and set them floating skyward, creating an amazing scene with hundreds of floating lights filling the sky like stars. Plenty of lanterns got caught in the trees, which created a wonderful glowing ambiance of burning branches and potential forest fires. It was magic. 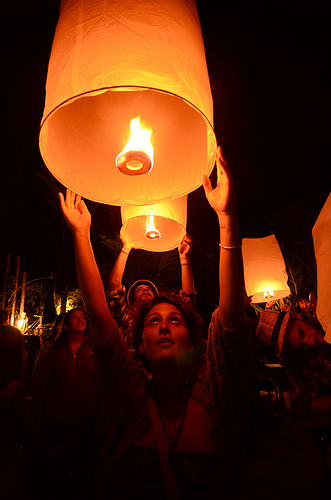 And for some more photographs and mini-stories, visit my Flickr photoset.