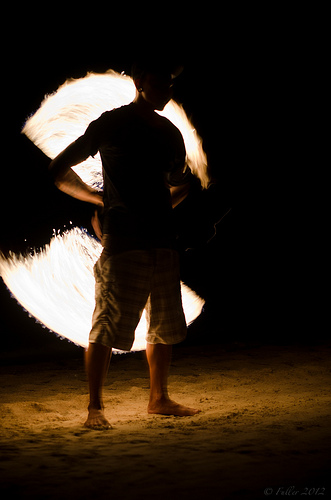 During the ten years beginning in the mid 1960’s—while the world was watching the Vietnam war unfold—an unpublicized and illegal ‘secret war’, denied by the USA until 1994, was being fought in Laos. Despite both America and Vietnam maintaining official acknowledgement of Laos’ neutrality in the war, the Vietnamese were running troops and supplies through Laos. And America, in reply, was dropping cluster-bombs across the Laos countryside. A lot of cluster-bombs.

To be exact, over half a million bombing runs—that’s on average, one run every 9 minutes, for 10 years. That’s more than the US dropped on Japan and Germany combined in World War II. That’s enough to give Laos the unfortunate title as, per capita, the most heavily bombed country in history.

The long-term trouble with the cluster bombs is that a quarter of them don’t detonate on impact. So even now forty years later, a quarter of all villages in Laos contain unexploded ordinance (aka ‘UXO’), lying like land-mines in farmers fields, in household yards, and under school playgrounds. Most of these UXO are ‘bomblets’ the size of tennis balls, loaded with ball-bearings that’ll shred anyone nearby—not just the person who sets it off.

In Laos’ capital Vientiane, I learned all this while visiting the fascinating education centre at the Cooperative Orthotic and Prosthetic Enterprise (COPE). Since the secret war ended forty years ago, over ten thousand Lao have been killed or maimed by UXO. The people at COPE help provide disabled people with physical rehab, and locally designed, custom built prosthetics.

Visitors can help support the enterprise buying handmade souvenirs, clever cartoon postcards made by a local artist, or even a locally made prosthetic limb for a victim of UXO. The people at COPE have managed to present this ongoing tragedy infused with a message of hope. Lao in the remote villages are getting education programs using plays and songs, and foreign demining organisations are helping to train local people to destroy over a hundred thousand items of UXO annually. And justly, the US provides aid to remove Laos UXO.

As if war wasn’t senseless enough, consider this: America’s modern day funding for the removal of UXO in Laos is almost exactly what they spent on the bombing missions to put them there in the first place. 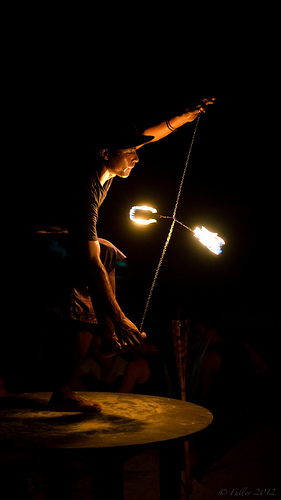 Perhaps the most interesting rewards of travel are the stacks of interesting folks I encounter along the way. On this trip I became acquainted with people from every proper continent (still haven’t met an Antarctican), aged from seven months to seventy years. Their occupations ranged from missionary to marijuana farmer, army to art therapist, brain surgeon to bum. I encountered the whole gamut of perspectives on the world, and on the curious egocentric bipedal primates who dominate it. Here are some of their stories:

I met an Italian, Andreas, whose wife left him suddenly, just a month before our meeting. They had been together for 17 years, including a year of separation before patching things up. She left him for another man. I couldn’t imagine his heartache: he decided almost immediately to depart on a 1500 km solo bicycle trip across Thailand. He told me he was, “healing, one kilometre at a time”.

In a riverside town in northern Laos without roads or Internet, only accessible by a precarious ninety-minute river boat ride, I met three crazy Germans who planned to construct their own bamboo raft and navigate it eight hours downstream to Luang Prabang. When I checked their building progress, things were progressing as entertainingly as I suspected. My friend Umut’s hands were raw and bleeding from open blisters. “I’m ruined,” he told me, still picking out leeches from between his toes.

After a day of chopping and hauling bamboo out of the forest they tried to float the roped-up bundle downriver to their building site. It quickly got taken by the current, and they along with it attempting to save it. If it wasn’t for a friendly Lao boatman passing them after sunset, they would have either lost the wood or drowned trying to save it. At this point I inquired about how many boats they had built before (let alone navigated through rapids, without paddles). Their leader responded casually, “None. I’ve never built a boat before. But come on, this is easy stuff: I’m an engineer.”

I was suddenly reminded of a quote I once heard:

“If a man is a fool, you don’t train him out of being a fool by sending him to university. You merely turn him into a trained fool, ten times more dangerous.”

On a long train ride I met an engaging young British writer/director/videographer named Craig. We chatted for hours about the world, and when I checked out his website later, I discovered that he won the Doritos ‘King of Ads’ competition for his self written/directed/filmed commercial.

I also found a funny news interview of Craig explaining how he took his prize cheque, bicycled it down to the bank, and received some funny looks from the depositing teller as he glanced at Craig’s scruffy beard and torn shirt, and the £100’000 cheque he was trying to deposit.

We rented our catamaran from a grizzled old Dutch sailer named Kris. He captivated us with tales from flying aircraft aid missions in the Congo and Nigeria in the 1960s, and sabotaging Shell operations when he discovered first-hand the atrocities they were committing in villager. He claims to have even personally killed some Shell employees that he knew to have orchestrated mass murders of villagers. I asked if he was a wanted man, to which he replied “No, but I’m not welcome in South Africa anymore.”

There was a middle aged American named Dave I met on a night-ferry, who fought to keep his high-maintenance wife from corrupting his kids’ potential free-spirited attitudes towards travel. She always wanted five-star accommodation for their trips, so he had to provide balance—he took his two young daughters to live a summer in a remote Ethiopian village. He described the village chief as clothed only in a thin vine tied around his waist. The chief explained he wore the vine “because the missionaries don’t want us to be naked.”

Dave described the appearance of nearly all the women of the village (who protected their cattle herd from south Sudanese bandits): a shaved head, rippling muscles, wearing only a loincloth, an AK-47, and two crossing straps of bullets between their bare breasts. Years later, Dave’s kids turned out pretty well. 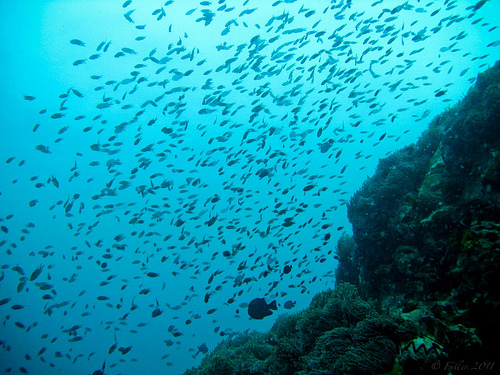 One of my main reasons for traveling is to live a perceptibly longer life. I’ve always felt that a week in a foreign land feels like a month at home, and neuroscience can back me up with the mechanism of how this occurs: When the brain is recording more information and more detailed memories, moments seem to last longer.

Remember when you were five and a year felt like an eternity? As you age the world becomes more familiar, which means less information recorded, and the perception of time passing more quickly. This trip felt huge, because of the diversity of landscapes, people, and activities I experienced. I learnt new skills in yoga, cooking, meditation, elephant mahouting, sailing, and scuba diving. At this rate I feel like I’ll live forever—or at least it’ll feel like forever (and our perception is our reality).

The end of my six-week trip could not have been better. Of my final ten days in Thailand, all of them involved time on a boat, including sleeping six of the nights. I finished up with five days of scuba diving in one of the best diving sites in the world, Ko Tao.

But before that, with four friends, we chartered a 33′ catamaran in Phuket for four days and sailed the Andaman coast in Phang Nga Bay; a place of striking beauty, where near-vertical blades of karst and needles of rock stab at the sky from deep below the surface. We stayed one night in the protected cove featured in The Beach, and passed by the island famous from The Man With the Golden Gun.

Each night I slept out on deck, on the netting between the hulls, rocking gently in my giant hammock*. We snorkeled off the boat, and swam through short underwater caves, enveloped by schools of fish. There was nightly bioluminescence in the sea—one of my favourite phenomenon—allowing us to bathe in a glowing aura of microorganisms. And somehow, each night, without any rain or proper clouds and the brightly starlit sky above us, we witnessed lightning. 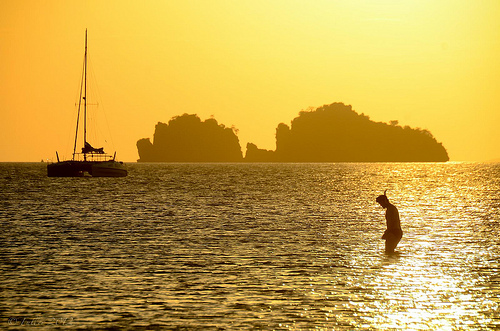 Dear me, this post was a rather lengthy one! I got carried away, knowing that it may be a while until the next one: On my first day back at work I asked my boss when I could have my next holiday. Considering that I squeezed out 11 weeks of leave in my first year with the company, his response was a hearty laugh and a head shake.

For more inspiration on ways to live forever, check out the last of the trip photos by clicking any of the thumbnails.

Thanks for making it this far, and for all the lovely replies. Until the next time the universe conspires to bring us together,
-Mike

*For a clip of our sailboat, our dingy, and some enormous schools of fish, check out my Youtube channel.

2 Responses to How to Live Forever (Thailand/Laos #4)