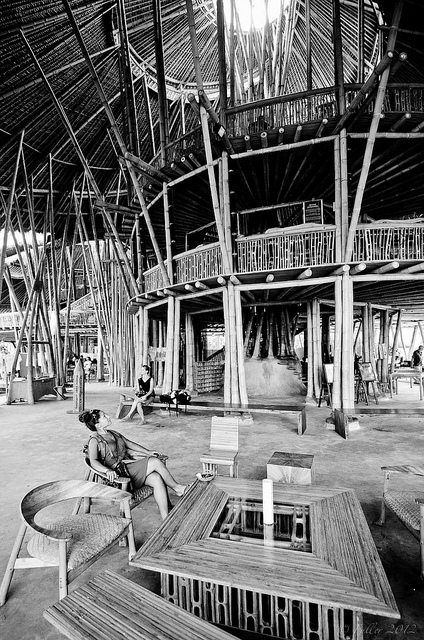 It wasn’t hard to spot the little man in the big crowd outside the airport. He was holding an A4 piece of paper penned boldly with “FULLER”. The man was distracted on his mobile phone, but I called his name and he smiled widely and welcomed me to Bali. He apologised sincerely for being ‘so rude’ as to have been sending a text message when I arrived (which I reassured him was not offensive in the least), then he offered to carry my bag and then to fetch the car and return to save me 5 minutes of walking. I refused both his polite offers. And hoped the rest of the Balinese would be as nice as Nyoman.

The drive took forty minutes, all the while we chatted and he taught me about Balinese culture. I learned his name means ‘Third-born’ in the farmer-caste, and is an understandably common name on the island—I estimate there are only two names more popular. Most people have informal names their friends call them. Since I always love having a local name (to make locals laugh) I asked for Nyoman’s help. He dubbed me “Madeh”, which means ‘Second-born’.  I wasn’t particularly impressed with his creativity.

So I asked him again, and he added the personal name ‘Purrrnama’ (rrroll yourrr Rrrr). It means ‘Full-moon’, which puzzled me until he added, “Because you’re FULL-er”. Ah. It also means ‘strong building’, which is an added bonus, if you’re an engineer. 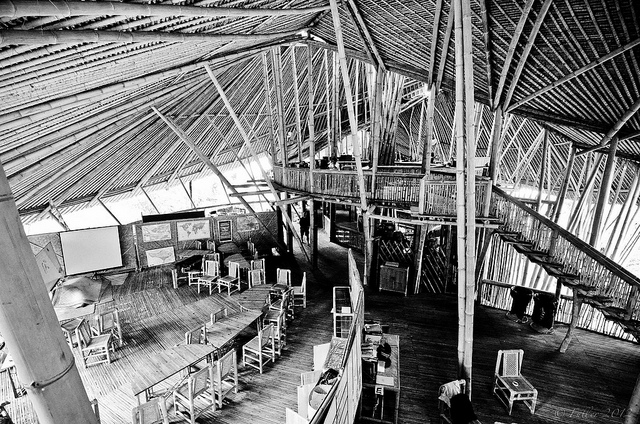 It’s not easy being green

We soon arrived at Jenya’s workplace, the Green School—now deemed the world’s greenest school, and an architectural masterpiece. One of their claims to fame is that they have the only ATM in the world built from bamboo, bolted into a rock, and powered by solar panels. As my good fortune had it, I arrived on their most important day of the year (Earth Day). The celebration assembly ended with a performance by their resident fifteen-piece percussion band, composed mostly of tiny students playing massive marimbas. And I was one of the two-hundred people dancing.

As I wandered around in awe of the place, Jenya and a veteran teacher Mary chuckled to themselves something about me being “in the Awe stage”. Mary went on to explain to me the “Ten stages of Green School”. The next stage was Confusion, where you ask questions like ‘Why is a sewage truck coming to empty the composting toilets?’ and ‘Why don’t the solar panels generate electricity?’.

Stage 3 is Frustration, 4 is Anger, and 5 is Despair, which occur when you’re yelling over the noise of students in adjacent open-air classrooms, the wind is blowing papers off students’ desks, and the leaky roof ruins your textbooks and causes the computers to electrocute students. Stage 6 is Numbness, then Apathy, 8 is Sarcasm, and the 9th stage is Acceptance.

After a teacher moves through these nine stages, they eventually end up close to where they started: Stage 10 is Bliss. But the spiritual, peaceful kind of bliss, not the overjoyed type.

I’m certain in my brief visit, as I wandered the school grounds gaping in disbelief, I never left Stage 1. 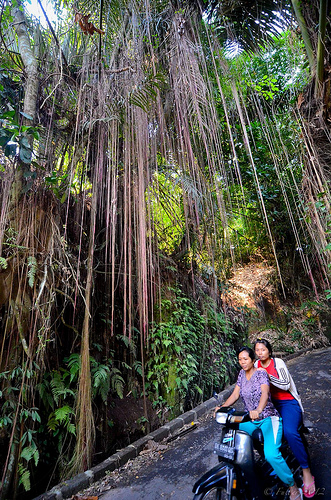 I find a lot of satisfaction trying to experience the pace and rhythm of local people’s daily routines. This can often lead to wonderful random encounters that would be impossible to recreate. In the multitude of narrow alleyways entwining Jenya’s flat, I wandered in the magic hour before sunset looking for photos. I watched women set out offerings and children fly homemade kites. I navigated by noting from what intersection which stray dog barked at me.Even the familiar was anything but: Locals slurped rice porridge for breakfast at McDonalds, where the service was so terrible it would be a joke to call it ‘fast’ food. Fortunately, the street / beach-shack food, prepared before you from fresh ingredients, cost a fraction as much. An exceptionally friendly woman made me gado-gado in five minutes, for a dollar, and it was the best meal I had in Bali. 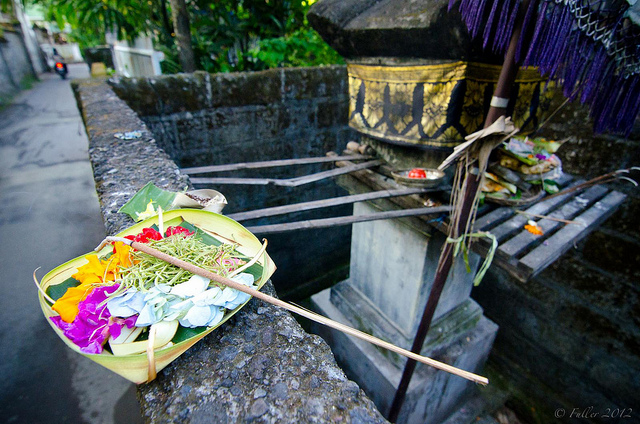 Which is the Hindu god of materialism?

The Bali airport was simply astounding. While most of the world’s airports resemble shopping malls, Ngurah Rai airport is actually a shopping mall that resembles an airport. Nine gates, and ninety shops. Well that’s fine, you say, you don’t have to shop, you can just sit down and wait for your—oh what! No you can’t! There aren’t enough seats for even half the passengers in the terminal.Thankfully those gracious airport owners have built a luxury lounge you may pay to enter if you really need a chair. Or you can eat at one of overpriced restaurants (if you have any rupiah remaining after your—surprise!—$15 exit tax). I opted to stretch out on the tile floor, my backpack a pillow, and read my book. 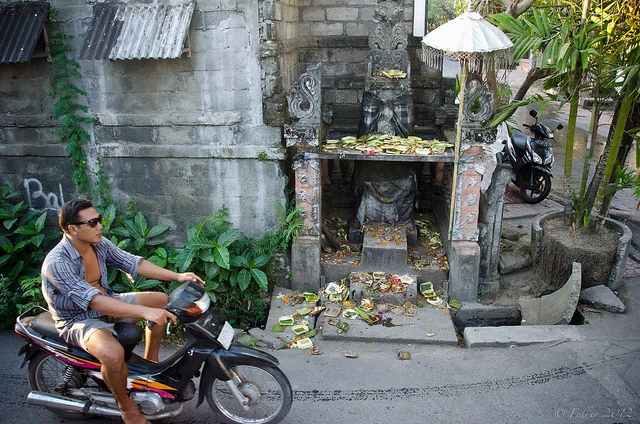 Now, here’s the awkward bit. I wasn’t in Bali long enough to learn to say goodbye. Though I could say “Oh my goodness!”, which was arguably more useful.