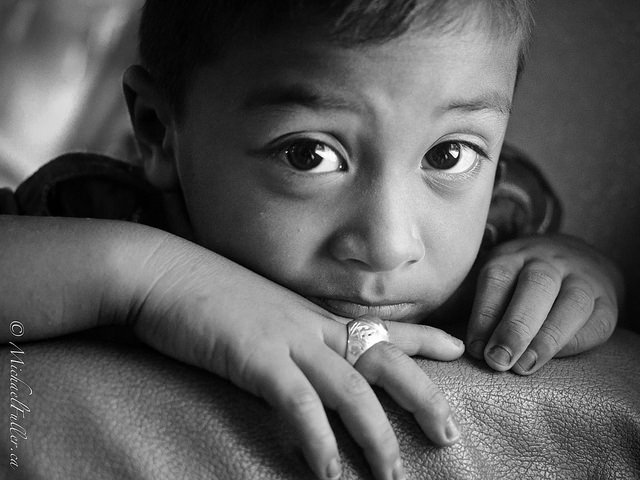 THE ACEHNESE GRANDPARENTS in the seats beside me were glowing like a pair of newlyweds. As Grannie struck up a conversation, the rusty gears of Indonesian inside my head began turning once again. The oldies were returning from a trip they’d saved their entire lives to take. The Hajj. They’d visited Mecca.

Welcome to Aceh. The self-proclaimed “doorstep of Mecca” within Indonesia. A name known for all the wrong reasons: civil war, sharia law, and the tsunami.

My nighttime arrival from the airport into Banda Aceh, the capital, was no less ominous. The dark sky was thick with storm clouds as I searched for my hotel. I saw no lightning – but suddenly felt a crack of thunder. It was so loud it set multiple car alarms blaring.

When I travel, I collect stories. From people or from paper, I later assemble the pieces into these Experiences.

The stories from Aceh have given light to a theme that’s rather dark . I want to ensure you that Aceh today is by no means a sinister place. It’s remote and beautiful, where jungles descend from mountains to kiss the ocean. The proud Acehnese have just enjoyed the most prosperous ten years of their lives.

This may not be the lightest Experience, but these little stories deserve some air. Many of them were buried when they occurred: Buried from the media who were understandable absent during the rebellion, and overwhelmed with stories during the tsunami; or buried along with the people who died prematurely – by gun or by God – over the two decades before the 2004 tsunami.

If nothing else, they’ve reminded me once again to be grateful. IT WAS HARD TO MISS THE ENORMOUS SCAR across the forearm of Little John, my becak (motorised rickshaw) driver. When he saw me noticing, he told me, “I was caught in the tsunami by a wave of debris. It carried me through my village.”  He lived only a few kilometres from the coast, outside Banda Aceh. “I grabbed onto a tree. Some rope wrapped around my arm. Somehow I escaped it, but it cut me deeply. When the next wave came, I climbed as high I could into the tree. And I held on.”

His family was lucky to be far inland that day. His cousins and sister, not so. They were a few of the more than 160,000 parents, children, wives and husbands in Aceh swept to their grave by the 2004 Boxing Day tsunami.

John pointed at a coconut tree beside us. Its smooth trunk curved 10 metres into the blue sky. “After the last wave, many people were stuck on top of coconut trees. They couldn’t climb down!” He laughed. Squinting up at the fronds put the magnitude of the tsunami in perspective. 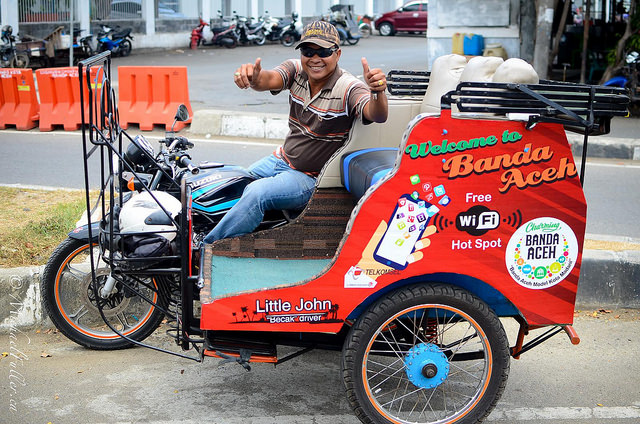 Little John, and the only wifi-enabled becak in town. (it didn’t work)

When I first heard about the tsunami, I somehow imagined Banda Aceh was some small town. Hardly. The population of 200,000 watched their city thrashed to pieces by the sea that morning. For a third of them, it was the last thing they ever saw. Over half the city’s buildings were destroyed.

The people of Banda Aceh had 15-20 minutes between earthquake and tsunami arrival. But even with an hour’s notice, nobody would have known what to do. Historical tsunamis exist outside the living memory of Acehnese, and weren’t taught in schools. One local shopowner thought people were running from the police! When he decided to trust their warning, he only had time to stuff the contents of his cash register (a.k.a the drawer of crumpled notes) into his pockets and run too. He survived by climbing atop a four storey building.

Now people are given tsunami education at school. And ‘Evakuasi Tsunami’ directional signs are placed all over Aceh, especially down the coast in Lhoknga, a surf town closer to ‘ground zero’ where I caught some waves. Ones of manageable size.

Lhoknga had no four-storey buildings, and is located on a flat, kilometres from any hills. There I heard the ultimate story of life-saving serendipity. One Australian, living there with his Acehnese wife, had been gifted a book for Christmas. The subject? Famous earthquakes.

If this isn’t the ultimate advertisement for reading books, I don’t know what is.

“That book’s the only reason they survived. As soon as the earthquake stopped, he rounded up his family, jumped into the car, and sped towards the hills,“ a friend of the man relayed to me. “It was that close. He saw the wave crashing in his rear-view mirror as he raced down the road, with bodies bouncing off the bonnet.”

It’s hard to imagine the pandemonium of hundreds of people attempting to escape by running, cycling and driving down the narrow streets. Or how it must feel to be forced to drive over your neighbours to save your own family.

The same man who relayed this story was an expat who’d fallen in love with Aceh, lived there over a decade, and even converted to Islam. He was away visiting his mother for Christmas in 2004; his Acehnese fiancé couldn’t travel with him. He never expected that goodbye to be their last.

“They found her body in a tree, five kilometres away.”

Such was the magnitude of destruction in Lhoknga. With the sea so close, and the hills so far, few people survived. It made the damage in Banda Aceh seem minor by comparison. The town was completely destroyed except for one building, the Rahmatullah Lampuuk Mosque.  Some say it’s because the mosque lifted into the air when the waves came. Others say it’s because mosques are built with better materials and higher standards than other structures. 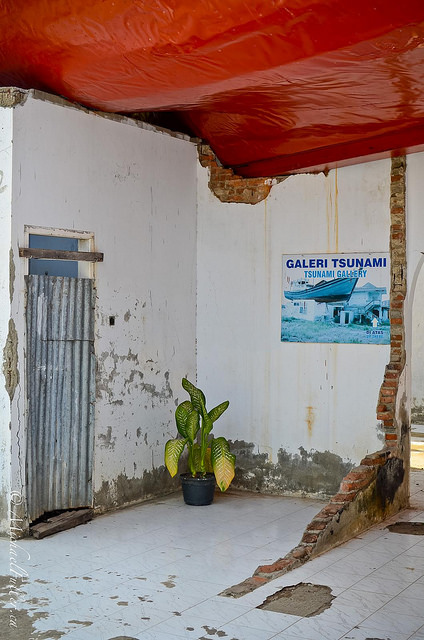 This house has a one-of-a-kind roof. The wall photo is a hint.

Places with hills fared much better, like the nearby island of Pulau Weh, the northernmost place in Indonesia (and where I nearly high-fived the Indonesian President during our synchronous visits). My dive-shop owner, a big smily local named Mus (pronounced ‘Moose’) recalled the scene:

“All the water around the island disappeared. People ran out to collect fish and play in the strange landscape. They ignored my warnings. Until they heard the sound. Like thunder, and getting louder.”

They saw the wave after they heard it, approaching on the horizon.

“Everybody ran up into the hills. There we watched trees and power poles snap like matchsticks.”

The residents of Pulau Weh got front row seats to one of nature’s most rare and powerful phenomenon. They suffered no deaths. But during my visit eleven years later, people all over Aceh were reflecting back on the tsunami devastation in a very unexpected way. IT’S HARD TO IMAGINE, but despite over 160,000 deaths people many people told me the tsunami was a blessing.“Without it, we’d probably still be fighting.”

You can be forgiven for not knowing much about the civil war in Aceh, because I hadn’t either. But for 20 years the Free Aceh Movement (or GAM, Gerakan Aceh Merdeka) fought for independence, touting a raft of reasons including their storied history: The Sultanate of Aceh was the largest power in the region for centuries; and in 1602 the Sultan was writing and receiving letters to Queen Elizabeth I.

Even the name for this, the world’s sixth largest island came thanks to the Sultan of Aceh. Via a sort of confusion: Though some knew this island as Sumatra (Sanskrit for “Island of Gold”) as early as 1017, it never caught on. But the name Sumatra became dominant again when confused with the Acehnese Sultan’s proclaimed dominion over ‘samudra’ (from Sanskrit ‘gathering together of waters’)

During the civil war, Aceh was heavy with military. Like most civil wars, the battlefield were people’s neighbourhoods, the casualties those unlucky. Both sides alternated terrible atrocities: One local in Lhoknga described the oil drums which would regularly wash up on the beach – always, with a body inside. The GAM would take suspected colluders out to sea, seal them alive inside a barrel, and cast them overboard.

Starvation or drowning: neither are pleasant ways to die.

The military for their part was no better: They even tortured children of suspected GAM fighters in hiding, their mothers forced to watch. One expat I met who stayed in Aceh during the civil war said he’d had gun barrels pressed into his head (dozens of times), been caught in shootout cross-fire, and “seen more dead bodies than anyone in the British military.” Through numerous death threats, he stayed. Why? “For the beauty of the place and the adventure of living here”, he told me.

After the tsunami, the GAM signed a ceasefire, for myriad reasons: The disaster had killed many fighters and the willpower of the survivors; billions of foreign aid dollars were pouring in creating actual employment opportunities; the national and international response convinced Acehnese that the world cared about them; and many perceived the waves to be a punishment from God – a possibility not quickly dismissed by people who pride themselves on being the most Islamic in Indonesia.

It’s a peace that’s lasted until now. But perhaps tenuously. Coins for Abbott – Aceh now and in the future

Some say the ceasefire was only signed to give the GAM time to re-arm. With strangling corruption on the tap of dwindling aid money, many feel that progress is grinding along too slowly. Ten years on from the civil war, the GAM have essentially transformed into a contractor-mafia who intimidate their slimy fingers into every government-funded pie. But their workmanship is so poor they have the anti-Midas touch – every project they touch turns to shit. Some ministers prefer not to even spend the earmarked money.

In a lively street-side Aceh cafe on a humid afternoon I debated politics with some locals. They were well informed, discussing one of Australian Prime Minister Abbott’s many ongoing debacles: this time, attempting to guilt-trip Indonesia about the planned execution of Australian heroin smugglers (the “Bali Nine”). Abbott had the audacity to play the “But-we-gave-you-tsunami-aid-money” card.

The locals wisely told me “Don’t mix aid with politics.”  They described the national fundraising campaign to reimburse Australia for that tsunami aid money. It’s called “Coins for Abbott” and I think it’s a particularly hilarious international F-you to our deservedly unpopular leader.

Those guys were good fun, and patient while my dictionary limped our conversation along, entering more serious territory. One man showed how he felt about the current Indonesian President by dragging his thumb across his neck. He wanted to kill him, and restart the civil war.

For now, such extreme views remain limited to entertaining foreigners in coffee-shops. And whatever the fate of Aceh, I hope the memories of the nightmarish decades preceding the tsunami aren’t soon forgotten. 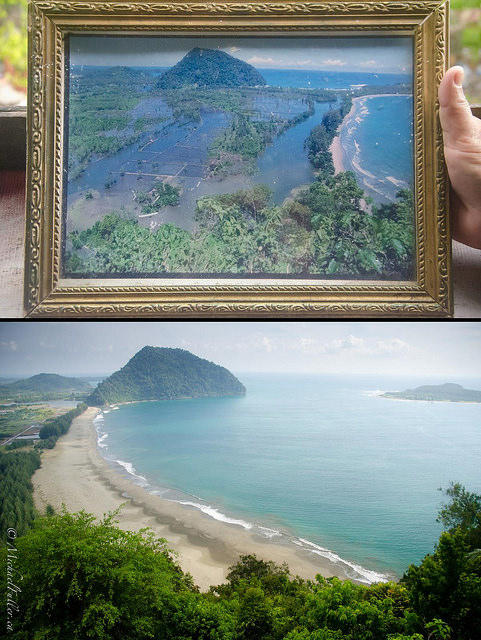 “Before and After”. Click the photo to read how I discovered this photograph.