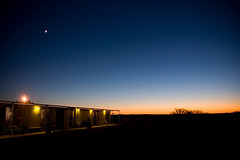 My buddy Dave Medilek, well known in Canada as ‘D-Med’ told me a story about his first day at his mine. They asked him if he had a nickname, and he told them “Sure, everyone back home calls me D-Med”.

The guy thought Dave was a virgin, and a nickname like Horse might help him get laid. The guy went around introducing Horse to everyone, but never answered where exactly his name came from.

The night before my first day of work, a group of ladies at my hotel waited 45 minutes for taxis which never came, and ended up walking to the club.

Taxis in Perth are notoriously bad, so I aimed to be extra early to the airport. My cabby arrived on time (whoa!), and turned out to be a Somalian New Zealander with a fantastic African-Kiwi accent. We discussed foreign policy and politics. Later, he ‘accidentally’ missed our turnoff and ran the bill up an extra $5. I have a knack for getting drivers like this no matter where I am. (see China updates for more on this)

So I rocked up bright-eyed to my office after the flight 600km into the outback north of Leinster and was introduced to my new coworkers. A few minutes later, ‘Tortoise’ showed me to the notice board on the wall where I found a full A4 sized portrait of myself (that I had sent to the office weeks earlier to help identify me in the airport.) On the portrait was written ‘Seal Pup’.

So now I have a nickname. Why ‘Seal Pup’? Yeah, I asked too. Apparently Canadians are famous for bashing seals. But they already had a “Seal Basher”.

I had forgotten how much joking and pranking goes on at mines, and Australia tops them all. Australians love to “take the piss” (which means “make fun”). Each mine I’ve worked at is more isolated than the previous one, which means each one has a tighter knit group of people. When you spend this much time this far away from everything, your coworkers need to become like family. When you work for 13 hours a day, 14 days straight, it can’t feel like ‘work’ or everyone would burn out.

After only a few days here I’m loving the camaraderie of this group. Smurf, Turtle, his brother Tortoise, Hatchie, Yarpi…. and plenty more. Slovaks, Brits, Zimbos, Afrikaaners, Canadians, Aussies, there’s a real international team and everyone works very well together — but not with geologists, naturally.

After my upcoming 6 month stint underground running equipment and fixing vent bags (I’ll be seconded to the contractor), I’ll be joining this eclectic team of laid-back and hilarious engineers for some technical experience, and I can’t wait. It’s amazing how young the mining work force in Australia is. For instance in my Canadian underground mine the average miner was 45+ years old, whereas here its low 30s.

Yesterday when a wallaby casually hopped in front of me on the path outside my room, I had one of those realization flashes: “My goodness – I’m in Australia!”. I love those moments.

For more photos check out my website (click the thumbnail above!) and select either the “Around Perth” or “Around the Mine” sets.

P.S. The subject refers to the two major orebodies of my mine, each with their own ramp access and engineering team. The ramps are called Ilias and Helene. Can you tell that the original President was Greek?