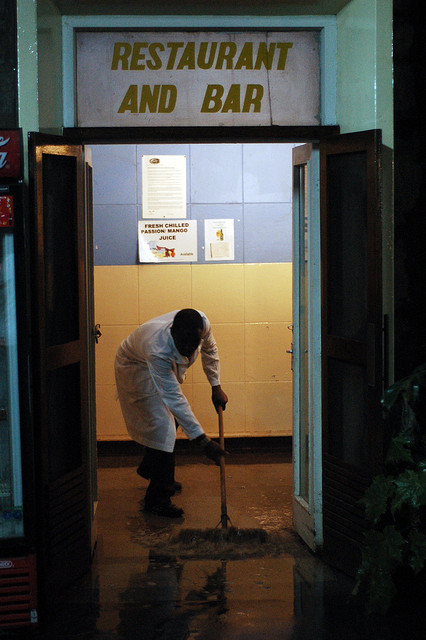 In Nairobi, rain respects neither roofs nor walls

Since my last update I’ve experienced almost a week in Kenya. I spent most of that in Nairobi and found the city surprisingly safe, and refreshingly modern. The people spoke English perfectly and the busy cosmopolitan city was bustling with smartly dressed professionals; suits, shiny shoes, and a mobile phone.

But the traffic was strikingly bad. Despite having public transit (no subway, only busses; this is Africa remember) the streets were choked with vehicles – most of which would never pass any first-world emissions test. It seems the tuktuk hasn’t been discovered here, which would help the traffic somewhat. During rush hour, I could walk the 3km to downtown from the hostel at least 20 minutes faster than any vehicle could make it. And it’s a 20 minute walk. Oddly, the traffic police direct things during daylight hours, and the traffic lights are ignored.

The taxis were overpriced ($5 for a 5 minute ride), so I frequented the busses and matatus (aka daladala, aka collectivo. They’re private minivan  busses, pouring smoke from the exhaust pipe, filthy and crammed with people).  I met a woman on the bus while traveling back to the hostel. She was smartly dressed, a receptionist, and her english was perfect. She suddenly told me “I live in Kibera. Have you heard of Kibera?”. My eyes widened.

Kibera is the largest slum in the world, and is located on the western edge of Nairobi. I told her “Yes of course I’ve heard of it. But.. how can you
live there? What’s your house like?”.

Wow, I have since learned that lots of gainfully employed people reside in the slum and they love their community.

On my last day in Nairobi I was wandering the National Archives and while searching for a balcony I found an industrial scene on the rooftop, and took a photo of it (see flickr). The security guard brought me down to the directors office, and I kindly went along. Thought it would be interesting, and curious what it was about. Of course, he suspected me of terrorism, because only terrorists take photos of non-touristy things. Later the security guard outside the enormous Kenyatta Conference Center stopped me while taking a wide photo of the enormous edifice. He asked what I was doing: “Taking a photo. I’m a tourist – it’s what we do”, I responded. He slowly and emphatically replied, “That’s a very bad idea.” Later I wanted to take a photo of some movie-theater hot-dogs, but of course that wasn’t allowed either.

Another strange thing about Kenya is that smoking is banned in public places. Outside. But inside bars and restaurants its fine. This is one of those laws that run contrary to logic (like Zambia making cars daytime-running lights illegal). Its best not to think about these things and just accept it: This is Africa. Logic appears out of the question.

One night in Nairobi I went out to a nice pub with live African music and a relaxed outdoor atmosphere. I knew that prostitutes were common in bars in Africa and wondered how you could tell them apart from just regular women being nice. After 20 minutes an unattractive local woman sat down beside me. She was even missing a tooth, and asked me my name. I told her, and she told me hers. “Lucky”.

Well, I didn’t have to wonder any longer. 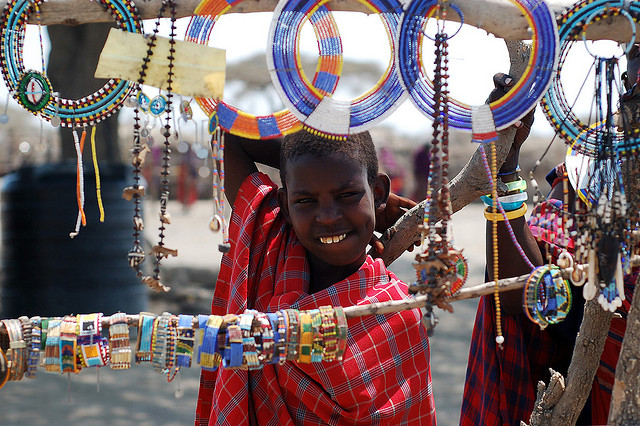 Everytime someone sees my Canadian flag they say “Canada! Vancouvertorontomontreal?” Always in that order. They tell me that most people they meet are from Vancouver. Perhaps Vancouverites are just more likely to speak to the locals here instead of ignoring them.

Its nearly everyday that I do a double-take and see something totally random that makes me laugh. Most people in East Africa buy second-hand clothes, and most of these clothes come from North America. So you encounter the most random and fun shirts. Example: a kid on the side of the train tracks in Tanzania with an old-school Canucks logo on his sweater. Or a begging man on the street wearing a Vancouver Sea Bus shirt. Or a guy in Dar es Salaam wearing the high school phys-ed uniform from the school that a fellow traveler attended in Washington DC.

Two of my favourite shirt sightings were a teenager with a shirt reading “#1 Grandpa”, and another time a young man with a shirt explaining “It’s not a bald spot, it’s a solar panel for my sex machine”.

And it extends to vehicles too. A matatu (remember, minivan bus) painted with Toronto Blue Jays colours and logos all over it. And Africans don’t even like baseball.

I also spent two days in Hell’s Gate National Park with a Dutch traveler. The park is one of the only you can bicycle and hike through, and the Rift Valley scenery was beautiful. I discovered that zebras and gazelles are terrified of humans on bicycles or foot but completely ignore vehicles. We even explored a naturally carved river gorge and had to rock climb over hot-springs. This area is very geologically active and the government generates electricity from geothermal energy. It reminded me of Iceland.

Last night I took a night train to Mombasa, on the Kenyan coast. In the morning we passed through Tsavo, famous for the man-eating Tsavo lions. Back when the railway was being built, over one hundred workers were eaten by lions. There’s even a movie about it which I’ve seen: The Ghost and the Darkness. Now I’m heading south to Zanzibar where I’ll spend the rest of my trip on the sunny archipelago rich in history and culture.

As usual check out my Flickr photos by clicking the thumbnail above!

» Africa, Experiences » How to Avoid Arrest, and Prostitutes (East Africa #3)