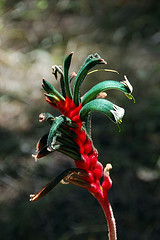 The Camp
When I arrived at the mining camp, the promised wireless internet connection did not reach my room. Damn. I went into the camp manager’s office and told the large woman behind the desk about my complete lack of wireless reception with the hopes of a room transfer.

“Oh, that’s because it’s windy today”, she explained confidently.
Staggered by her response, I couldn’t stop myself “Uhm, actually wireless operates using a frequency of light. Wind has no affect on it”.
She looked at me like I was exceedingly idiotic. “Well, just wait until the wind dies down. You’ll see. OK?”. The ‘OK’ wasn’t really a question, it was a closing remark, and she turned her back, to continue her vital work of managing the papers on her desk.

Today, the air was dead calm….
The wireless still didn’t work. What, you didn’t believe her did you?

Language Difficulties
I’ve needed to overcome numerous lexical hurdles here. For one thing, Australians use heaps of slang. I can’t believe how many words and phrases they’ve invented on this isolated island continent. Arvo (afternoon), bogan (redneck), CUB (cashed-up bogan, referring to the money-laden rednecks due to the mining boom), stubby (beer bottle), swallow’s fart (early morning), fair dinkum (being serious)…. more than you’ll ever need to know unless you plan to visit.

And of course there’s profanity to adjust to, being at a mine. One guy even explained “If you’re not being sworn at twice a day, it means nobody likes you”. But it’s even profane for a mine, and I’ll explain why: The first tenet is that you can say nearly anything and it won’t offend people, because Auzzies have thick skin. Then consider Auzzies love to make fun, or “take the piss [out of you]”. To top it off, being a mine many are naturally quite foul-mouthed. It’s all a perfect storm, really. I must refrain from adopting the local dialect or I’ll be in trouble when I’m not at the mine.

One more lexical quirk is the fact that I describe myself as “outdoorsy” and am accustomed to people (in Canada) knowing exactly what I mean. But in Perth (and the rest of Australia), everyone is ‘outdoorsy’. They all love going to the beach, walking the dog in the park, and the occasional jog. So I need a new term — how about ‘adventure outdoorsy’?

Advertising
Watching the morning news the other day I had to double check I hadn’t accidentally switched channels, when a really corny talkshow style infomercial began. Later I confirmed, to my horror, that their morning news features infomercials (with one of the anchors hosting the infomercial!). The regular anchor actually announces “Now we’re going over to Peter, who’s got Steve from MagiCook with him. He’s going to tell you about a revolutionary new way to save time in the kitchen, by preparing delicious and healthy meals in half the time!”
You really have to see it to believe it. And it doesn’t help that Peter has the charisma of wet cardboard, showing painfully forced enthusiasm for the products he’s showcasing (on the news!). It really calls into question the credibility of the news channel and anchors, whom we’re supposed to believe are unbiased and objective. They’re called anchors for a reason!

AirCon
I’ve moved into my new place, with two flatmates. I’m so happy to have found a place quickly, with funny (and clean!) roommies, with a gas stove and lots of counter space, in an awesome location and for a unbelievable price! But I must tell you about one thing that blew my mind: Pete was explaining the electricity bills, which sounded really low. I asked “What about in the summer when the aircon is being used”
“Oh, we don’t have aircon”, Pete replied. (Although it stays over 30˚C for weeks straight). “Alright, that’s no problem”, I told him. I can get a fan.
“No heater either”, he added. (In the winter the temperature is in single digits every night).
Good thing I brought my down booties. But seriously, I’ve never heard of a house without heating or aircon. But this just shows how perfect the climate is in Perth!

I’ve been putting up a few photos up from Perth and the mine. Check them out! Just click the thumbnail above!