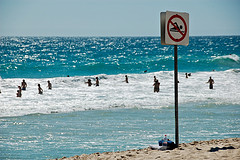 So I’m back at work for my first full two-week swing. The first week is nights, the second days. After my first couple nights of night shift I must say it’s been a tad easier than I thought to adjust, and there’s a few reasons why. They have made 12-hour day timing symmetrical, basically having breakfast and dinner open from 5 to 7 (for both AM and pm). Whilst underground, lunch times are about noon and midnight. Since it’s always dark underground you don’t worry that the sun is up or down; and when you begin and end your days its dusk and dawn or vice versa. So in theory the only real difference between day and night shift is which way you look to see the beautiful sunrise/set! Just don’t look for too long, or you’ll notice which way the sun is moving.

Wasteful Attitudes
We’re given cheap tupperware containers to pack our lunches in each day, and I wash mine out and reuse them for a few until they crack and break. A few people have commented “You are the only one that reuses those containers. Why bother when you don’t have to pay for them?”. Someone else told me that I’m likely to get food poisoning from reusing the containers. I asked him if he washes his dishes at home or just throws them out after every meal.

Last sleep (I can’t say last night because I work nightshift) there were power outages because our generators can’t quite keep up to the power demands. Without the aircon our small rooms (about nine square meters) heat up quickly to the high thirties, and I woke up drenched in sweat.

Last evening the camp manager was asking us if we would please make sure to turn off our aircon while we were away working our 12 hour shift. I was incredulous — why would she have to ask us something so obvious? It takes literally under a minute to cool down the room, so who would leave it on for 12 hours they’re not there?

The guys around me were equally shocked. Ah, but not for the same reason. “What?!” they exclaimed. “If we turn our aircons off, our rooms are going to be hot when we get back each day!”

Posi-bolt
As part of my training, and the main reason I came to Auz for work, is for practical hands on experience with the underground mining contractor to whom I’ve been seconded for six months. During my first week, the safety guy handed me the utility belt and I cinched it up as tight as it would go. And it still fell down over my waist. Now, consider the safety guy is referred to as “Big Ben”; he’s 6’4″ tall and about 250 lbs. When I asked for a smaller belt he said, “You’re going to have to fatten up, young fella. It’s the smallest we’ve got.” Big Ben now refers to me as “posi-bolt” because he claims I resemble the 220 cm long, 3 cm diameter steel bolts we use underground.

Netball!?
So I witnessed “netball” being played on the UWA campus the other day. What’s that, you ask? Well, I’ll tell you:

First, start with the thrilling sport of basketball. (Can you taste the sarcasm?).

Then remove the dribbling — that takes too much skill and precision.

Finally, remove the backboards and stand the nets on a vertical post, eliminating those boring slam-dunks.

There you have it! Netball! The dullest sport you’ve never heard of!

Mick / Mike
When I began with the contractor, a few people called me ‘Mick’. I casually corrected them, “It’s Mike, actually.” But I was scratching my head about why this kept coming up; nobody had ever called me Mick before in my life.
But then after correcting my next-door neighbour in the camp, he corrected me! “No Mick, it’s Mick. You’re in ‘straya now. Michael is Mick, not Mike. Get used to it.”

And now this crazy fad is catching on. It wouldn’t be so bad if there wasn’t a ‘Nick’ working on my crew. I’ll have to just plant the seed for the name “Fuller” with a few people, and it should spread like bushfire on an Australian summer’s day.

I’ve put a few photos up from my week off in Perth. Working a 2×1 schedule, you learn to cherish every moment in Perth. But it’s not hard when there’s 100km of beach, a good mate of mine I met in Zambia lives in Perth and owns a boat, and it’s sunny everyday!