Models for the World, and Soft Rock Ballads (Myanmar, Update #5) 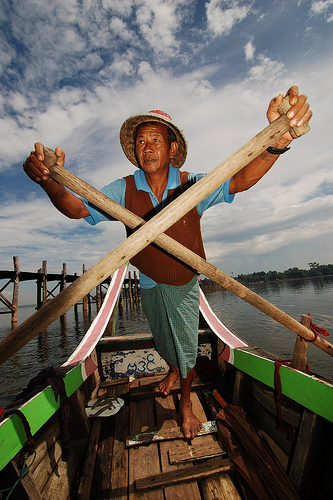 In Burma, new cars are as rare as free-speech. In Mawlawmyine (formerly Moulmein), they still use awesome old Chevrolet trucks from WW2.  Besides a few Land Rovers driven by the Generals or the politically well-connected, cars are from the 80s or earlier. And most have right-hand driver setup. This wouldn’t be so strange, except that somehow since British colonisation, Myanmar has managed to switch to driving on the right side of the road. This makes even the mundane task of getting on a bus exciting; since you’re stepping into traffic. And even better, it adds a new dimension to overtaking other vehicles; since the driver can’t see oncoming traffic until his entire vehicle, and all of its nervous passengers, are looking straight at it.

Myanmar people are avid carpoolers. This makes greenies like me smile (if I don’t see the blue smoke billowing from the tailpipe). We’ve traveled in a regular pickup truck carrying 30 people, plus luggage.  A local joked that, “from far away you cannot see any pickup. Only people, coming towards you.”

The Path to Nirvana

My last day wandering alone in Mandalay I had a random string of really nice encounters. Outside a Buddhist temple a kind woman vending food served me a delicious meal of rice, soya and green beans, and tomato onion prawn curry. When I asked the price she replied “present” and refused payment. Minutes later I was looking for a pickup ride home and stopped to help a man unload the roof of a bus. It wasn’t going where I needed but the driver insisted I board, and a woman told me that the driver would make a detour to drop me off. He refused my fare, too!  When I got off the bus I went to buy some street pancakes from an Indian lady who sells them in a tiny, lively alley neighbourhood we found by accident the day before.  The pancake lady’s only English speaking friend, amid a chorus of giggles from the neighbourhood women and children, proposed to me!  Afterwards, I walked past some friendly teenage girls outside a clothing store, and they waved me in to chat (with more giggling). One girl opened a handwritten lyric book, and soon we were all singing “My Heart Will Go On”. Later when the girls called me beautiful I immediately protested, “No, not beautiful. I’m ‘handsome’.”  I thought I was having a lucky day, or people were just on a karma spree, but that day marked a turning point from the standard developing world kindness to a whole new level that puts Burma in the company of Nepal, Laos, and Iran (places where I know or have heard the people are outrageously kind and generous.)

The Quest for Nyi Nyi

I get really excited about random challenges when traveling, like trying to find a backpack repairman in Amsterdam, or a hidden mountain temple in Korea, or a specific conman in Zambia. (I only succeeded in one of those challenges, by the way). My last night in Mandalay I met a Polish girl who was trying to reach her young tour guide from Inle Lake, which was my next destination. She said everybody pretends not to know this guy “Nyi Nyi” because he’s a freelance undermining tour agencies, so she didn’t think I’d find him. So I told her I surely would, and she wrote a letter for me to deliver. (I didn’t steam it open but am almost certain it was a love note). The town was so small I had great fun bouncing around the social networks. After asking a few people, the first person who knew Nyi Nyi said, “Oh yes! I know her. She got married and moved away 4 years ago.” I kept looking.

While chatting with a freelance guide about the fine art of eating betelnut, I learnt that Nyi Nyi’s father-in-law sells sandals in the market. I went to check it out, and found that there were more than a few old men selling sandals in the market. The friendliest of all them called out to me and after chatting for 5 minutes I was feeling lucky, and asked if he knew Nyi Nyi. “Why yes. This is his wife,” he said pointing to his daughter. Jackpot!  We arranged to meet at their house for dinner that evening.  Funnily enough, later that day I befriended an interesting Brazilian whom I spent a lot of time with over the next few days. This Brazilian told me he had just met Nyi Nyi on the street, as Nyi Nyi was looking for me. Small town!

We were invited to so many locals’ homes for tea or food, always refusing payment. I spent hours in Phyu Phyu’s ‘bamboo hut’ sitting on the floor with her mother and sisters, playing with the kids (one of whom I’m now named after), drinking tea, teaching English, learning Burmese, and watching the women kick out their rambling, incomprehensible, drunken father when he got too loud or began to smoke. He actually hadn’t lived there since they threw him out 5 years earlier, but only visits for meals, and lives with his drinking buddies down the road.  Burmese men love their whisky.

And I love that town. In the afternoon people would start playing Chinlon, an incredible sport like volleyball, but only feet and heads can contact the ball, which is made of rattan. The leaping bicycle-kick ball spikes over the net were spectacular to watch. At night guys would sit out on the street singing and playing guitar beautifully, from their stool, doorway, or parked motorbike.  It was a shame I had to leave, because only two weeks later was the famous Fire Balloon festival I only saw video of: Unmanned hot air balloons loaded with fireworks — fuses burning — take off from the center of a crowd of thousands. The balloons don’t usually make it up very high, and sometimes are still on the ground, when they start firing thousands of colourful fireballs in every direction, often directly into the half applauding, half panicking crowd. It’s a pyromaniac’s dream!

Sometime I try to distill a country into the most common stimuli experienced by each of my senses during a trip. Here goes:

Sight: Thanakaw (facial cream/sunblock worn by all women) and longji (like a sarong, worn by everyone) decorating the most beautiful people in the world. If height didn’t matter, a fifth of the young women here could be models. They are stunning.

Sound: Clipping speakers blaring deafening music, (because it keeps the bad ‘nat’, or spirits, away). And what they play on every bus ride, which seems like the only genre of music: nauseating, repetitive soft-rock ballads with low-budget karaoke video accompaniment, often out of sync.

Taste: “Chinese Tea” which is drank by everyone, everywhere, for free. This is in contrast to Burmese tea, which isn’t free, and often comes from a “3-in-1 mix” packet (unfortunately).

Feeling: My butt, numb from sitting on long trips in a space designed for people that live in a country where five-feet is ‘tall’.

I’ve barely managed with all these internet restrictions, but have uploaded a few more photos to Flickr, with descriptions. The new ones are mostly watercolour. (You’ll see). Click the thumbnail above.