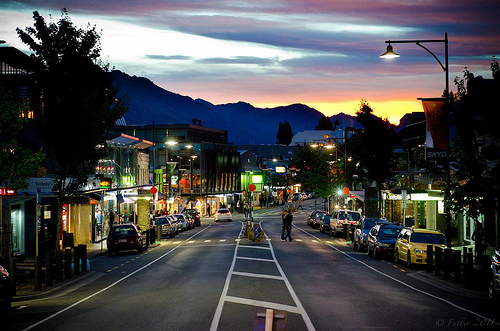 Christmas was quite unlike any other I’ve experienced. Until two years ago, when I spent it working nightshift as an underground miner in the summer heat of the central desert of Western Australia, I’d spent every Christmas in Toronto, in the snow, with my extended family. This year, I planned to hike the fifty kilometer length of NZ’s most popular “Great Walk”, the Abel Tasman coastal track. (There are nine “Great Walks” spread across the most beautiful areas of NZ, on well-built trails with campsites and huts.)

I began the afternoon on Christmas eve with a two-hour boat ride up the coast of the park, passing countless sea-life, pleasant cliffs, hidden coves, and orange crescent-shaped beaches stretching hundreds of meters. Our ride began a few minutes late, because a reserved family showed up late.

What’s worse, the guide had just finished packing our backpacks in the hold. He went to see what luggage the family had with them, and returned with a defeated expression, shaking his head, and muttering to us, “We have to unpack the hold. They’ve brought the kitchen sink.”

They were going to a luxury hotel in the park with everything provided for them, yet they each brought three-times what anyone else brought, in huge wheelie suitcases (*shudder*) and grocery bags of food. I guessed correctly that they were Australian, because many Aussies like their “outdoor experiences” without any of the discomforts of the outdoors.

But how about the hike? The best part was that the tides completely dictate your timing, as some places are impassable except at low-tide where you must hike through water. If you’re impatient or slow, you’ll have to (try) to swim, because high-tide is five meters above low-tide.

I was a little impatient (I had to cover 25 km in an afternoon), and waded waist-deep through an estuary for nearly a kilometer. It’s harder than I expected and took almost an hour, especially since I had to backtrack and meander to find the shallowest path.

While I waited with some Czech girls for the tide to drop, some even less patient Germans crossed towards our side: Neck-deep, carrying their packs over their heads, and completely nude. They didn’t see us waiting, so when the girls and I called out “Wooo weee!” at the naked Germans, they dived into the bushes ashamedly, and got changed.

That night I arrived before sunset at the hut and found friends with whom to share the huge Christmas cake I brought. My new friends were all northern hemisphereans: 3 swiss from a small village; 1 hyper German girl who said ‘like’ about, like, a million times; and 2 medical students from Slovenia. We all lamented the normality of snow and family, but were glad to be on a remote and beautiful beach at sunset, and full of Christmas cheer.

This hike couldn’t have been more different than my North Island dayhike at the Tongariro Alpine Crossing, where sideways-rain lashed at our faces and the 60 kmh winds nearly blew us off the mountain. We couldn’t see the stunning peaks all around us, including Mt Ngaurahoe — which you may know as Mt Doom from Lord of the Rings — but we met one local on the trail that tried to help us out. “Right there is Mt Tongariro,” he said, drawing the mountain with his fingers. “And over there is Mt Ngaurahoe,” he continued. “They’re really beautiful, believe me.”

We weren’t sure whether to thank him or punch him. So we soggily hiked on, boots-a-squishing.

Our Rent-a-Dent car wound through vertical rock faces that towered to the clouds, covered in waterfalls too numerous to even name, and we pressed our noses against the glass in awe. We were in the promised land of NZ: The spectacular Fiordland National Park, and unsurprisingly, the weather was awful.

This area sees 7,200 millimeters of rain each year. Consider that the ‘wet coast’ city Vancouver gets a mere misting with only 1500mm to put things in perspective. We had planned a lesser-known, lesser-marked dayhike, but the weather wasn’t letting up.

My friends Al and Kat decided they’d do a few hours of the hike anyways, and I would stay back and take some photos in the valley. Just outside the hut where we parked, a couple fit outdoorsy folks climbed out of their Landcruiser and greeted us. The bearded guy asked where we were going.

“We’re going to hike up to the saddle,” Al replied.

The bearded guy looked at my friends Al and Kat in their goretex pants and hiking boots. Then at me through the rain in my soggy pants and flip-flops.

We had a laugh afterwards at this bearded man’s revelation. But more importantly, at who he was — Allan recognized him immediately but never said anything until afterwards.

He was Derek Thatcher, whom the Earth Sea Sky outdoor clothing company describes as a “freak of nature” having “climbed more difficult rock and boulder routes in New Zealand than everyone else combined.”

Al was already planning how in his next encounter with Derek he could dissociate himself from me and my flip-flop hiking ways.

“Hello Cookie Monsters!”, I called out to the teenaged staff loitering in the store, waiting to close up for the day. This was “Cookie Time”, one of the few stores in the country dedicated solely to selling this hugely popular brand of cookies and cookie-like snacks.

Their mascot, the “Cookie Muncher” is a crazed red-haired rip-off of Cookie Monster. I found my bag of cookies (half price for broken ones!), and another pack of dense granola bars — except down here they’re called muesli bars. I asked the young staff girl if these granola bars were any good.

“I love them!” she said, surprisingly enthusiastic. “My parents were eating these the night they conceived me. So yes, they’re really good.”

What a saleswoman. I bought ten.

So if you hadn’t heard, spoken to me recently, or possess psychic powers—I’m back in Western Australia. And I’m not going anywhere for a little while. But I’ve got forests of memories to walk through. I’ll fondly miss:

Sunsets over mountains, valleys, cities, seas, glaciers, or all of the above; Incessant sandflies and their wonderfully addictive itch; Fantail birds maneuvering beautifully to hunt insects; Hugging trees older than Jesus; Watching Al’s tent fall apart, a little bit more each day; Paua sausages and Monteith’s Summer Ale; Al’s impersonations of Kiwi farmers (“Rugbaaay”); and trying to run over possums, rabbits and stouts (it’s the environmentally responsible thing to do!).

For the last batch of photos from Middle Earth, follow these simple instructions: