Islands on the Edge of the World (Canada #4, Haida Gwaii #1) 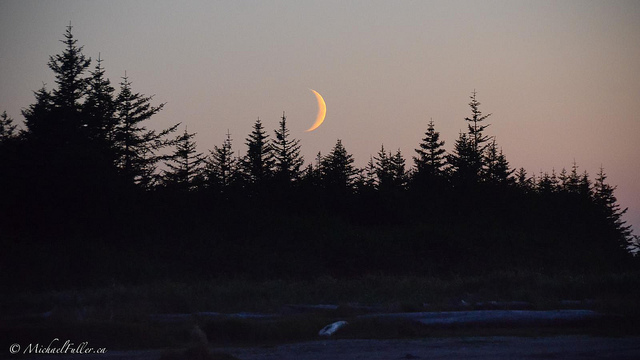 Good things come to those who wait, but memories do fade. Have you forgotten that I even went to Haida Gwaii? Or wondering who the devil this Michael Fuller is and why he keeps emailing you? Well you can refresh your memory in the final section of my last update here.

“Does this boat have a name?”, I yelled to the little blonde woman driving our zodiac. She could barely hear me over the roar of twin-200 horsepower Yamaha engines. “Yes. It’s called ‘Yamaha’!” she yelled back, “Pretty creative, eh?”.

We were being delivered to the remote Gwaii Haanas Reserve, which is all at once a national park, a marine conservation area, a Haida Heritage site—and somewhere I’ve dreamt of visiting since childhood. David Suzuki’s The Nature of Things somehow got this wild, special, and rather enormous place firmly lodged in my cranium. The enormous engines made this boat feel like a rocketship. And the enormous wilderness made this place feel like another planet. One without humans. The wind bit through our overcoats for over an hour as we pushed south through narrow channels, deeper into the wilderness where Barry and I would be left for five days of sea kayaking—something neither of us had done before.

When Barry originally suggested solo sea-kayaking in this remote area (because guided tours were outrageously expensive), I thought it was a terrible idea. We’d spent little time in kayaks before, and never at sea. Gwaii Haanas—known for its rough seas, strong tides, and remoteness—seemed like a dumb, albeit beautiful, place to teach yourself this kind of thing. I asked my experienced sea kayaking friend Bryn for advice. He basically said “you’ll be fine, unless you’re total idiots”. Being only partial idiots, we were convinced. 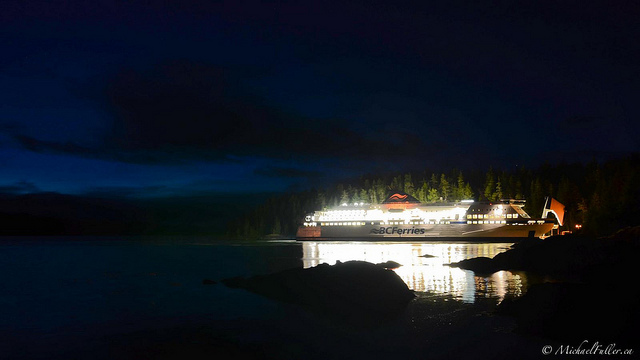 I arrived a bit early for my ferry, so I slept in the woods nearby and hoped that the cougars weren’t hungry 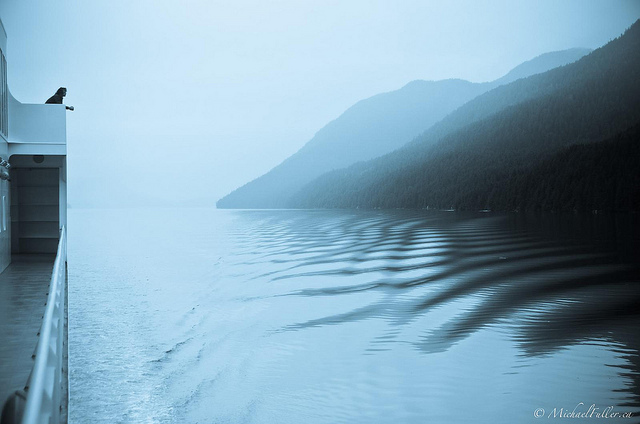 Our intended route would be safe, staying around one relatively protected area. On the zodiac trip down, we met two awesome journalist/guides who had over 30 years kayaking experience between them, including much in Gwaii Haanas. They were there to cover the story of the totem pole raising in the park, which would be the first in over 120 years. They encouraged us to get to the totem pole raising. But it was nowhere near our intended route. We explained our utter lack of ability, quietly, because we thought the outfitters would turn us right around if they knew that most of our expertise on sea kayaking had come from YouTube.

These guides emphasised that this ceremony was big deal. Nothing like it had happened in their 20 years of visiting. One of them was writing about this for the New York Times. (to which Barry replied, “Is that a local paper?”). They took out our map and showed us a five-day route that’d be totally doable. Then they marked all the most beautiful places along our route that they’ve camped in 20 years of guiding.  They gave us a heap of valuable tips (summarised on my blog). Our favourite being “it’s bad luck to paddle without beer,” before handing us a six-pack. Yes. These guys are absolute legends. 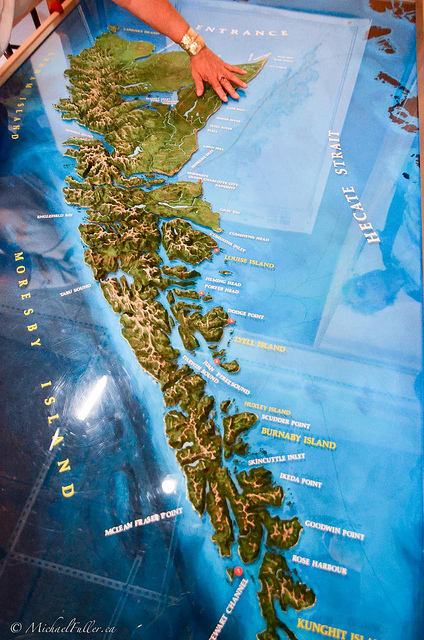 Diorama-rama! Welcome to Haida Gwaii. We began our kayaking at Skincuttle Inlet.

Our zodiac rocket was slowing. We’d reached our destination in the southern end of the park. We weren’t far from one of the only settlements, one off-limits to visitors: The Swan Bay Rediscovery Camp. This inspiring initiative was started over 30 years ago by two crazy visionaries who wanted to “get kids back in touch with the land and culture and stuff”. The camp goals were simple and all encompassing:

To discover the world within oneself, the cultural worlds between people, and the wonders of the natural world around us.

The kids in this year’s camp group were actually departing in giant war canoes, at that very moment, from the northern end of the park. They were headed to the totem pole raising. Would we make it there to join them? Just before our outfitters motored away from us, we called out to them.

“Change our pickup location! We’re going to the totem pole raising”. We were committed.

Our guide friends rapidly packed their boats as we stood around, half dazed at what we’d just agreed to, half eating, and half trying to pay attention because we’d never packed a sea kayak before. (Yeah I know that’s 3 halves, but I said we were dazed). Within minutes they were in the water and disappeared. We stood there on the rocky beach, in nervous silence, as a fine drizzle fell upon the unusually glassy ocean. 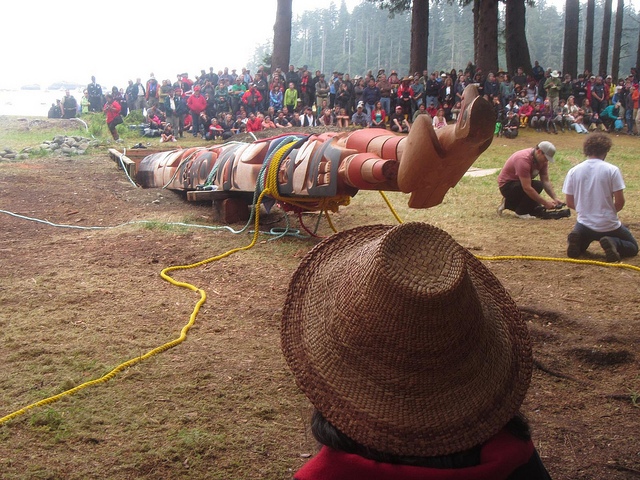 We made it, with a few others (mostly motor-assisted cheaters). We all helped on the ropes to raise the pole.

The first three days were beautifully calm and even periodically sunny. We started to get accustomed to our new lives at sea. We had no reason to doubt our decision to change our route was unwise, until the end of the third day neared. Before us was the longest crossing of our trip (7km), coinciding beautifully with the worst waves and fog we’d seen yet. As we pointed our kayaks to a landmass that routinely disappeared into said fog, we decided this would be where we graduate to Real Sea Kayakers. Halfway across, with occasional waves crashing over our bows into our chests, threatening to capsize us, and both our origin and destination periodically disappearing into fog, Barry must have recalled the chain of events that got us into this situation. Specifically Bryn’s advice to me a month earlier that we’d be fine. Barry yelled to me over the waves,  “Do you ever think that Bryn was trying to get rid of you?” 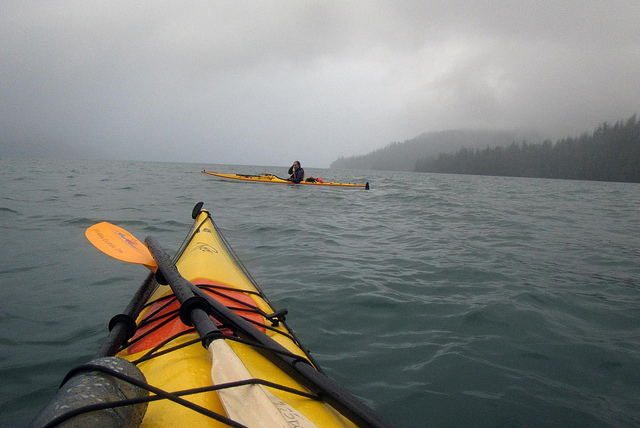 Fog makes for some interesting navigation

So I wasn’t going to even try to convey how beautiful it is in Gwaii Haanas, because words and photos pale. But I thought: Why not give it a try! Let me know how I go: The place is absolutely wild and pristine. Seals would routinely follow us around, and we lost count of the bald eagles swooping and fishing around us. Every time we landed our kayaks and walked into a new forest we’d be dumbstruck, like someone slapped us with a sockeye. The forests were untidy: messes of nurse logs, moss trampolines, and monstrous trees strewn about like dropped matchsticks. The bohemoths still standing had branches which would themselves make for impressive trees.

Have you ever visited a majestic patch of monumental old growth protected for tourists? (there are such places in Vancouver Island, New Zealand, and Australia). Well I had the realisation in Gwaii Haanas that all the ancient stands of protected trees I’d seen before were just the barest glimpses of the old world, spared from logging in order to create tree zoos. And as wonderful as zoos are, ask anyone who’s been on safari, or scuba diving, how zoos compare. And without diminishing the beauty of those old growth patches we’ve all visited, this was my first time seeing old growth in the wild.  And it blew my mind. 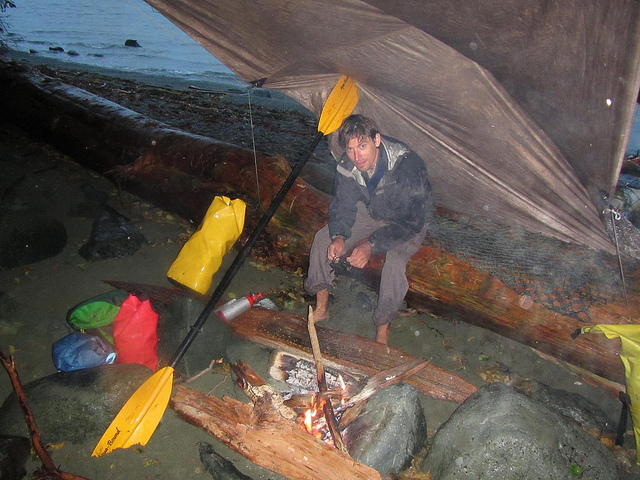 Another gorgeous summer evening at the beach in Gwaii Haanas.

At the end of our kayaking trip, we had lots of time to chat with our skipper as we loaded kayaks. He mentioned he was divorced.

I could sense a story unfolding.

“It was another guy in the neighbourhood—our trailer park. Hey! I just saw it as a cheap place to live, but she saw it as a great lifestyle. It should have been a warning for me that our town’s large ‘Welcome to Canal Flats’ sign had had its ‘C’ crossed out”

At least he was laughing about it now. I changed the subject, asking him the name of this zodiac, like I had asked our skipper on the way down.”Honda”, he said, as I turned to look at the engines.

Before I could ask, he continued. “This one had Honda engines… back when we named it Honda. But now it has Yamaha engines. So it can get a bit confusing sometimes.” I detected some flaws in their naming convention. He went on to tell me the other zodiacs’ names:”Nonda”. Because it’s not a Honda: it also had Yamaha engines.”Rhonda”. Because it rhymed with Honda. I think it was the only one that actually had Honda engines.

And there was one more boat.”The owner was silly enough to let our nerdy crew name it. It’s called: ‘Enterprise'” 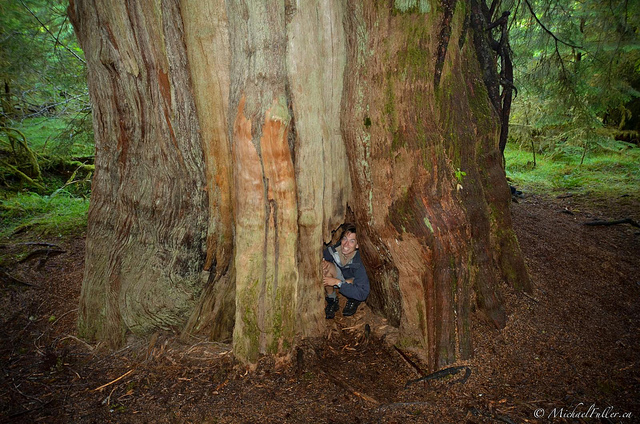 Did I mention the trees were slightly larger than usual

Many people on Haida Gwaii still hunt and gather traditional foods and medicines from the land and sea. But by 1985 the Haida could see their natural capital eroding from unchecked and rapidly growing rates of resource extraction. They foresaw this would, within their own lifetimes, destroy their way of life. The Haida Council designated an enormous and still pristine area, roughly one third of their entire archipelago, to be a heritage site. They drew a line in the sand, figuratively. But they drew a line on a map, literally. Consider that Canada had never bought the islands from the Haida, conquered the Haida in war, or even asked the Haida to join their country. So as far as the Haida were concerned, their islands weren’t even necessarily part of Canada.

So the Haida Council, as it has for thousands of years, sets the Haida law. As you can expect, Canada didn’t recognise this, and continued issuing logging permits. But the Haida Nation had spoken. Every time a logging permit was granted below that line, the Haida mobilised. They camped for months on the blockade, sustained by the entire community at home. Dozens of people were arrested, including many of the culture’s revered elders. Young people protesting is nothing new, but fragile seniors? It became national news. It took three years of protests, legal battles in BC, wins in the federal supreme court, and all sorts of other creative, persistent, and clever thorn-jabbing (like visiting the UN Law of the Sea convention to contest Canada’s territorial claims); but the government established a logging moratorium. And six years later, the entire area became a National Park Reserve, with a boundary where the founders of the movement had drawn their line, eight years earlier. 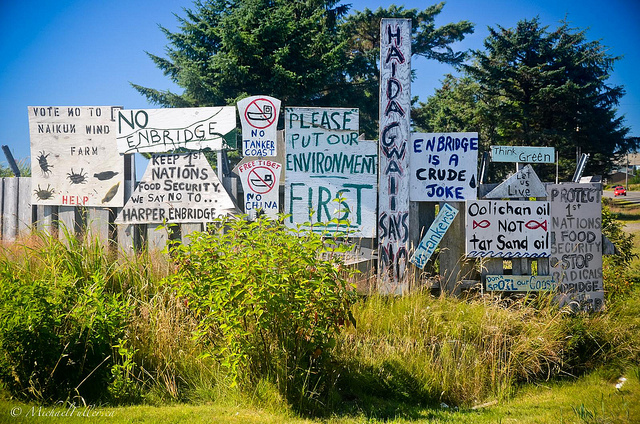 The Haida sure love a fight, and nowadays it’s against the proposed Northern Gateway pipeline

Gwaii Haanas is the only park in Canada co-managed by the local First Nations; and perhaps the only in the world protected from mountaintop to ocean floor. The Haida govern using the concept of yah’guudang — knowing their place in the web of life, how the fate of their culture runs parallel with the fate of the ocean, sky, and forest. At the most significant sites, where ancient totem poles still stand, Haida Watchmen live year-round to serve as guardians, continue the 10,000 year history of their culture here, and serve as cultural ambassadors to visitors. And if the Haida Nation achieves its constitutional goals of establishing “land and resource policies consistent with Nature’s ability to produce”, we can expect it will remain just as magical for at least another 10,000 years.

But don’t wait that long to visit. 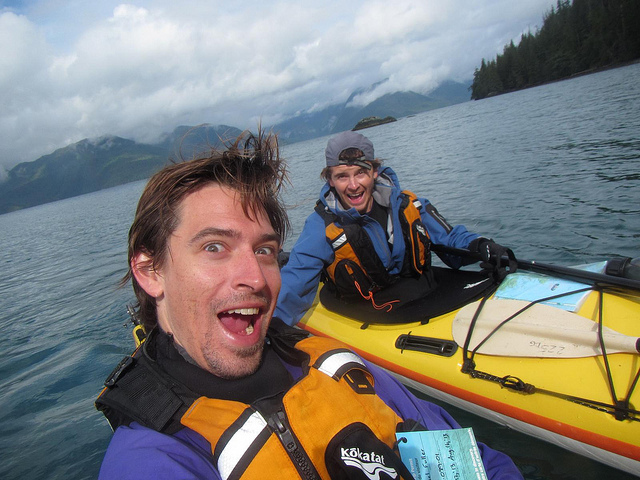 Floating happiness. With a pinch of madness.

p.s. In addition to being one helluva nice guy, our journalist friend Bruce Kirkby happens to be a helluva good writer! Check out one of his short kayaking stories.

» Americas, Experiences » Islands on the Edge of the World (Canada #4, Haida Gwaii #1)

2 Responses to Islands on the Edge of the World (Canada #4, Haida Gwaii #1)