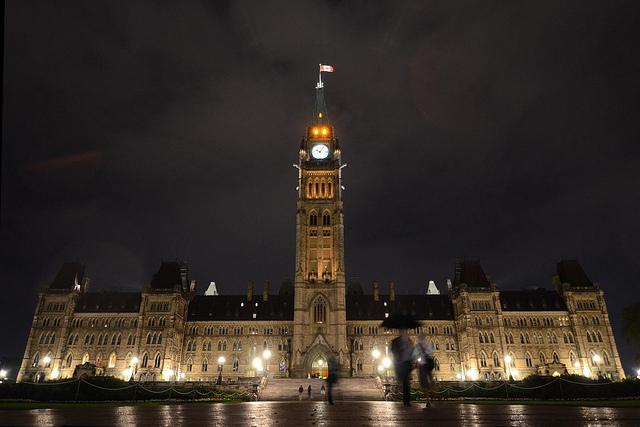 Weddings. They seem to be quite the trend these days. Though I’m not one for fads, I figured it was a good idea that I attend my brother’s wedding. After all, it was one of the major reasons for this crazy and wonderful trip to Canada. Plus, he was holding it in Ottawa, and I’d never been before. Better yet, it would be in the spectacular Grand Hall of the Museum of Civilisation, a hanger-sized room with a magnificent panoramic view of the Ottawa river and historic waterfront. If that wasn’t enough, there would be six tables of dessert. It was definitely a strong case for my attendance. And it would be difficult to be the Best Man over Skype.

I won’t re-hash the wedding details, but it was great in all the ways weddings ought to be: I spent lots of time with my family (new and old), my little flower-girl nieces were adorable, I didn’t lose the rings, Jon stepped on a glass, I rocked a 1980’s brown three-piece suit, the groom kissed the bride, and later we held them up on chairs without dropping them, funny speeches, drunk relatives, etc. I’m really glad that I didn’t miss out.

The bachelor party got pretty wild.

But more on the wedding venue (you’ll see where I’m going with this): the Grand Hall was architecturally designed in a canoe shape, inspired by the west coast aboriginal story of the Raven’s magic canoe—which could shrink to the size of a pine needle, or expand to hold the entire universe. (The architects couldn’t quite figure out how to do the same with their room). The Hall exhibits west coast aboriginal culture, architecture, history, myth, and art. The room featured six different traditional longhouses, and many intricately carved totem poles.  And towering beside us for the ceremony was the famous Haida artist Bill Reid’s masterpiece The Spirit of Haida Gwaii; his largest and most complex sculpture. It even was depicted on our $20 bills, until the latest revision. The Haida proudly called those older ones “Haida-bucks”. (I’m sure competition was rigorous for the new $20 design, as it’s now decorated with a featureless concrete block). The late carver’s massive, magnificent canoe sculpture is overflowing with paddlers: humans, animals, Raven and Eagle (the two clans of the Haida, and very important creatures in Haida stories). Commenting on where the canoe was heading, Bill Reid once said:

There is certainly no lack of activity in our little boat, but is there any purpose? Is the tall figure who may or may not be the Spirit of Haida Gwaii leading us—for we are all in the same boat—to a sheltered beach beyond the rim of the world as he seems to be? Or is he lost in a dream of his own dreaming? The boat moves on, forever anchored in the same place.

It was thus fitting that just days later, I’d also be on a boat. But I knew where mine was heading: to the edge of the world. To Haida Gwaii. 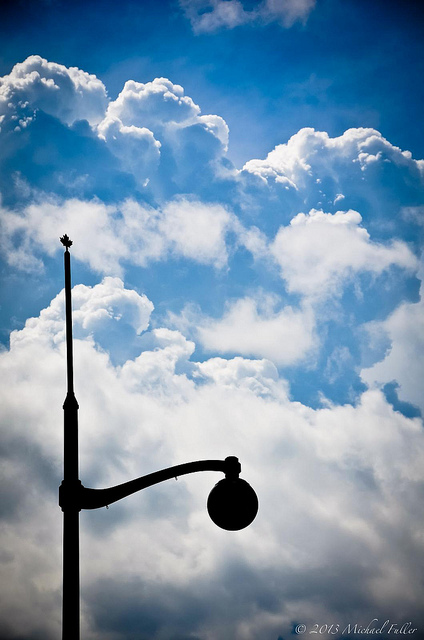 A brief lesson in history and geography


Way up in the north west corner of coastal British Columbia—right before the area that, it’s my understanding, the Alaskans stole for their frying pans—you could find yourself staring west into the setting sun. Assuming it’s not raining. But it usually is up there. Over the horizon lies a distinctly isolated archipelago of 150 islands formerly known as the Queen Charlottes. The modern name is Haida Gwaii, meaning “islands of the people”. This region was literally the last place added to our world maps, in 1787. By then, even Australia was fairly well mapped. Here in geographic isolation over many thousands of years, the Haida developed their own distinct language and culture, over a hundred villages, and even established trade routes as far south as Vancouver. That’s a long paddle.

Hecate Strait has separated this area from Canada for 15’000 years. This isolation spared it the full brunt of the ice age, preserving dozens of plants and animals now found nowhere else. The aptly named Strait (the goddess Hecate being associated with crossroads, entranceways, and sorcery) is prone to sudden, violent weather; and owing to the shallowness, enormous waves. This archipelago is potentially the windiest place in Canada, with average speeds in the winter of 35-40 knots. (Locals always carry a chain-saw in their car so they can clear the daily blow-down across their roads). Despite the fierce weather, the ancient Haida’s warrior culture and advanced war canoes, carved from enormous cedars, allowed them to make distant war raids against mainland tribes—where they plundered like Vikings, taking women and slaves. John Vaillant writes in The Golden Spruce (recommended to anyone interested in early exploration, aboriginal culture, or beautifully-written adventure stories):

Traveling in these giant cedar canoes, the Haida would regularly paddle their home into, and out of, existence. With each collective paddle stroke they would have seen their islands sinking steadily into the sea while distant snow-covered peaks scrolled up before them like a new planet. Few people alive today have any notion of how it might feel to pull worlds up from beyond the horizon by faith and muscle alone.

Haida Gwaii sits precariously on the famed Ring of Fire, a highly active tectonic boundary around the Pacific ocean. Haida Gwaii has been the epicentre of Canada’s largest recorded earthquake. And the second largest. And the third. Just a few kilometres to the west of Haida Gwaii, the continental shelf ends, and the ocean floor plunges precipitously from 10 to over 1000 meters depth. These islands are literally on the edge. Interesting then, that the ancient name for this place is “Xhaaidlagha Gwaayaai”, meaning “islands at the boundary of the world”. Though ‘world’ here refers to the sea and sky, not the continental shelf, or the planet. Regardless, the ancients certainly named the place well. 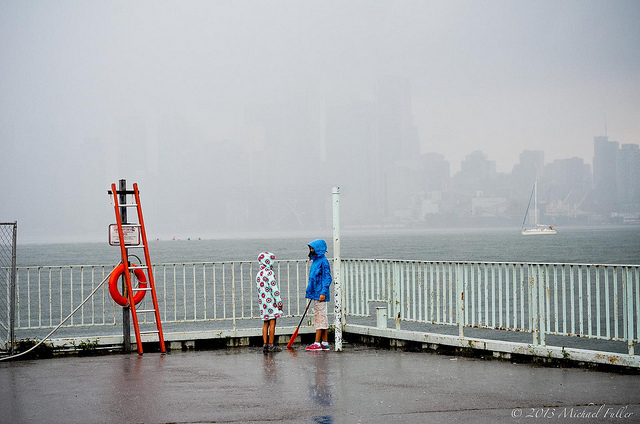 Not exactly Hecate Strait, but these girls braved the storm on Toronto Island. We cowered under a gazebo.

A thousand mile journey begins with…

a single step. In my case, that first step was: Don’t miss your ferry, because it only runs once every two days. I arrived at night, twelve hours before departure. The woman at the airport advised a good place to sleep near the ferry, but warned, “Watch out for bears and cougars. Especially cougars—the bears are positively friendly by comparison.” I had been warned about cougars before, just not the animal kind. But I knew how to be bear-safe, so I’d just do that, and hope that hanging food from trees doesn’t piss off cougars. BC Ferries had advised checking in two hours early—but surely, they meant cars, so I ignored them—and set my alarm accordingly, and went to sleep under the stars, beside the sea. I awoke less than an hour before departure, feeling anxious, having dreamed I missed the ferry. It sparked me into action, and I immediately packed up and headed to the terminal. Turns out they actually meant that two hour nonsense for people too, and I was unsympathetically informed I had arrived with only seven minutes to spare.

Sixteen hours and hundreds of beautiful kilometres up BC’s coast later, I still had another long ferry ride left. As with train rides, ferries are wonderful for unhurried conversation with interesting strangers, and solemnly gazing at the real world drift past. It was on this second boat that I had the good fortune to speak with a carver and musician of high esteem on Haida Gwaii. During the many dark decades when the Haida language, culture, music and ceremonies were illegal, they had actually lost knowledge of many of their songs and the instruments used, for both music and theatre. Songs are interesting in Haida culture because they have ownership, must never be sung without permission from that owner. Songs can be gifted to others, and new songs can sometimes come to people as gifts from individual animals met in the wilderness. This man was a prolific song writer, gifting them to the people, actively rebuilding and growing Haida culture through new songs and dances, and even carving new instruments. 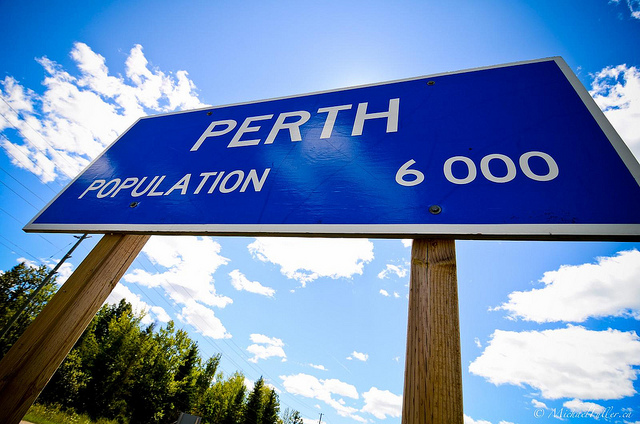 It remains to be seen which Perth is more exciting. But at least this one is walkable.

I also spoke at length with two elders from another distant First Nations community, one of whom was lovely teacher busily knitting the entire hour we spoke. (Later, she would actually gift me a handkerchief, the very thing she was knitting. What a sweet-heart.) She introduced me to her husband, an 87 year-old hereditary chief from Bella Bella. He told me many stories from his life, including years ago when he reluctantly agreed, after much persistence by his town’s church, to attend the annual general meeting of the United Church. Throughout this meeting he kept hearing mention of how the missionaries had ‘brought God’ to his people. Finally he asked to speak, and was handed the microphone: ” God was already there before your people arrived. God was everywhere, all around us. You didn’t bring us God. You only brought us hell ! ”

Then he turned, grinning, “For some reason, I’ve never been invited back…”

I had read some history about Haida Gwaii, and I had already met some amazing people. I was starting to feel the magic of the place, and it was only just appearing on the horizon. And over the next two weeks, there would be more magic than you could shake a wand at.

–Mike
p.s. For more of, or the latest, photos and mini-stories, visit www.michaelfuller.ca 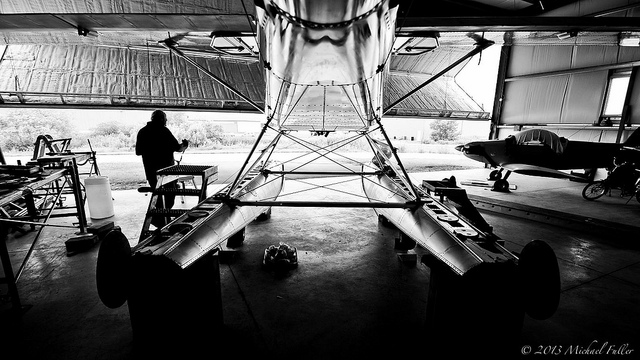 After commandeering our ping-pong room twenty years ago, my father has finally finished building his airplane.