For those of you joining programming already in progress, this is one of my weblog entries. The purpose is to entertain, teach, update, share photos, and maintain lines of communication from across the earth.

All That Glitters is Not Gold 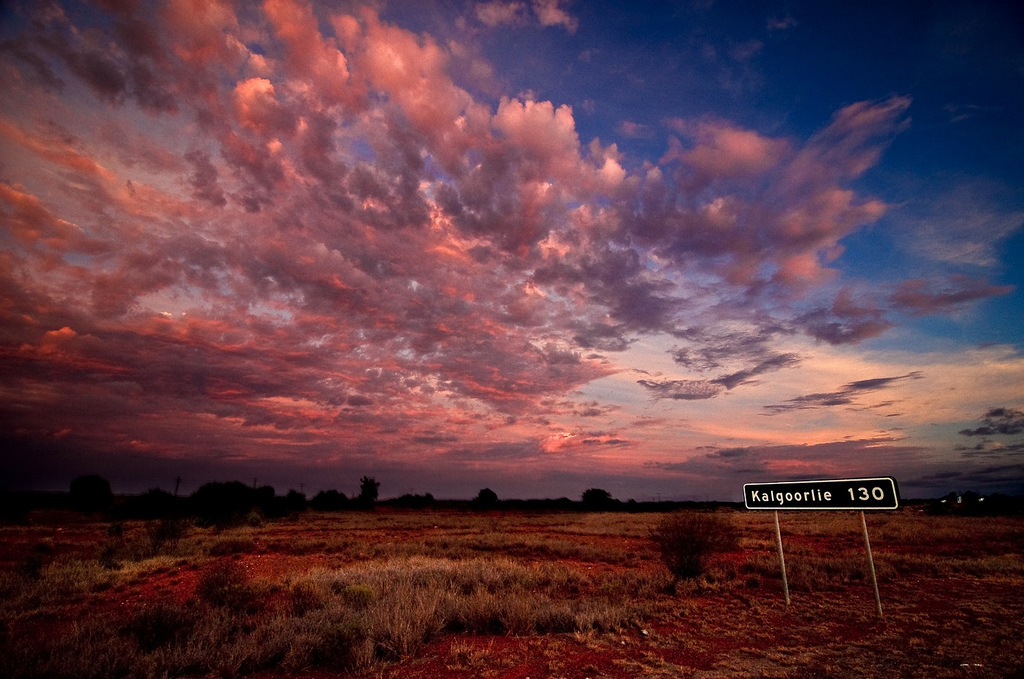 They call the harsh desert of the Aussie interior the ‘red centre’. Although this term has been commandeered by the tourism industry around Uluru (Ayer’s Rock) a satellite image reveals how vast this red central desert is*. Definitely not like a red bulls-eye on a dart board—this is a dart board that’s mostly bulls-eye!  Like Canadians, who live in a band along the southern border, Aussies live in a green band around the coast. Except when the minerals call….

So it was here in the vast, iron-stained deserts of Western Australia, 1200km from the ‘red centre’ but surrounded by plenty of red dirt, that I was driving. For four hours, with only two places (hardly even towns) to stop along the way, I was on my way to the biggest gold mining town on the continent. As I drove past road-trains hauling ore and hundreds of kangaroos in various states of decay, I thought back to my old stereotypes of this country and how well this drive matched them. When we got to Kalgoorlie, the caricature of Australia continued. We went for a beer at one of the pubs. (This town claims, like many others globally, to have the highest pubs per capita in the world). One of the many beautiful, (only) female bartenders served us—then asked if we’d like to donate for the removal of her shirt. Confused for only an instant, I remembered that this bar—and virtually every other bar in town—was a “skimpy bar”.

I met some very strange characters in the bar, who philosophized freely with me, the ignorant foreigner. They told me about the correct etiquette for patrons and skimpies; the benefits these bars bring to both parties, like how much money skimpies make; and numerous other half-baked ideas. The explosives course I was on (my reason for being in this town) also had quite a philosophical lecturer—in a more truer sense—who told us hilarious stories of his explosive hijinks as a youth when he blew up sand on the beaches of Sydney. But over dinner, we also debated the morality of modern society. And where could be more apt than Kalgoorlie?  The town’s also famous for brothels—many which have public day tours. At night, they’re open for another kind of business. 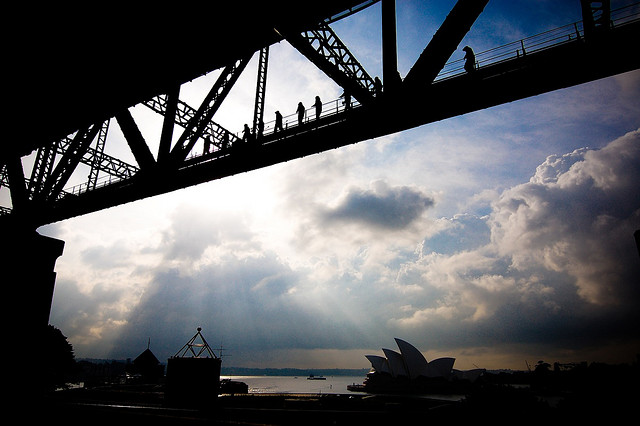 Bill Bryson raises the question in his book In a Sunburnt Country, regarding the naming by Captain Cook of this Australian state. Did the place remind him of new version of South Wales? Or was it a new, southern version of Wales? We’ll never know. But the mystery didn’t stop me from shuffling my work schedule slightly, and getting a week off to visit Australia’s largest city and it’s nearby mountain scenery.

In short, Sydney is one of the world’s great cities. It has a beautiful climate; a coastline of cliffs, beaches and rocky outcrops that winds endlessly around coves, inlets and bays. They’ve preserved and exploited the waterfront in a fine balance. There’s lots of high and medium density living, with decent public transit (including many ferries up and down the harbour). I sound like an advert, but I really liked the city! People there know how to ride escalators properly (stand to one side, damnit); have some fashion sense (no bogans in ugg boots and pyjamas); and were very interesting and helpful during my random encounters with locals (except the old crazy lady, who approached me ranting, swearing and spitting. She called me a ‘harlequin’, then bonked me on the head)

This infamously seedy neighbourhood near the heart of Sydney didn’t disappoint. The popular backpacker street is lined with hostels, while the curb is lined with rows of “for sale” camper vans and their loitering inhabitants.

I went to the famous center of King’s Cross—beneath a giant Coca Cola billboard—for some people-watching and photography. I watched an ambulance go past, then two horse-mounted cops, then a gang of 6 police officers walking the beat on a ‘routine’ patrol. Ten minutes later, the scene repeated itself! Another ambulance, horse-cops, and gang of walking cops. I watched a few people get arrested, and moved on.
A woman of the night offered her services, so I offered mine back to her, seeing what she would pay me.
Not even attention.

One minor reason for going to Sydney was to see an art exhibition by Olafur Eliasson, a Danish-Icelandic artist who had an exhibition a few years ago in London. I’d seen flickr photos of it and was amazed—he loves to interact with the viewer to mess with their perceptions of scale, space, perspective, etc. In this one he used the simplest elements of geometry, light, shadow, and mirrors to create awe-inspiring pieces I explored with the excitement of a child on Christmas morning.

Besides the joy the overall exhibition brought me, I got an additional boost from some of the many college art students on a class field trip. They were examining a very simple exhibit, where the artist has set up a spotlight in a dark room and aimed it at a slowly rotating disc of glass. The glass was treated in order to cause thin-film interference** (like your glasses, or a soap bubble).  This made the reflected light purple (moving slowly around the room as the disc spun) and the transmitted light yellow (fixed in one place on the wall behind the disc). As the glass disc rotated, the two colours thus changed in intensity—the yellow circle on the wall becoming more yellow as the spinning circle moving around the room became more purple—due to the effects of incident angle on the strength of thin-film interference.

This thin-film interference works upon basic optics principles (for anyone who’s taken high school physics), but to these art students it was baffling magic! I watched and listened in amusement as they debated the cause of these colours, and at one point stared into the (white) spotlight, hoping to see the spotlight changing colour. I love seeing science amaze people. And cause eye damage.

Eating Devices and the D-Store

I wanted to hike in the famous Blue Mountains just outside Sydney, but knew nobody to come with me. I like the extra adventure that strangers bring to the mix, so I found myself a couple camping/hiking mates online and we were off for 3 days. The Aussie with us, who knows about lavish Australian-style campsites, complete with gas grills, counters, shelters, water, and toilets, assured me our campsite would have water. It had an amazing view of the escarpment and valley below, and a luxury composting toilet; but no water. I decided our best bet was to befriend the other campers and try to mooch some water for our big day-hike, planned for sunrise the next day. We’d first greet everyone; then assess which group had the most favourable combination of friendliness and spare water; then, mooch away.

First we said hello to a couple in a rented campervan, and although the girl was friendly her boyfriend just stared at us and wouldn’t even say hello. Perhaps he thought we were being too friendly (with his girlfriend). In her french-Swiss accent she told us “There’s no point speaking to him, he doesn’t know english!”. Mystery solved. Level of friendliness: Reasonable. Water level: Low.

We moved onto a trio of unclean, heavily bearded, wild-looking young men. They were cooking some strange squash and spring-onion stew, beside their elaborately self-painted campervan. They were surrounded by an explosion of clothes, tent, surfboard, guitars, water, and food. Their kitchen table was the broken body of a guitar. We thought at first glimpse that they were daggy Australians, but they were immediately betrayed by their bouncy Swedish accents.
I can’t remember what we first spoke about, but it wasn’t long before one of them (Mats) appeared from behind the campervan, his arms full of spring-onions. He asked “Would you like some spring-onions?”
A strange offer, I thought. Definitely the first time I’ve been offered free spring-onions. But I hate spring-onions. I politely declined.

I wandered around a bit and noticed they had some loaves of bread. Seven. I asked Jans how he expected to eat them all before they went stale. “We don’t” he replied, handing me one.
“So why’d you buy so many?” I asked.
He leaned in towards me, and lowered his voice. I leaned in closer, and he began to speak quietly in his hilarious bouncy Swedish accent,
“Have you ever heard of dumpster diving?”
I was in stitches before I could respond. I was so proud of them, I even shook his hand right then. I loved these guys already.
He continued in a low voice. “Don’t tell the Swiss, we gave them a loaf earlier but didn’t tell them where it came from.”

The next morning we awoke to watch the sunrise over the valley below, from the escarpment lookout the campsite was built along. The Swedes offered us some oatmeal for breakfast, and some kiwi fruit (they had about 50). One of us didn’t have a bowl yet, as we hadn’t finished the container of apricots we planned to convert into a bowl.
“That’s okay,” Mats said as he offered his bowl. “We have plenty of ‘eating devices’.”
He reached down and picked up a spoon and a dustpan.

After a long and exhausting dayhike we made dinner from ‘rehabilitated’ food and stayed up late telling hilarious stories from all of our travels. They’d been working in Melbourne for a few months before this roadtrip began. Isak told us that he hadn’t even checked his mobile phone since he quit his job a month ago. “Actually,” he corrected himself, “I didn’t quit my job. I just left town, and turned off my phone.”

The next morning we visited behind the local grocery store, aka the “D-Store”, to see what the Swedes could find to restock their kitchen. It was a remarkable amount. And nothing in rough shape either — packaged fruit and veg still in saleable condition; cakes and snacks still unexpired; even a damaged box of gourmet Guylian shell chocolates. Isak coined a new phrase that morning, to go along with many of their other patented phrases.

Shameless self promotion: Check out these photos, because they can’t look at themselves. They’re a visual feast!  And low in calories.

P.S. Did anyone else know José González is Swedish? Born and raised!

*See for yourself. I began my drive from work, here.

**For an animation of thin film interference, visit this website