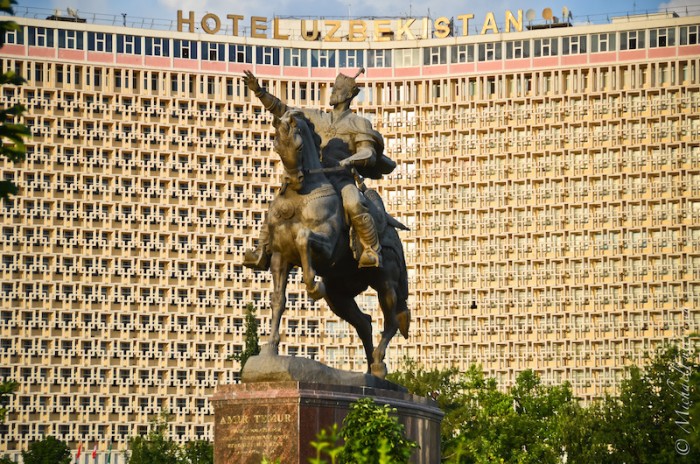 The first stage of the infamously frustrating Uzbekistan border-crossing experience is just getting to the customs officials. A dozen hands and nosy eyes examine my passport, inspecting each stamp as if one is going to read “ISIS Training School, Class of 2015”. Border guards, bored.

When I eventually get waved in, I fill out a form like other immigration cards, except it demands minutiae required by no other country. (What’s the value of my used iPhone?). I hand the form to the guard. He hands it back, and asks me to go make a copy. I ask where the photocopier is.

He laughs, and hands me a blank form.

In times like this, I remind myself that this is all part of the joy of travel in Central Asia. If it was easier, more people would come here.

The second stage of the ‘Border Experience’ (I should sell tickets) is the search. They ask to open my bag, and I let them. They quickly ruin my perfect block-packing job and lay everything on the table. “Do you have any books or photographs?” they ask. “Uh, yeah.” I’ve got an e-reader full of books, and I’m a bloody photographer! Thus begins the Uzbek Inquisition.

Many minutes later, the guard is still clicking through my hard-drive of photographs. He’s even calling other guards over to the screen to check out the best shots (specifically, bull-racing in Sumatra). I smile like a proud father. Consider this extra absurdity: Over the screen, there’s a growing line-up of disgruntled people waiting to get through the border – people unable to see the contents of the screen that (now, three!) border guards are gathered around. These people have no idea that their delay is caused by my photography.

The photo ‘search’ repeats for another ten minutes through my iPhone and camera. I’m glad I’m not a fan of bathroom-mirror selfies, because that would make even weirder the experience of having an unexpected stranger swipe through all your iPhone photos.

I’d already been there nearly two hours when one customs guard sidles up beside me, looking culpable. I fear he’s going to request a bribe. Instead he whispers in my ear: “Do you have any…. sexy videos?” His voice quivers on the word ’sexy’.

So I suppose I got off lightly. Maybe because they liked my photography? 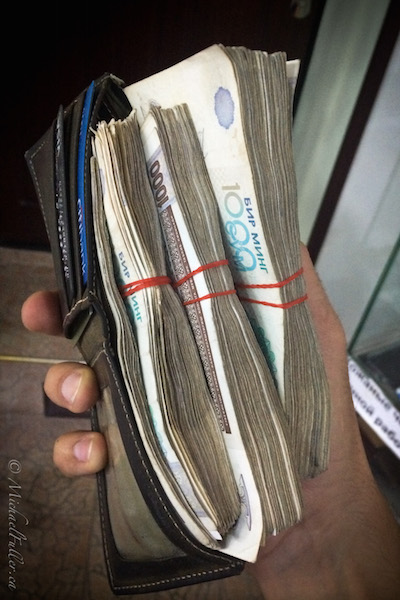 The joys of hyper-inflated currency. This’ll do me for a few days.

Roughly every hour travelling inter-city in Uzbekistan, there is a police checkpoint. The ubiquitous green-clad cops are nice enough – in three weeks, only one of them demanded a bribe, because Sasha stopped at the checkpoint but “didn’t stop long enough”. (The crooked cop asked for $75. Thankfully Sasha had experience running a business in Russia, so he’d haggled bribes before. “We’re not rich!” he told the cop as he opened up the back door of the car. “Look at my mattress. I sleep in this car, and him in that tent, just to save money.” They agreed on $25. Sasha went inside to pay, and when he came back, said “I saw a bag of marijuana on their desk. They offered me some. I said ‘no thanks’.”)

Entering the capital, Tashkent, the checkpoints stop but the police presence nonetheless thickens. They are positioned along every major street, every fifty or a hundred meters. You are basically never out of sight of the police, and if you are, you’re likely standing under a CCTV camera. The Russian slang for a police officer is “ment” , and I read about an Uzbek comedian at an international comedy festival in Russia attending a ball where they were all asked to dress in their country’s traditional clothing. He showed up dressed as cop. He told them he was from “Tash-ment”.

Just to enter a Metro station you’re subjected to two (half-hearted) bag searches, and you must show your passport, which the guards will examine from front to back, entertained by colourful stamps from around the world. I don’t blame them – we all love doing this – but the delays were becoming annoying, so I started carrying a photocopy of just my first page, to speed things up. The guards were visibly saddened.

The effort to enter the Metro is well-worth it: The stations are marvels of architecture and kitsch. During the Soviet-era, there was widespread repression of the arts. So an entire society’s creative-energy was channeled into very few state-condoned artistic outlets – like the design of Metro stations (also, bus shelters). Tashkent’s stations are considered the most ornate in the world.

Each station had a different architect, decor, and theme. In this poorly-lit subterranean environment, you are whisked between worlds. Some resembling an intricately-chandeliered foyer, others a Roman coliseum, the inside of a submarine, the inside of the Taj Mahal, Space Oddyssey 2001, the Sistine Chapel, or a candle-lit Victorian England (complete with vertical artisanal light bulbs made to resemble burning candles).

I’d have done an entire photo-essay on these stations, but the Uzbek-uitous cops definitely lose their joviality if you even mention the word ‘photograph’. Yeah, photography is banned – this is a police state! (a British tabloid once described the Uzbek President-for-life, Karimov, as a “boil-your-enemies dictator”). So you’ll just have to Google.

On my first day in Tashkent I wandered through the searing-hot, ultra-wide, pedestrian-hating streets of Tashkent. (Russian slang for a place that’s really hot? They call it “tashkent”). I was in a terrible mood. It wasn’t even summer yet, but it was 36˚C in the shade. But this wasn’t why.

I’d spent nearly two hours waiting to get a SIM card, only to be denied for not having the right paperwork by a relatively-lovely employee. With compassion in her eyes, she stated apologetically, “Welcome to Uzbekistan.” (the an unspoken message clear: “Be glad you don’t have to live here.”) But this wasn’t why.

That morning I’d realised that I’d forgotten my laptop charger in Kyrgyzstan – and I certainly wasn’t going back across the border to get it! There was only one place to buy one in this country, and it would sting me US$100. But this wasn’t why.

The previous day I’d nearly got into a punch-up with a cabbie, who began as the nicest man ever, telling me about his son in America and even stopping to offer me prune juice from a street-side stall, before later ripping me off by $10 on my fare. But this wasn’t why.

So why was I in such a foul mood? I realised it’s because I’d spent seven consecutive nights in seven different places, beginning with the snowy Kyrgyz mountains 1200 kilometres and a world away. I was exhausted. My back, my bag and my butt needed a break. Fortunately I found one of the nicest hostels in Central Asia, and a city with some lovely locals – and a few moneychanging con-artists.

I’d only been in the country for a couple days, and had to rebuild my sanity and patience for whatever would be thrown at me in the next three weeks in Uzbekistan. I had no idea at the time, but this would include carrying bricks of money around to pay for daily expenses; camping in 3rd-century ruins; climbing rusted skeletons of fishing boats beached in a sandy plain once beneath the Aral Sea; enduring nearly every day over 40˚C; getting stopped over 30 times by police; and becoming debilitatingly ill and unable to get out of bed for 36 hours.

And at the end of all that: Cross the Uzbek border, again. 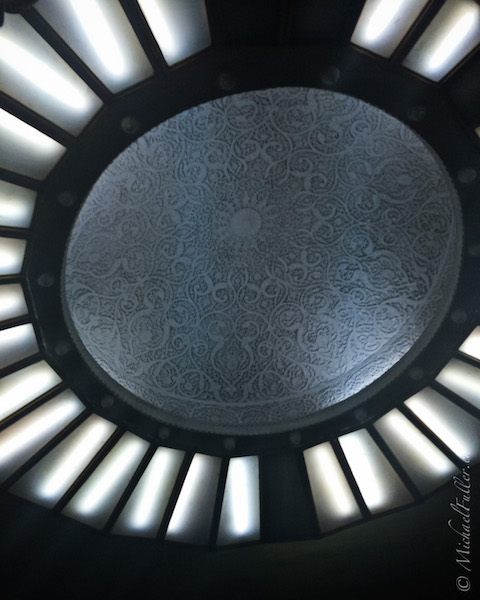 The ceiling in one Tashkent Metro station. The only photo I dared to take; police were everywhere. 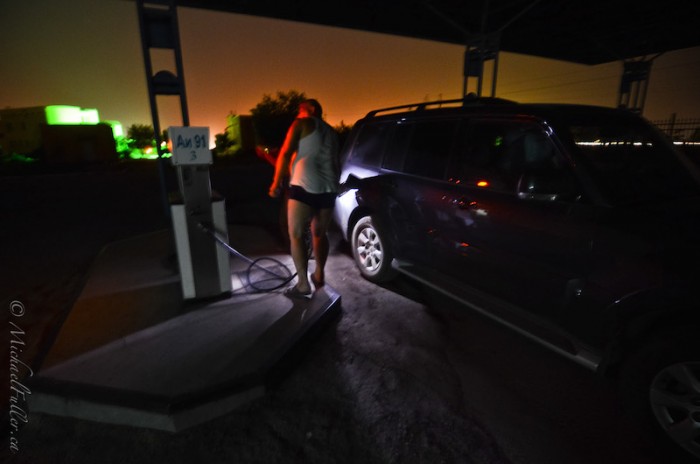 Buying fuel (discreetly) from an unofficial station. Yes, the attendant is in his underwear. 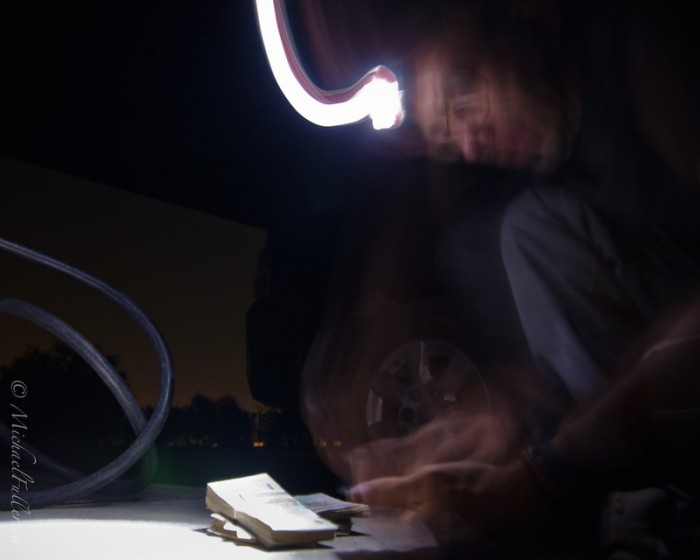 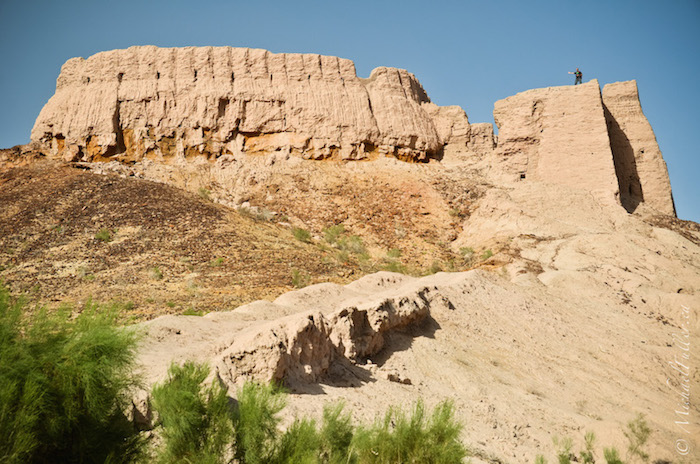 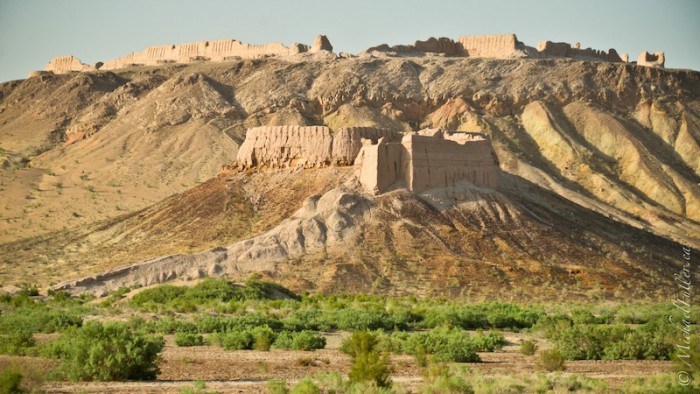 I wasn’t joking about camping in 3rd-century ruins.

No people in sight, but plenty of birds still inhabit these 3rd-century ruins. 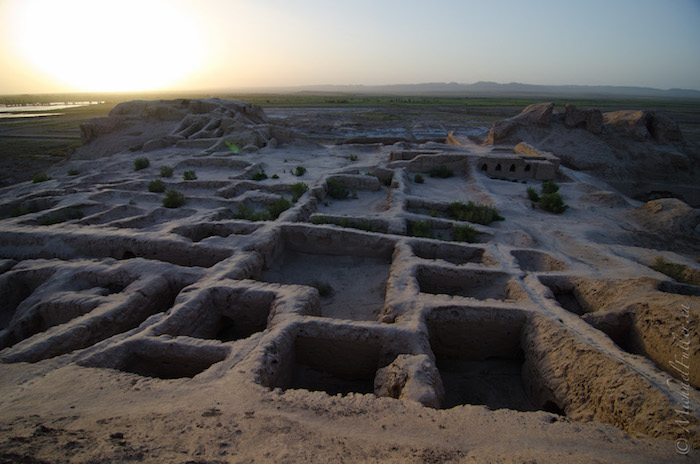 The desert sky is bright over our ancient ruins-campsite in Karakalpakstan.