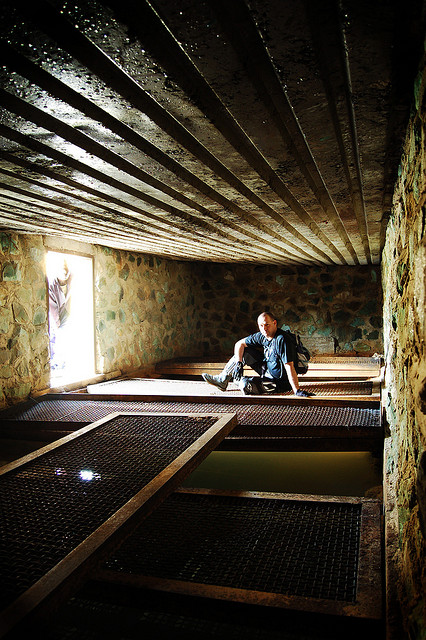 At night the temperature here drops into the single digits, and my tin-can accommodation has absolutely no insulation. Fortunately I remain comfortable with plenty of blankets, but I still dread that first contact of bare-feet to floor each morning. With the temperature rising rapidly early in the morning and never even a whisper of wind, the mornings are always comfortable. But the Zambians and Australians around here sure complain about the cold, especially at breakfast where we eat in an essentially open-air cafeteria.

On a similar topic, it appears that nobody here understands the function of the “defrost” setting in a car. Both Africans and Australians will get into a car on a cool morning, leave the heater off or set it to dash/floor, and then repeatedly wipe the fogging windows with their hands all the way down the road. The Zim woman with whom I surveyed in the bush absolutely refused to allow me to turn on the defrost heater. She was adamant that heaters ‘smell funny’ and we should just wipe the windows ourselves. Whatever.

During the monthly safety meeting the Mine Manager relayed a story about his time working at Palabora mine in South Africa, which is separated from Mozambique by a large game reserve. The mine had two large smokestacks that could be seen from over a hundred kilometers away in Mozambique, and escaping refugees would use these as landmarks for navigation to South Africa. The mine would frequently catch small groups of starving, dehydrated refugees who had come through the fence from the game reserve. The mine would give them food and water, and my boss then started asking them about their journey. He discovered that their party of 5 initially started with about 50 people! All the others had been bitten by snakes, collapsed from exhaustion, or been eaten by lions. The refugees actually came to be the primary food source for the lions of the game reserve. I wish I was joking.

The other night at the pub I was quizzing a few Zambians about marriage and relationships. Considering how westernized the people here are, I was astonished at what I heard.

In most parts of Africa including Zambia, a married man having a mistress or girlfriend is socially acceptable. Even further, a man is legally allowed to take multiple wives, but women cannot have multiple husbands. Most men who take multiple wives do it as a show of wealth or virility. But I’m told a jealous wife will sometimes poison the favourite wife. Or the husband. Most people here are understandably monogamous.

In a divorce, the wife gets nothing. And because the man is the “custodian of the marriage”, a woman cannot legally get divorced without his agreement. Amazing how the people are so devoutly Christian, yet are able to mix in traditional customs. I can just imagine the missionaries bargaining with the natives they encountered here hundreds of years ago…. “Alright, if you cut out the cannibalism, we’ll let you keep the polygamy. Deal?”

I promised the guys that with globalization and increasing women’s rights they would see these customs changing within their lifetimes.

Yesterday was the most fun I’ve had on the mine site yet. A 120 meter TV tower needed a cable brought up and connected to a radio repeater. It seems everybody around here is afraid of heights; meanwhile I was jumping at the opportunity to climb anything after so long without rock climbing. So after dragging up an increasingly heavy amount of coaxial cable behind me, I discovered that the plug did not fit the socket. Oh well, now I have to climb it again later.

In the afternoon my boss the South African Mine Manager (for description see the end of update #4) had invited me to come for a dirtbike/quad ride around the perimeter fence. I was under the impression it would somehow be work related — looking for damage perhaps. I didn’t expect being invited for something fun. But fun it was, oh boy. A 400cc quad can really rip, and on the open road I got it up over 80 km/h! The huge mine property has lots of trails ranging from footpaths to full-width roads, and there are lots of dirt pits to play around in. There are even zebra, impala, and elan (like a deer) on the property, but we could only find hoof prints today.

And it’s not because we were on loud machines — it’s actually much easier to find African wildlife from motorized vehicles than on foot. Because humans and animals evolved simultaneously in Africa, the animals are now instinctually frightened of a recognizable human shape. Hence why, (a) you cannot domesticate African animals, and (b) a car allows you to get up very close to animals without them running off, to the delight of safari-goers.

As usual I’ve posted plenty of new photos! Please take a look and feel free to comment. Click the thumbnail above.