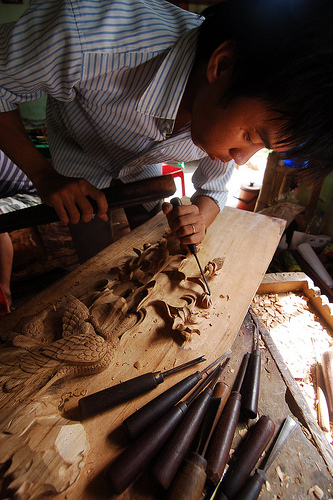 The Mekong Delta. The name carries with it exotic, dangerous, even haunting associations, from countless war movies. It was the first place in Vietnam I spotted, through my window.  From the air it appears a rich solid green, divided by hundreds of muddy, sinuous waterways. But the sun, reflecting strongly off this green, betray it’s true watery state. Even what looks like solid earth is flooded rice paddies or sodden plant nurseries.  I knew we had to go see things up close, later. Before I knew it, I was approaching Ho Chi Minh City, which looked like a mat of blocky, pastel-coloured houses poking up like Lego bricks.In HCMC, motorcycles rule the roads. They move fluidly past gridlocked cars in the congested streets. Hordes circle roundabouts like swirling schools of fish — especially when a bus approaches, like a shark, darting towards an elusive school that opens a gap only for an instant, the predator passing through unsuccessfully. The bikes outnumber cars at least 15 to 1. And people transport everything on them: sacs of instant noodles, saplings, air conditioners, framed paintings, porcelain toilets, fluorescent light tubes, granite tiles, 100L of water jugs, massive panes of glass, and Canadian backpackers.  Jon and I took our first trip 12km across town, on these “xe om” (literally ‘hugging vehicle’) motorbike taxis. We picked his driver because the man had a helmet with Che Guevara on it, and his name was Mao. How much more communist could you get? (Maybe if he wore a Kim Jong Il shirt)
Our next motorcycle-taxi ride a few days later wasn’t as smooth. With rain imminent, the drivers were confident they knew our destination 12km away. I became suspicious when he asked me for directions. But he really revealed his bluff when he stopped outside a hotel and called a woman over to ask me where we were going. By this point we´d been riding in the pouring rain for 15 minutes, aimlessly, as these guys had no idea where they were taking us!We left town to visit the Cu Chi tunnels, an elusive 230km network of brilliantly engineered passages from where the Viet Cong based their attacks on American-held Saigon. The Americans never succeeded in driving out the VC, despite bombing, flooding, and gassing the tunnels. The ventilation system could be controlled to channel gases into uninhabited areas, the drainage system moved water back into the Mekong, the chambers were too deep for bombing, with too many hidden exits to block them all, and too narrow and booby-trapped for Americans to enter inside.  I climbed down inside one of these tunnels, 3m underground. It was winding, humid, stuffy, dark and narrow inside, only 40x90cm. To move forward, I had to shuffle while squatting. I’m not claustrauphobic; I work in dark tunnels underground. But after a few metres I wasn’t too excited about turning the next corner. I decided to turn around. When I realized I couldn’t (my femur is actually too long), I felt a tad anxious. I blindly squat-shuffled backwards out of the tunnel and was happy that I never had to spend 4 minutes, let alone 4 years living down there like the VC did.
I’ve been pleasantly surprised by the common sense approach to safety and the environment this country has. Bathrooms have soap, buses and trains leave on time, everyone wears motorcycle helmets, and cities abound with rubbish bins. While we munched streetside baguette sandwiches on a hot night in the Mekong delta, the sky erupted with a monsoon downpour. A rubbish collector — a small woman in full raingear — politely collected our wrappers and empty water bottles. She turned and walked two steps before chucking it all in the street-cum-river. Pointing down the street I inquired, “To the Mekong?”. Beaming, she nodded, proud of her efficient work.I´ve uploaded a few photos with captions to my Flickr by clicking the thumbnail above. Please indulge yourself.
-Mike
(Mostly typed via iPhone. These hotels have free wifi!)P.S. Most ISPs in this country have blocked Facebook, so forget about contacting me that way.
P.P.S. I’ve had 3 women propose to me. So far.