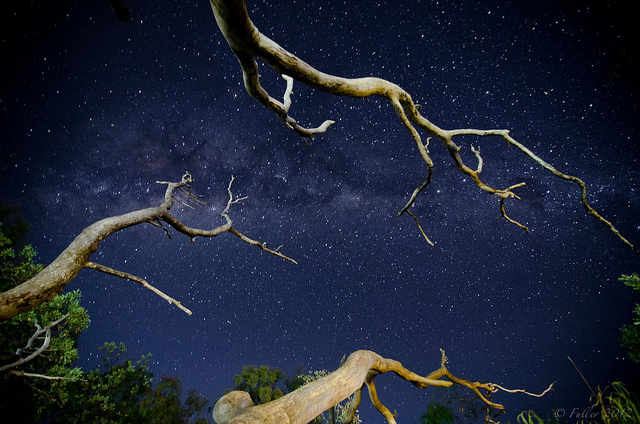 Sometimes on an airplane, you get seated beside such fascinating people that you actually enjoy flight delays. The Captain came over the PA, and my awesome seatmate Jacqui and I interrupted our conversation—which had already continued across two airplanes—to listen. He began (with a nervous laugh): “You’re not going to believe this folks, but we seem to have a knack for breaking airplanes today,” and then asked us to disembark and await our third airplane. I really wasn’t fussed.  It beats discovering your faulty fuel lines while airborne. Jacqui was telling me stories about the travels of her youth, which included the typically cliché and basically obligatory Aussie pilgrimage to live in London. Or so I thought. Her story unfolded differently than I had ever heard before, because she traveled Australia to London overland. In the 70’s, as a twenty-something year old woman with one female companion, her independent travels by bus and train took her through Indonesia, Pakistan, Afghanistan, Iran, and Iraq. This was one awesome grandma.

Another reason our delay didn’t phase me, besides the fact that I’m such a laid back dude, was Sam smuggling us into the Qantas Club frequent flyer lounge where I stuffed myself with granola. Later, Sam entertained us with his rendition of the obscure Australian song, “Where Does a Goanna Go?”, sung with a rural Queensland accent. I should have recorded it for you all. Or, at least those of you who know what a goanna is, and can appreciate the hilarity of a fake rural accent from a guy with hipster glasses. 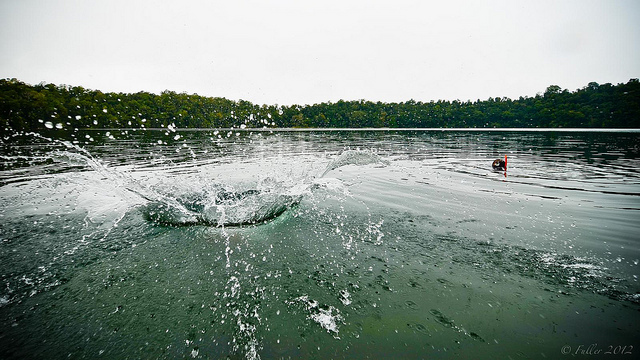 The day the trip began, Kathleen and Lauren both unknowingly lost their mobile phones within an hour of each other. When Erin went to pick up her sister’s phone from the police station, she couldn’t prove the relationship. So she rang the phone, which brought up her own silly face, and her own silly voice in a customised ring-tone comically singing “Hello hellooooo helloooooooo!”. The cops took that as proof enough, laughed, and handed it over.

The trip only got stranger and more hilarious with each day. At one point Zaneta used orange peels as deodourant. Kathleen chopped a cane toad in half with a shovel. (yes, she’s an inhumane monster. But we already knew that).   Late one night when I remained at the campfire with some friendly marsupials, Zaneta suddenly yelled in her sleep “I LOVE YOU I LOVE YOU I LOVE YOU I LOVE YOU I LOVE YOU”—and somehow neither her, nor her fiancée awoke. Erin dropped her mother off at yoga class one morning, which is held at a nearby retirement home, and saw the yoga instructor arriving to class with a walker. 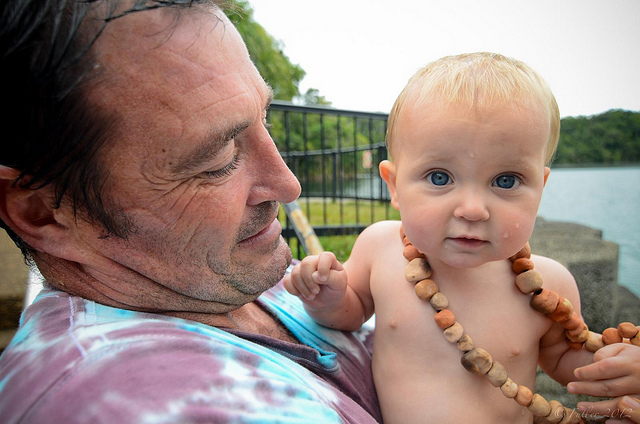 Living in southwest WA one cannot imagine the diverse, contrasting natural and biological features near Townsville, which sits at the nexus of ‘dry’ and ‘wet’ tropics:  From coral reefs to rainforests, mountain streams to volcanic crater lakes, arid outback tablelands to koala-infested granitic islands. And on the human scale, Townsville is home to mine workers who do fly-in fly-out, academics at the enormous university, military brats both army and air force, dirt-poor backpackers and tourism workers, dockers at the port, researchers and marine scientists on the reef, and surrounded by farmers of the beefy and wooly variety.  All in a city with less than 200’000 people.  And with a name that’s essentially “Towntown”.

Exploring this part of Australia also exposed me to wildlife, both familiar and new. We went night canoeing on a lake to find owls, platypus and tree-kangaroos. I was joined late each night at the campfire by some bettongs (aka “rat-kangaroos” the size of beavers). Currawong birds invaded our food bags when camping, and kookaburras laughed at us incessantly, which I love, because their laughter makes me laugh! We spotted wild koalas (though hardly ‘wild’, they’re generally pretty relaxed). And had numerous encounters with the creepiest of all birds, the bush stone-curlew, which sneaks up behind you but when you turn around they freeze and stare blankly at you with soulless eyes; or even creepier, sneak up behind you in the dark, unseen then suddenly sing their “harbinger of death” call. 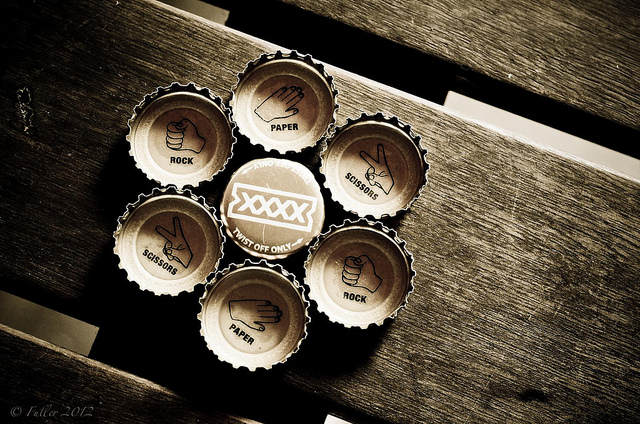 One of the beers of WA is called Emu Export. It’s terrible—really, don’t bother ever trying it. The main beer of Queensland is called XXXX (pronounced “four X”) and comes in “Four-X Bitter” and “Four-X Gold”.

If you don’t like puns, you may want to avert your eyes.

Sam conceded, “That was gold.” 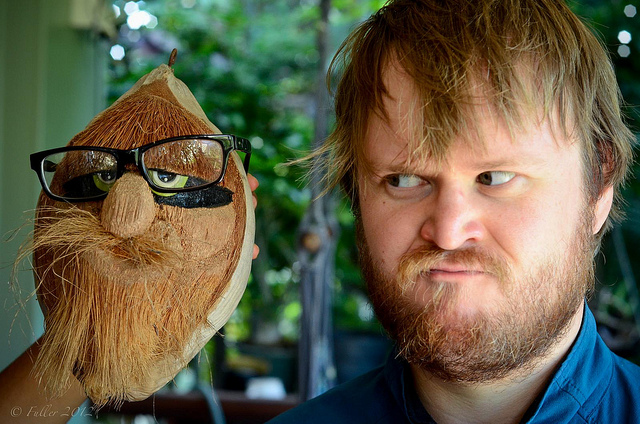 As the trip went on, our puns got worse—and so did the car suspension. The 300km dirt track across the outback didn’t help things, and we began to bottom out the suspension on every bump.  We nearly lost the muffler every time we reversed over a bump.

But like all old Toyotas, it never let us down, and we squealed and thudded our final few hundred kilometres back to Townsville. There on the Patrick family’s beautiful riverside paradise we avoided crocodiles canoeing in the river (we were canoeing, not the crocs); feasted on countless tropical fruits fresh from her neighbours’ trees; and on the final night, we had an enormous backyard bonfire with dozens of neighbours and family friends—and us, the stranger strangers, made many new friends.

Indulge your senses with the bird calls linked above; some colourful photos on www.michaelfuller.ca; and some educational videos on my YouTube channel. 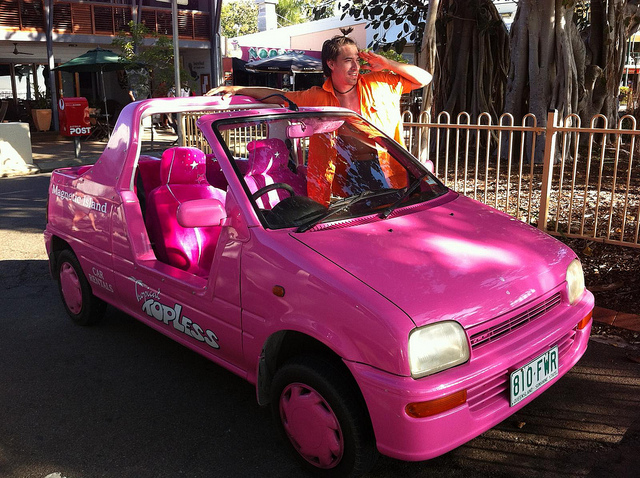 A huge thank you to all Patricks, even those that murder cute and innocent cane toads. And to the rest: May your next airplane seat-mate be a bold and adventurous grandma,

P.S. A goanna is a big lizard. And if you’re curious where he goes, when he wants to go on a trip, well:

» Experiences, Oceania » Where Does a Goanna Go? (Northern Queensland, Australia #18)