Thousands of Kilometers. Down the Yangtze. Shanghainese. (China #4 to #6) 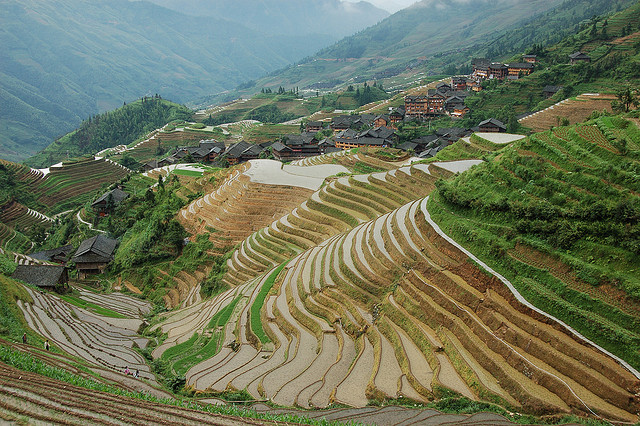 In the last few days Oker and his Mandarin has allowed us to have some pretty unique experiences. When walking in the Long Ji rice terraces he was in his usual state of hunger and asked a goat-herding peasant if the nearby village had a restaurant, which it did not. Long story short: We got fed delicious rice and soybeans in her house, and toured her subsistence farm. This wasn’t our first or last time inside a peasant’s home; Oker makes a point of exploring villages and their inhabitants in every new area of the country we visit, something we could never do without him with any success.

I think it was the previous day’s dinner when we ordered some bamboo-shoot chicken, and were told that we’d have to order another chicken dish to justify killing the chicken — “Kill the chicken? Really? Can we watch!?”

Of course we could! So we went out back and pulled a chicken from the cage, which the owner of the restaurant promptly handed to me to hold awkwardly. And within an hour the chicken was no more than a pile of meat (beak, feet, brain, and all) on our table, in various dishes. We got to stand in the kitchen the whole time, learning how the neck is slit, blood is drained, hot water is applied to loosen the feathers, and how it’s gutted. All the while Oker with his camera right in the action (getting splattered with some blood during the chopping stage). We explained that we don’t keep chickens in our yards in Canada, and the woman wondered how we’d ever taste fresh chicken.

Now to address the subject of the email. My professor advised me that a really beautiful route between Ping’an and Guiyang would be well worth the bussing overland. The road, relatively straight on the map, looked about 400km long and we planned to leave at 7am to catch a 10pm train (a pretty conservative estimate we thought). After our first bus into town from the village we spoke to the bus station attendant. In China nobody really knows the bus routes that other stations offer, so she wasn’t very helpful, but did suggest we backtrack the opposite direction by 2 hours south in order to get a bus north again. Preposterous, we thought, and a good way to waste 4 hours.

So instead we grabbed a bus to the next town along our route. In the end this trip required bus; bus; taxi to an impassable mud pit formerly a road (remember we’re going through a province hit hard by flooding); boat ride around the impass; another taxi over the worst road imaginable while crammed between Alex and Oker in the backseat of a poorly ventilated van that covered 60km in 4 hours on a humid day, and at one point featured us singing along to the only english song we heard – by the Backstreet Boys of course; bus ride to a completely untouristed town where we slept the night after trying in vain to find a single available computer at two internet cafes bursting full of people. In the morning our final 6 hour bus ride wound through mountain passes and minority villages, to the soundtrack of Oker vomiting loudly. Then we boarded our overnight train another thousand kilometers to Kunming.

Our land route of 400km took us 7 legs and 20 hours of travel to complete. But the scenery of all the minority villages, mudslide damage (they’re putting huge buildings up right next to oversteepened slopes already showing plenty of landslide potential), and strange towns (where all the rubbish bins are colorful mushrooms, or small towns with 4 lane wide concrete roads fit to drive tanks down), and the random adventure of it all, was well worth it.

We continued on hundreds of kilometers more, to a town as close to Tibet as anyone can get these days (Tibet is closed until at least September): Shangri-La, formerly known as Zhongdian before the government renamed it to attract more tourists. This place is a Tibetan county, so it’s populated by the same people that reside in Tibet, and is at high altitude, so we’re happy to be here in comfortably cool temperatures.

I’ll leave you with a few random observations.

Down the Yangtze (China #5) 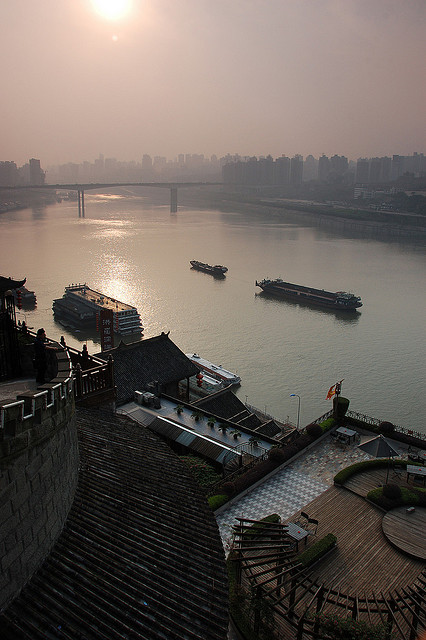 The mosquitoes in Canada are large, slow, and dumb. You can usually get them but if they bite it would itch. In Zambia they were tiny, slow, and pathetic. If they bit, you didn’t even notice (unless you got Malaria – then you definitely noticed). In China they are small, fast, and stealthy – likely from a billion people swatting at all the slow dumb ones. And their bites itch! We’ve seen some people with scars all over their arms from scratching the bites.

On the surface, traveling here you see the various cultural differences that you see anywhere, and welcome them for teaching you something new about the world. But when we look closer here we’re often struck by the strange (to me of course) subtleties that pop out every now and again, many while in Lijiang:

We walked the cobbled streets of old town past a club blaring some Enrique Iglesias latin pop, but it was the ‘Rasta Club’. It featured the first black people we saw in 2 weeks in China, pounding on drums next to the DJ.

Later that night in the streets after the bars closed (mandatory at 11:30 for noise reasons – and they don’t push it by even a second) many young people took the a public square for guitar and beer by candlelight. As I joined them, the dozens of people present, joined by passersby around, would often break out into an emotionally charged chant “Sichuan, Jaio, Sichuan, Jaio” which I thought was another Chinese pop song everyone knew the lyrics to. But I was told it’s actually a nationalistic chant for Sichuan province after the earthquake disaster.

The next morning on the news broadcast from the only english channel, CCTV 9 (remarkably apt acronym that station that controls most of the TV channels – it actually stands for China Central TV station), I heard a news report about the Dalai Lama supressing religious freedom. The reporter described the ‘hypocrite’ Dalai who dared to speak of freedom when his own brute squad was being sent around to beat up and burn houses of Indian Buddhists who don’t consider him their leader but instead consider Dorje Shugden. The anchor actually scoffed and shook her head with disgust at the Dalai at the end of the story. Searching Google (after Chinese firewall filtered the results, of course) I find nothing but anti Dalai Lama news and more information to back up this story, but I really wonder what’s going on.

Later that morning as we walked down the street looking for cheap bubble tea (only $0.40!) we were passed by a half dozen marching soldiers in full fatigues and storm-trooper helmets — led by a soldier with a machine gun strapped on his back — just out of a pleasant morning march down the main street of town to reinforce to the city that they’re here, and ready, whenever their needed. We’ve seen large trucks with an open tray at the back, driving very slowly through the street; the back full with a dozen soldiers all intensely scanning the surroundings (us, the public) as they pass. And once while on a night bus, we were awoken late at a random police checkpoint where a cop boarded the bus with video camera in hand and pointed the camera one by one at each passengers face, recording us all “for our own safety”. Wouldn’t all this make you feel safe and secure?

Despite proximity to Japan it’s uncommon to find Japanese cars here. I wonder how much this has to do with the two country’s long history and deeply rooted feelings towards each other. There are plenty of VW, a few American, many Chinese brands, and plenty of French cars (in line with this country’s love affair for France – which has got to be China’s favourite after their own).

In Chengdu when we were wandering the Trust Mart (like a small Wal Mart) nearing closing time, there was plenty of people buzzing around us in the store. We failed to notice at first, but they were all employees. Dozens of them. As we browsed the aisles near the checkout, about a hundred employees streamed past us and then formed multiple line-ups in a militaristic fashion. This was in a store that would have a dozen employees in Canada. The mob blocked the exit, and we were directed by their boss (or commander, I don’t know which) to come through the crowd. The sea of employees parted, and we passed through half laughing and half staring incredulously at what was going on there.

A few days later we went into a real Wal-Mart, to compare to what we’re used to in Canada. The prices aren’t a whole lot different there than in Canada, because its all Chinese goods but without the shipping costs added. But by comparison to the rest of China, this makes Wal-Mart the upscale department store people with money will go to shop – a total inversion of its role in North America.

I’ve just come down the Yangtze from Chongqing to Nanjing (two cities referred to as ‘burning furnaces’ for their summer temperatures) by dingy Chinese passenger ship, and by train. We met some people who’d never seen white people before. That was really something else. 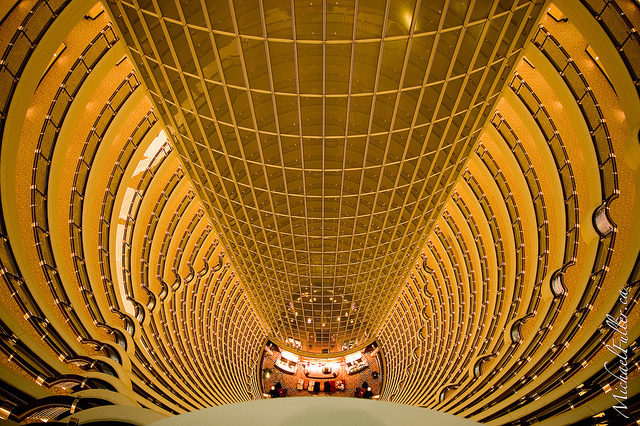 Shanghai has been an awesome rest stop, and a huge transition point for my trip. I arrived here with Bronwyn, Oker and Alex to meet former roommates and soon-to-be-married friends Barry and Christine for a few fun days together. First Alex left for Toronto; then Bronwyn to Japan; finally B&C to Belgium to get married. And I’ll be leaving tonight with some Irish lads to climb Huang Shan mountain before meeting Jordan in Beijing. For my last dinner with B&C, I had some rice dish in a franchise restaurant, and suddenly realized that I was holding a fork for the first time in over a month.

Another fond food/drink memory will be a coffee Alex and I had together, back in Chongqing (which we visited purely to see a vast and polluted city; and it delivered). Our $4.5 drink at Also Milo Coffee included a view of downtown, in a venue with hardwood floors, granite counters, and live piano music. It also happened to cost as much as our night’s accommodation.

In Lijiang, Nanjing and here in Shanghai we’ve visited a few fantastic discos. In China the clubs play great music without covers or lineups, and (in Lijiang) we were the center of attention everywhere we went. Strangely, the clubs in Nanjing had at 3-4 elderly police officers, slumping against the DJ table half asleep. When we exited the club we chatted to some university students who had no idea where Canada was. Or America. Or Europe. In fact, they couldn’t even name any countries adjacent to China except for Japan.

I can really see my surival-Mandarin coming along, thanks to some help from Barry, and his former coworker and now Mandarin teacher “The Crystal” (she prefixes everyone’s name with ‘The’). The dialect spoken here is, at least according to the locals, ‘standard Mandarin’. Even if it that’s untrue, it’s an easy dialect to understand.

If I can’t fully communicate with people, I can at least say enough to make them laugh at me. And I hope that soon my broken-Mandarin combined with the average level of broken-English most young people speak will sum to an effective level of communication. We’ll see.

» Asia, Experiences » Thousands of Kilometers. Down the Yangtze. Shanghainese. (China #4 to #6)