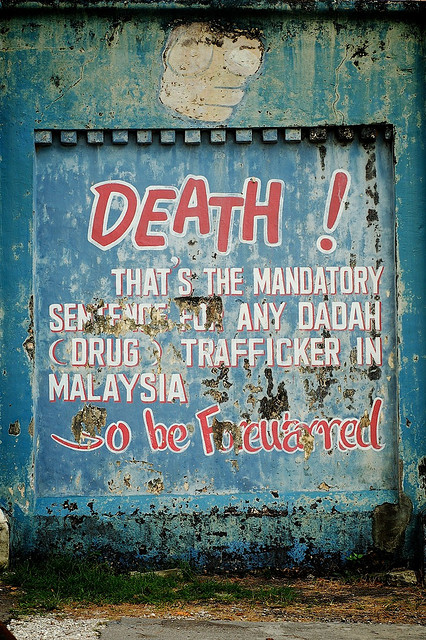 I took my last breath of airconditioned Australian air as I prepared to disembark. (I already liked this country, since they used the correct verb ‘disembark’ instead of the outrageous Americanism ‘deplane’). I stepped out of the plane—onto the tarmac, of course—and filled my lungs with sweet, tropical, major-city-in-a-developing-country air: A combination of tropical forest, dirty fuel combustion, exotic food, sweat, impending rain, and sewage. Just delicious!

I hate to read play-by-play travelogues, and avoid writing them, but I need to illustrate the great diversity of mostly food-related, and mostly cheap experiences possible in KL. My first full day in Kuala Lumpur:

Jackfruit followed by Chinese steam bun for breakfast, monorail to Chinatown to explore. Get a traditional back/arm massage ($10). Malaysian nasi goreng kampung (fried rice with egg, prawn, chicken) for lunch with a pandan-almond-coconut cake snack, then back to the Golden Triangle area to hunt for electronics deals. After an exhaustive floor-by-floor exploration of the six-storey electronics mall—which takes hours and requires meticulous note-taking to relocate the cheapest places again—I bump into a hostelmate in a street cafe and join him for some hookah with mint shisha and enjoy a starfruit juice.

Then I hike over to the 4th largest telecommunications tower in the world (CN Tower being the tallest) and watch the sunset from 275m (this was an expensive $12 but has a higher viewing platform than the Petronas Towers—formerly the tallest buildings in the world). I descended the tower, ate a Malaysian waffle-cake with kaya (coconut & caramel spread), then found a fine sushi restaurant for dinner (with promotional prices: $2 dinner!). On my exhausted walk home I found a nice cocoa soya milk in 7-11. Total food cost for the day: $10!

Malaysia is divided into two separate land masses, KL being in West Malaysia. I make it a habit of visiting United Nations protected sites (UNESCO) if I’m ever nearby, and two hours south of KL is a a town built up around what was once a vital stopover point for traders between East Asia and South Asia, Melaka.
While on a wander I encountered the most curious of gangs. They were all dressed in black, had matching t-shirts, and appeared to be sponsored by Nikon. They turned out to be a club of Malaysian Nikon digital SLR photographers, each with their nicknames on their shirts and the shiniest, most expensive gear imaginable.

One guy jokingly maintained he only shot with the kit lens (the standard lens that comes with a new camera), but take a look for yourself. He held a lens worth five-times the price of a kit lens! I made fun of how shiny their cameras were, comparing their straps’ bright “Nikon” logo to my well faded and worn out logo. They told me how cheap you could buy a new Nikon strap in Malaysia. I told them they are missing my point! They were such a good spirited bunch and we had a lot of laughs in just a few minutes. We’re all Flickr buddies now, so I can see that most of them are remarkably talented. I usually worry when I see people with shiny cameras.

If the cameras didn’t already give it away, I think some of them have a bit of money: One guy has photos of his friends tackling each other on the shiny hood of their Ferrari.

A few observations about Malaysians and KL:

– despite Kuala Lumpur being the shopping capital of the world, I witnessed a handful of people boarding the escalators as if it was their first time. They stood ready at it’s base, staring down at the moving steel before them, waiting for the precise time to step forward as if they were preparing to leap from a bridge onto a moving train.

– The Petronas twin towers as a landmark an added dimension of navigational usefulness than a traditional single skyscraper. A regular single tower will tell you, with a glance from any point in the city, how far away you are from that landmark. With no other tall buildings around, you don’t know which direction you are from the landmark, only the distance. But with twin towers, by seeing how much one eclipses the other, you can glean a second piece of navigation information: Knowing your position relative to the axis of the two towers (i.e. whether you’re north/south of them, or east/west of them). Now if only they made them different colours, you could then figure out your location precisely from anywhere in sight of the towers.

– In Canada we have Chinese-Canadians, but in Malaysia you have Malaysian-Chinese. I asked around and met Malaysians whose grandparents emigrated from China as children, but these 3rd generation Malaysians first language was still Mandarin. Despite the multicultural flavour of KL (with enormous populations of well-established Indians, Malays, Chinese, and even Indonesians; and large groups of Muslims, Buddhists, Hindus and Christians), these cultures all remain very insulated from each other. Public schooling is in Malay language, but even if Malaysian-Chinese students attend these instead of private Chinese schools, they still keep almost exclusively Chinese friends. Of course, similar people will always associate, but I was surprised to see how strongly the culture is carried between multiple generations. It made me appreciate Canada even better, for we have more of a ‘salad-bowl’ of cultures, allowing me to have European-Chinese-Indian-Hindu-Muslim-Christian-Atheist friends.

On my last day in KL I finally had the random meetings and discoveries I love about traveling. I began the day wandering down to the monorail station and passed an enormous, decrepit, abandoned prison taking up a huge block of valuable real estate in the core of the city. I found a guard tower door open and climbed atop the tower to look inside and take photos over the wall, but didn’t dare to climb down into the prison in broad daylight beside a very busy street and monorail line. (Something for the next visit!)

As I wandered around Little India I found a busy place to eat and was seated at the same table as an older Chinese-Malaysian gentleman. He had round-frame eyeglasses and a wispy, grey beard. We got talking, and I found him to be well mannered and educated. He then let me know that he was bound to London soon to be “conferred as a Duke” for his “services to the Queen”. He wouldn’t elaborate on what services those were, because “people in Malaysia don’t much appreciate the Monarchy” so it’s a sensitive issue.

He then went on to tell me that Michael Jackson died from skin pigmentation complications due to excessive sweating while performing (he knows this because he studied medicine); that he’s a harbinger of a radically new generation of Muslims; and that his ancestor was the 2nd agong (head of state) of Malaysia, Sultan Hishamuddin. At least he has his facts straight about the Sultan. We had some other interesting discussions, as he wasn’t a raving lunatic, but soon the restauranteur was ushering him away—to make room for more hungry customers but also with the knowing smirk of a man who knows this guy regularly entertains tourists.

The next encounter was with a couple of young Filipino couples, who greeted me on the street with “Hey, nice shoes! Where did you buy them?”. Even if I wasn’t wearing boring hiking shoes, the random greeting would have set off alarm bells. I replied “Canada. Calgary actually. But I’m from Toronto.”, and with great surprise he said “Really, Toronto! Wow, my cousin is going there soon to work at a hospital!”.

Here we go, I thought. Let’s chase this rabbit a little bit. I’d heard of this scam—a popular one in KL—which starts with this ruse.

I entertained their friendliness a bit more, and they tried to build some rapport. The whole time I was acutely aware of my wallet, iPhone, and camera. They wanted me to meet their cousin for coffee to answer questions about Toronto, which I agreed to, until they told me she isn’t around here but off in some suburb. I kindly declined of course, and emphatically offered my email for any questions she had. They took it without any enthusiasm. Then they promptly said farewell and jumped onto a public bus.

Even though I was very careful, due to the rapidity of their departure I had the inevitable mini panic attack as I searched myself for what they may have pick-pocketed. (The last time people ran off that suddenly was in Zambia when I got temporarily conned) What did they take? Nothing! I even searched inside my wallet in case they had magical money-teleporting powers. All the ringgit were right there. I felt a strange mix of curiosity and dissatisfaction, wishing I could have figured out their plans.

Next time I’ll set aside more time for aimless wandering, and if I encounter scammers, just ask blatantly, “So how does this scam work?”

If you’re not familiar with the routine: I’ve put up photos on my Flickr site by clicking the thumbnail above. Check them out and comment freely, either on the site or by electronic-mail.

P.S. If you’re curious about my shopping, I picked up a 500GB USB/Firewire harddrive, a Tokina 11-16mm wide-angle lens, and great Japanese glasses. By avoiding outrageous Australian prices, I saved nearly double my flight costs.