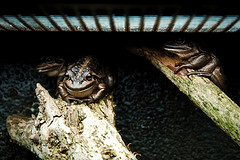 On my first night back from the mine I was driving in my flatmate Peter’s car when we arrived and parked in the driveway sometime in the night. You know you’ve been mining too long, when you’re fumbling in the dark for the door handle and decide to reach up and turn on your cap-lamp, only to find you’re not wearing one.

No two weeks are ever the same here at the mine. Because the shift supervisor, loader & drill operators work week on / week off, whereas the rest of the crew work two weeks on / one off, the group dynamic changes every week. I’ve been enjoying this recent week of work because of the fun, quirky, quality guys (and gal). The crew I first began working with months ago at the other mine — this mining camp has two adjacent mines run together, and miners sometimes switch between the two — had a few really demonic personalities. With total darkness, overwhelming noise, oppressive heat, and time constraints to get work done, the stress levels can run high. Add a dash of inexperience (a.k.a. Yours Truly) and you’ve concocted quite an explosive mix. I witnessed some coworkers transforming into beings of pure stress, and had people cursing themselves blue in the face at me. But these short, demonic outbursts would often soon evaporate: Many people were helpful later, explaining what they were trying to tell me during the curse-hurling.

I did a few nights of dump truck training last month. Despite the 650 horsepower engines, these trucks never really go faster than 15 km/h, and top out at 6 km/h when fully loaded with 55 tonnes climbing up. In an entire shift they may not even travel 100km. But the staggering and humbling reality of that much horsepower hits you at the fuel pump after a 12-hour shift, when you pour in over 600 litres of diesel. This is one of the stark reminders of the environmental and economic costs of running a mine.

Last month it dawned on me that I had not yet learned how kangaroo tastes. Most Australians don’t eat kangaroo, as it’s only been legal nationwide for 15 years. In 2005 they even had a naming competition to decide on a culinary name for the meat. “Australus” won, but I would far prefer “jumpmeat”. Regardless, neither name has caught on, but the meat is widely available in supermarkets. So off I went. Asking the clerk where to find it, she quickly responded, “Oh, let me show you. I wouldn’t want you to accidentally buy pet food.”

Well, that’s not something I expected to hear. She showed me where the roo meat was: In the same section as pet food, but right on the edge near the human-approved meat. And separated by a divider from this human-grade meat. A pretty funny place to put it, I reckon, and suspect that as it slowly becomes more acceptable the supermarkets will migrate it closer to the beef, pork, and chicken.

And the results? Well let’s give you some background first. The meat is very lean, and must not be overcooked. How lean is very lean? Consider that tuna fish is a fantastic healthy source of protein, partially because of it’s enormous 15:1 protein to fat ratio. Scanning the kangaroo nutritional information, I learned roo meat has more than double that ratio. And ecologically? Kangaroos don’t overgraze the native plant species, require less water and feed than sheep or cattle, and since they’re soft-pawed they don’t damage the fragile native grasses like feral hoofed farm animals. With each bite, you’re practically saving the Earth.

I’ve been updating my website with lots more informative photos from the neighbourhood, the zoo, the aquarium, and the mine! Please have a peek by clicking the thumbnail above!