As expected, we’ve had a few snags trying to surf the internet since arriving in Myanmar over a week ago. We’ve barely even waded in it — I’d call it splashing. During the few minutes each hour that the internet is actually working and assuming there’s power, we’re still restricted by government firewall from accessing Yahoo (which owns Flickr), Facebook, any real news websites, any website with ‘blog’ in it, and much more. And the speeds make me reflect positively on my 14.4-kbps modem days. 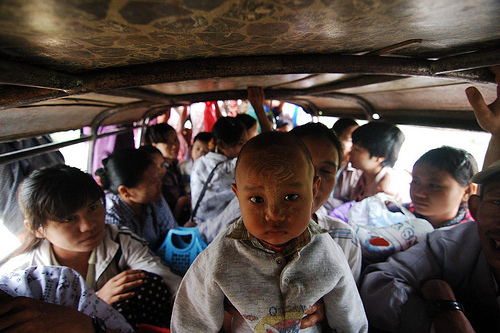 Arrival
Besides the strange VIPs on our flight to Burma, including a Kim Jong Il look-alike with wiry, 15cm-long neck hair; and a clan of spoiled, stiletto-heeled Asian bimbos with iPhones 4, our flight was uneventful. The captain informed us that we were landing on schedule, 30 minutes earlier than our itinerary stated. So our airline obviously wasn’t aware of Burma’s 30-minute time zone shift. We’d have a wait for our hotel pickup.

After customs, we were met by an overly-friendly Burmese man, dressed like almost every Burmese, in a plaid longyi (like a sarong). He welcomed us warmly to Burma, but informed us that our hotel always forgets to pick up their passengers. He graciously offered to take us in his taxi. He was even kind enough to tell all the other backpackers the same thing. Taxi drivers are same everywhere. Fortunately the rest of the people in this country are unimaginably kind.

Something Fishy
The longyi’s have no pockets, but we’ve seen many creative workarounds. A fisherman we noticed tied his longyi with a front pouch, where we dropped all of his still-wriggling fish.  When playing their favourite street game of wiffle-ball hackey-sack, men make their longyi’s into shorts, with a sumo-esque strip of fabric pulled underneath and tucked behind. And when carrying wallets they tuck it into their waists against their lower back. I noticed the few trousered men, despite having pockets to carry their wallet, still carry it the same way.

Colonial Charm
As usual I love noticing the quirks of a country that make traveling here like nowhere else I’ve been. They are one of only three countries officially on the imperial system (keeping good company with the USA, and Liberia). They changed their flag (didn’t you hear?) just two weeks ago to a very post-colonial-African combination of yellow, green and red stripes, with a big star in the middle. (Ghana, don’t hold your breath for royalties). The power never goes more than a few hours without interruption, even in the largest cities. So in front of nearly every building in Yangon and Mandalay on the sidewalks citizens have installed large diesel generators. With these oily monstrosities, mangy stray dogs, cars without headlights, piles of rubbish ready for burning, and few streetlights, you’ve got one filthy, pedestrian-unfriendly obstacle course.

The (former) capital city, Yangon, is a charmless place. The old colonial buildings are all filthy, dilapidated, grossly stained with mold from the humidity. Jon likened the appearance to some post-apocalyptic city after 20 years of zombie occupation. Our hotel was near one particularly enormous, even palatial, colonial estate in disrepair. We noticed behind two walls of barb-wire fence, separated by an open sewer (the moat, as it were), some squatters washing clothes, evidently living in this burnt-out mansion.  But then we noticed they were washing their police uniforms!

Mandalay, the second largest city was only mildly better. We visited the nightmarket, which sounded great, except that due to road works, at its center was an open sewer. And when we arrived, the power was out (surprise surprise) so everyone’s table was shrouded in darkness. We couldn’t see what anyone was selling!

Currency Manipulation
In the past 50 years the government has thrice declared without prior notice certain currency denominations to be worthless. In 1985 they even demonetised three quarters of the country’s currency (the 20, 50 and 100 notes) and created 25, 35, and 75 notes (because it was the dictator’s 75th birthday). Two years later they scrapped those silly denominations and replaced them with 15, 45, and 90 notes (because the dictator’s favourite number was 9).

And two years later the current General took the country in a coup, and brought in the current sensible denominations. In fact I’m sure many of those 1989 notes are still in circulation — most bills are so old, torn, taped up and filthy, that they’re barely readable. Some bills are so irrepairably shredded, they are kept in plastic sleeves.

Coins would be a sturdy solution, but we haven’t seen one yet. (People still transact with bills worth 2 cents). The banking system is disconnected from the world, so all ATM and credit cards are useless. Once in the country, the only way to obtain more money, is to leave the country.  We brought of all our (slightly under-budgeted) money in crisp US bills, which we knew we had to exchange for Kyat. Since the black market rate per dollar is about 900, and the official exchange rate about 6 (yes, six), we would opt for the dark side.  And since the largest bill is worth about $1, we’d be walking out of our blackmarket transaction like drug lords (with bricks of money).

And the transaction went like this: A really friendly Indian-Burmese man found us in the market, offering us a better rate than others, with a plausible backstory about why his boss can give a better rate than anyone else. (Tyre business in Thailand needs USD).  We met his ‘boss’, made jokes and talked at length. His boss even told us how happy he was we stayed at the YMCA, because they taught him his suburb english, and he’s endlessly grateful. In short, these guys gave us ‘good vibes’, and I’ve learned that in these parts of the world, that’s crucial.

The money arrived, and two new men replaced our ‘good vibe’ friends, to conduct the transaction. These new men were edgy, unfriendly, and had sinister and (unfortunately common) teeth, blood-red and rotting, from betel-nut addiction. These guys gave us ‘bad vibes’.  We counted out every single bill (nearly 400 of them; remember their largest bill is $1), inspecting and replacing the worst ones, over a tense twenty minutes. Satisfied, we extricated the USD from our money belts. When they saw the bills, the men let out a choreographed groan. Our serial numbers were not good!  Oh, just imagine our bad luck! But these kind men would do us a favour, and take the bills at 10% lower rate.

In marveled disgust at their dishonesty (and saddened that this idiotic trick must actually work on some tourists), we walked out, and found a ‘good vibe’ Sino-Burmese man to change our money. He warned us about one of the other scams he called ‘fast hands’, because the money changers count the bills in front of you yet somehow you end up missing up to a third of them. We met a couple Canadians who lost $80 to this.  The best part of the whole transaction was when we saw the original con-man on the street later, we mentioned casually that somebody else took our ‘bad serial numbers’ without question, for the same great rate he was offering. It was almost worth our wasted time just to wipe that grin off his face.

I’ve (finally) managed to get some internet access that’s lasted more than 5 minutes. The election next week has caused the government to lock down web access for hours at a time. With proxy workarounds to get past the government firewalls, I’ve been able to access Flickr. I hope you find my efforts worthwhile.