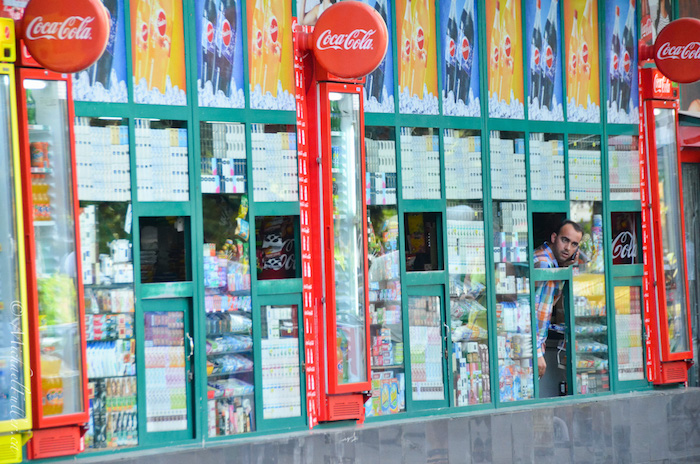 It was sometime about an hour after my escape from the bureaucratic clutches of the Uzbeks. That’s when I realised Tajikistan may not have been the panacea it seemed.

My shared taxi-driver, delivering me into the capital Dushanbe (affectionally known as ‘the big douche’) was ignoring lane markers and recklessly weaving us between cars. I glanced at the speedometer after passing a 70 km/h sign: we were doing 110. Pedestrians on the suburban sidewalks blurred into streaks in my peripheral vision, like the Millennium Falcon’s cockpit view while jumping to hyperspace.

The next day I walked across an intersection. A brand new Mercedes SUV stopped at a red light beside me, and an equally shiny BMW pulled up behind it. Then without warning, the Merc driver shifted into reverse and steadily backed up – right through the BMW. I can still remember the deafening crunch of the bumper grinding up that once-shiny hood.

During my five days in Dushanbe, I witnessed five traffic accidents – and plenty of close calls. It was because of this I thought back to the police ubiquity in Uzbekistan’s capital’s streets. And my hostel owner’s practical, autocracy-free explanation for it: “Because of all the city’s terrible drivers”.

Meanwhile in Tajikistan’s capital, people drove like teenagers who’d stolen their parent’s luxury cars. And it got me thinking that maybe the Tajiks could take a page out of the Uzbeks’ oppressive autocratic police state: It would do wonders for Dushanbian road safety.

We spent a lot of time in shared Landcruisers (and their butt-busting Korean knockoffs) criss-crossing the country’s often impassable mountain roads. We snaked our way to hiking locations and towns buried deep in this magnificently mountainous nation. Fact: Half the country lies above 3000 metres. Fact: Mountains cover 93% of Tajikistan (even Switzerland pales, at just 70%). Fact: Tajikistan contains the world’s largest glacier outside of the poles. It’s in the enormous Pamirs – a vast plateau of mountains known as “The Rooftop of the World”.

One such trip had us going north towards the infamous “Tunnel of Death”: an Iranian-built (but never completed) monument to civil engineering failure. Our first trip through this unlit and unventilated five-kilometre long tunnel of terror was exciting to say the least – and I’ve seen plenty of rock tunnels. It’s no wonder that passage through this tunnel sometimes requires signing waivers.

Why risk it? Here’s the alternative: A four hour, cross-border detour through Uzbekistan. This terror tunnel is the only road connecting Tajikistan’s two largest cities. (Before it was built, the Uzbeks had the cruel ability to shut down a critical traffic artery of their neighbouring country)

But it was the return trip that showed us how the tunnel truly got it’s reputation for “axle-snapping potholes” and “car-swallowing floods”. The truck in front of us drove into what looked like just another large puddle. Weren’t we all rather surprised when it turned out to be a hole so deep his rear wheels were now spinning off the ground.

As we drove around the poor-luck truck stuck hood-deep in a lake, I’ll never forget the image in my mind of steam rising off the submarined hood.

At that point our driver spoke up. “America is worried about Iran building nuclear weapons,” he said.

“They can’t even build a tunnel.”

A day of hiking later, we were here. I think the Death Tunnel was worth it. 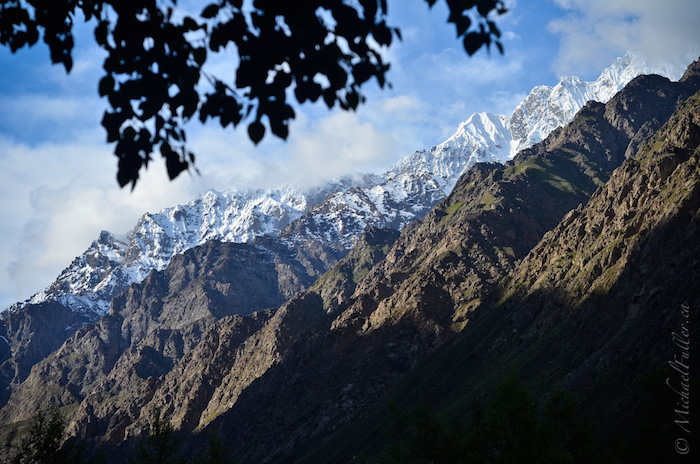 Did I mention there were mountains here? 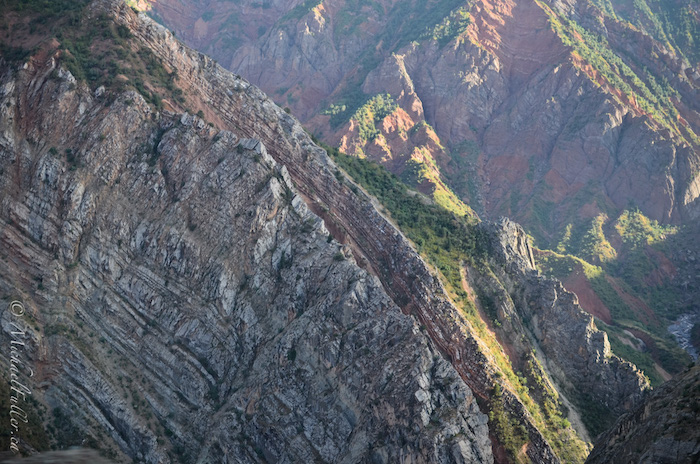 How to do Systemic Corruption, Systematically

These cross-country share taxi rides had a bizarre rhythm. Almost every hour, policemen set up at impromptu locations on the highways would indiscriminately flag vehicles off the road. Our driver would get out speak to them; seconds later we’d be driving again. I got very curious about what the heck was going on. Was our car unregistered? Oversized? Illegal?

Te real answer: much less mysterious. Systematic corruption! Instead of picking on some people and demanding huge extortion-like bribes, the police of Tajikistan have a sort of integrity to their corruption. They stop nearly everyone, and they demand tiny bribes. (The price was commonly 35¢ – which may not sound like much, but remember the average salary in Tajikistan is $8/day).

Tajiks don’t really love their neighbouring country of Uzbekistan, and I complained to our driver about the insanely high police density there. Police who intimidate the public with their omnipresence, and the occasional search – but rarely ask for bribes. Shortly after my mention of this, we were stopped for a fifth bribe payment. When our driver got back into the car, he let out a big sigh.

As he shook his head, he muttered in broken english, “Maybe… it is better in Uzbekistan.”

Tajikistan is remarkably busy with two-wheeled adventurers on round-the-world trips. The country is a sort of pinch-point, both practically and aesthetically, and nearly everyone riding motorbikes or pushbikes pass through Kyrgyzstan, Tajikistan, or both.

In our Dushanbe hostel, us ‘unwheeled’ folk were a minority. Our fantastic hostel (one of Central Asia’s finest) allowed those on much longer journeys to rest – like centuries of Silk Road travellers before them – and prepare for the epic leg of their journey which undoubtedly lay on either side. To the west lay the unforgiving deserts of Uzbekistan. To the east, the oxygen-sucking altitude of the Pamirs.

My favourite story from these travellers was Nico’s, an Austrian cyclist suffering an astounding run of bad luck. “A week ago, my wheel-rim broke. I could still ride, but then my gearbox cable snapped so I couldn’t change gears. The next day my rear pannier broke. Then my front pannier,” he continued.

“I tried to fix them with my Leatherman – but it broke. Later, my mirror snapped off. And the next day my digital camera stopped working. I was glad to arrive in Dushanbe to order spare parts.”

When he arrived he told myself that he’d had a crappy week, and was content to relax and forget about it all. On his first day in the city, his wallet was stolen.

“Then last night,” he continued in a tone of comedic frustration, “I went to a nightclub, and a prostitute broke my iPhone!”

We all sat around Nico, laughing at his story. Nico stared down at his iPhone, its shattered corpse laid on the table before him. Sometimes it would light up, and he’d speak to it – gently, lovingly, trying to coax it back to life. But it never responded to his touch.

Nico was someone who should have been as broken as his bicycle, but he remained hilariously upbeat.

We all assume that cycling six thousand kilometres from Austria to Tajikistan requires a strong body. But people like Nico, in his equanimity, teach us that such journeys don’t just shape one’s calf muscles. They also shape one’s outlook on life.

And that’s something that’ll last much longer than well-defined legs. 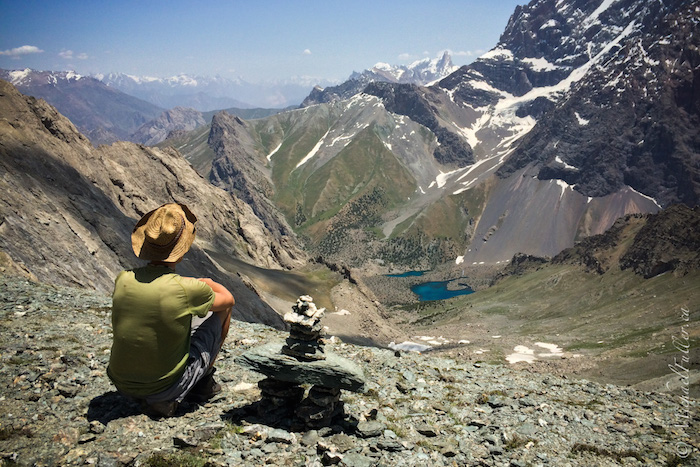