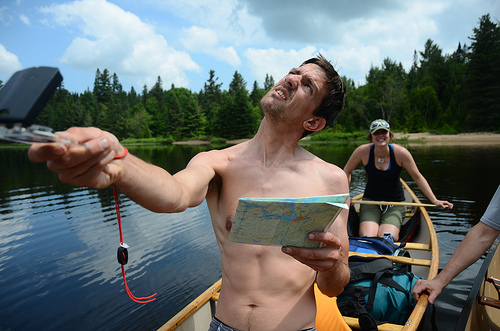 The trip wasn’t off to a great start, when I had already counted 3 forgotten items before I made it through exiting Australian customs. One of the forgotten items was a pen; unfortunate because my wait for a working pen was longer than for the customs officer to stamp me out of the country. I was feeling quite jovial (and smart-alecky) so I joked with the explosive-trace lady about whether I looked explosive. We proceeded to have an argument about the definition of ‘random passenger selection’. (Which is how she described the process of her picking whomever she felt like). I failed to convince her that human beings cannot make truly random decisions, since we cannot ‘switch off’ all our prejudices. Once she deemed me insufficiently explosive, she waved me onwards. One metre later, the body search frisker guy decided — wait, ‘randomly selected’ — me too.  I swear she gave him a signal. But at least this guy had a saving grace, for on his tie was a Canada pin. That made everything just fine. I pointed to the flag on my backpack, and we bonded. If only he had seen my flag earlier, I know I would have been waved on without a search. Canadians are too polite to hijack aircraft.

“Your flight time from Singapore to Frankfurt will be twelve hours and forty minutes.” Crikey! When did Eurasia get so big? On the upside, I had a whole row to stretch out. On the downside, a nearby passenger’s vile gaseous emissions frequently assaulted my olfactories. There were only two possible suspects: and my money was on the plump old Indian man with protruding ear and nose hair.  I did my best to send him the message that his silent crimes were not going unnoticed, by casting suspicious glances at him with each offense. The villain; he showed no remorse.

We landed in Frankfurt, what an airport! The place was busier than a one legged man in an ass-kicking contest. The bar patrons tipsily clogged the walkways near my gate as they swigged steins; while metres away, Turkish cleaners argued emphatically and didn’t clean anything. Everyone was fairly well dressed, besides a few eccentric old men with Einstein hair. And everyone kept speaking to me in German, even when I responded in English to their instructions. Perhaps I was doing too good a job at guessing what they were saying, or perhaps my German heritage confused them. Ach du lieber.

In just four days in the Danish capital I crammed in a month’s worth of fun. We danced in a Carnivale parade. We swam in the cleanest harbour in the world and got in trouble for violating laws against child porngraphy. We danced some more in a free outdoor BYO-alcohol music festival at twilight (which lasts all night at 55 degrees latitude). We visited the forty-year old squatter community of Christiania and all the various drug stalls, and could not get a straight answer about how they import the drugs into the country (“use your imagination” was the best). And we snuck into Europe’s longest salt-water aquarium after closing hours. One morning I lost my wallet; four hours later it was returned, by a well-known Danish actress nonetheless. Famous people in Denmark don’t usually lead isolated lives like our celebrities; this actress was Afton’s neighbour. And the next day in the art gallery ‘Louisiana’, we brushed shoulders with a famous Danish traveler and author. Don’t ask me his name because I couldn’t pronounce it then either.

While relaxing on the grounds outside Frederiksborg castle we were attempting meditation lessons, when a woman dumped a box of seven puppies on the grass beside us. That ended our session pretty fast. Who needs inner peace and presence of mind, when you can have puppies! During the drive through the countryside we passed the town of Taarbaek, famous because their head priest Thorkilk Grosbøll announced publically that he doesn’t believe in god! And the people supported him still as their religious leader. Back in Copenhagen, I learned that many of the churches are going out of business. They’re being used for art galleries and music festivals. Ahh, what a country.

Nina’s house, conveniently located in the red light district where the rent is cheap and the neighbours are.. interesting, sits across the street from the “Copenhagen Gay Centre” (a gay club), and beside it, the “Club 34” (a straight club). We played the game “Gay or Straight” by observing the people on the sidewalk and guessing which club they were headed to. A game to really test your gadar.

After planning my flights to allow a reasonable 8 day visit in Toronto, Dan pleasantly surprised me by unveiling he’d be flying to Toronto for four days. Three of those would be devoted to a canoe trip in Algonquin (my favourite park in Canada), somewhere I was shocked to realise I haven’t been in five years.  The night before we left, we still hadn’t discussed which car we’d be taking. Brent’s Volkswagen was questionable, because it is best characterised not by what’s broken, but by what’s working. But it’s all we had. And without roofracks for the canoes. At 5:30am on departure day Dan unveiled his roof rack blueprint, scribbled on a torn sheet of scrap paper. So we found some lumber, pulled out the powertools, made 2 cuts, drilled 6 holes, and 10 minutes later we had roof racks! The final touch was a $2 pool noodle from Canadian Tire, sliced and diced to protect our rented second canoe.

We didn’t lose a canoe on the highway, no doubt because Brent had one hand up, holding them. On the drive, Dan pondered if the buoyancy of two canoes could carry the weight of the Volkswagen. We almost got to test this when we arrived at the lake to put-in, got out of the car, and it promptly began rolling towards the water. Brent’s park brake is on the “what’s broken” list.

For the multi-media experience, check out the photos on my Flickr.