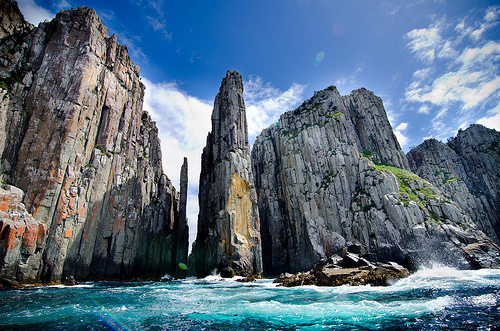 After only two hours on the South Island, I was off to a rocky start with hitch-hiking. But once the Germans saved me from the torrential rain, my second lift came easily. Dave picked me up when I was eating a sandwich and looking the other way, blindly thumbing the air. He was a consultant to the thriving local wine industry, helping them be more sustainable in various ways.

My third and final ride (for a while) was from an odd-ball kiwi couple whose station wagon interior resembled a homeless person’s shopping trolley. They could have had a decent garage sale with only their car’s contents. But they were friendly and talkative, until I asked what they did for a living.

After a few days off visiting kiwi friends and their families, I was on my way out of Nelson, and bumped into my Taiwanese friend Michi, part of my entourage for eight days in the north island. We decided to hitch down the west coast together. It was win-win: safer for her, and better for me, since people are suckers for couples. Especially when the girl is a tiny asian dwarfed by her backpack.

I joked that she was my secret weapon, and we spent the next four days touring the West Coast, covering 900 km via eight lifts, without ever waiting more than 2 hours. Since I love meeting random people and hearing their stories, plus I’m a cheap bastard, nothing beats hitching. Here are my lifts’ stories:

Rex the South African newspaper editor dropped us off, but an hour later appeared again! Comically, he had fueled up, gotten back on the highway, and half an hour later realised he was going the wrong direction and turned around. We revised our plan, so we went on with him for another hour.

Mark the machinist, a well-tattooed kiwi, put us in dog-hair laden backseats, and kept his dog in the front seat (where he couldn’t bite my face).

Becky the American, a bit lonely because her travel partner had left two weeks early due to family emergency, bought us McDonalds in exchange for lessons on how to use Skype.

Gordon emigrated from England to help expand his Christian yoga church (God appreciates limber worshippers), and gave us yoghurt and apples. His dry wit contrasted the flooded roads through which we tried to pass. The rain had closed roads all over the west coast, and he was on his third attempt after getting turned back twice to wait for water levels to drop.

Before I began hitching I wondered what kind of people would pick us up. Would they be tourists, immigrants, or locals?  We began a contest, New Zealand vs the World, keeping score in our heads of who picked us up. Including the three lifts I got before Michi joined me, the World was leading 4 to 3. Surely it would be sad for NZ if foreigners helped us out more than Kiwis.

Could New Zealand launch a comeback?

Our next lift was from a real kiwi ‘bro’, Tony, a tattooed trucker, and expert in Tae Kwon Do. We didn’t argue when he gave us strawberries. For those of you paying attenion, you’ll note that this was our third straight lift who gave us food!

Mark was a local environmental consultant, who also began as a mining engineer! He loved living on the west coast, and who can blame him. The Lonely Planet calls it one of the top 10 road-trips in the world, and it’s in my top 3.

Kathryn was a kiwi who spoke like a Brit, because her mother taught her as a child that the kiwi accent is “atrocious”. (They butcher their vowels, but I love it.) She was a mother of three in her sixties whose husband had recently left her. It wasn’t bad enough that he ran off with a forty-year old Zimbabwean woman, but he also left Kathryn half a million dollars in debt she barely repaid by selling their house and business, leaving her nothing. Of course, her husband was robbed blind by the Zimbabwean woman months later, putting himself into the upper echelon of fools.

Our final ride came from Dmitri, a Russian GPS programmer living in Auckland, and we spent two days with him, camping the night on a remote beach with alpine-glow views of the Fox glacier at sunset.
The final score in the New Zealand vs the World contest, thanks to a late comeback by NZ, was 6 to 5. We had come 900km in four days, seen everything we wanted and more, and met some amazing people.

I’ve still got a grab bag of little things to write about, so there’ll be one more update coming.  I’ve uploaded more Flickr photos, like some stunning coastal cliffs in Tasmania. And a cute child playing in the rain. How can you resist? Just follow the link behind the thumbnail above.

P.S. My title comes from the fact that Michi and I had signs for all our destinations, but also a second sign with smily faces and “PLEASE”. And we always smiled.

» Experiences, Oceania » A Sign, a Thumb and a Smile (New Zealand, Update #3)