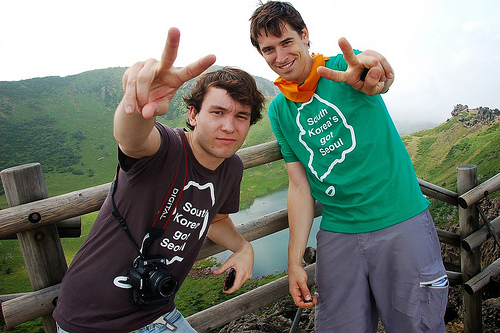 I write (the beginning of) this as I munch on the results of my final ₩18000: Dried sea weed—with a dash of sesame—purchased in the airport only 5 minutes before boarding to leave this country. And only 3 calories per sheet!
Diagonal Bisector

We left Seoul with incredible speed. Not because we feared the police after the inner tube float, but because we had tickets on the high speed train: Korean Train eXpress. This train is restricted down to only 305km/hour. As we bisected the country, to the second largest city located in the south-east corner of the country, the train blew past lush rice farming communities. What struck me was how dense the Koreans build even their farming towns! They had high-rises larger than anything in Perth; all to allow more precious land area for cultivating food, and at the same time reducing wasted money on all sorts of sprawl-related infrastructure.
Urban Planning

The train terminated in Busan, also utilising their land well. The city is smaller than Perth, with three times the population. But it’s where people live that’s also interesting. Like Hong Kong, the lush green mountains are left forested, for green space, hiking, and a few Buddhist temples*. Nobody gets to build a house “in the hills”, where they would live above other people, get a better view, and simultaneously ruin everyone else’s view of the mountains. Urban density, especially the egalitarian kind, makes me smile.
[*One striking temple, Seokbul-sa, is cut from an enormous rock face. The Lonely Planet describes it as “hard to find and difficult to reach”. An accurate description. We gave up.]One day after our arrival in Busan we were boarding the overnight ferry destined for “Korea’s Hawaii”: Jeju volcanic island. I had spent the entire 24 hours in Busan conscious. And half of that time was within arm’s reach of soju (Korean sweet vodka), or one of its many portmanteaus: Somaek (Soju with beer), Socol (Soju with cola), or so-J (Soju with orange juice).  For I had made a dozen new friends, some who barely spoke english, that I met in a club at 3am after Jon left. We traveled back to their hotel and stayed up to 9am bonding with help from the world’s two most powerful agents: Sport (world cup!) and alcohol (maekju, soju, makgeolli).  But it was time to get some sleep—scheduled carefully around watching Germany destroy Argentina.

Shields, Cones, and Tubes
Feeling great after the win, and adequate sleep, we decided to park our bags at a hotel and head immediately to South Korea’s highest mountain, the shield volcano Hallasan, to reach the summit. As a rule, Jon is not a fan of hiking, nor any form of practical exercise that does not promote the development of ‘beach muscles’. But after countless obscenities and 10km of ascent, he was even more excited than I to reach the volcano’s crater rim summit. The photo above is the victory shot. (Of course we wore our couples shirts). The walk down destroyed our calves, and we limped in hilarious agony around the island for the next 3 days. Actually, we did as little walking as possible, thanks to Mr Lee……

Mr Lee’s Bike Shop
In accordance with Korean law, Lee can only rent motorcycles and scooters to foreigners with international drivers licenses and at least one year of riding experience. I possessed neither. But we thought we could compensate with charisma and charm. After a ten minute discussion, he acquiesced to lending us a motorcyle and scooter. Feeling pretty proud of ourselves, we sat down to sign the waiver. He then plucked an extra waiver—for foreigners without proper licenses—from a rather handy stack beside the normal waivers. Perhaps we weren’t the trailblazers on this path of illegality.

We had more fun on the bikes than I thought possible. We criss-crossed the island to walk through cold, dripping underground lava tubes (the world’s largest), and summit a stunning tuff cone jutting 200m straight up from the beach in Seongsan (well, I did. Jon napped). We cruised the winding roads of the interior through foggy conifer forests and between lush green cinder cones. We navigated through the city, Korean-style: Lane-splitting, running red lights, riding down sidewalks. And since our motorbikes didn’t have front plates, we flashed smiles and peace-signs as we sped, well over the limit, right under the numerous speed cameras.

Warping Time
I’ve come to realize that one major attraction of traveling, especially when engaged in a steady routine of work, is its ability to slow time.

We have preciously short lives. And with the world changing so quickly—and ever faster—we’re losing many of the treasures it has to offer now. The world will be a much more homogenous place when we’re older. My mind was bursting after one single week in South Korea. The places I saw, the language I learned, cultural distinctions I experienced, the foods I ate, the people I met, and the adventures I shared. It has brought me memories to digest for a long time.

Thanks for being my tour guide, Jon!

P.S. The photos are uploaded. Twenty three photos; twenty-three mini stories. (For now).  Visit them by clicking the photograph above. And don’t be shy to leave a comment.

Addendum: What Lies Ahead

Despite having a quarter less GDP than Canada or Australia, I think SK is way ahead of both these countries technologically. I noted a few examples:

– Eight-megabit 3G internet on the subway (that’s almost certainly faster than your high speed internet at home)
– Geothermal, wind, and wave power generation
– Fifty-inch flatscreen touchscreen television for interactive learning in Jon’s elementary school classroom.
– Mobile reception everywhere; even on the open ocean ferry ride, or a 9 hour Hallasan mountain hike.
– One subway card you can refill, that worked in two different cities, 500km apart
– Elevators that allow you to unselect a floor
– Live television in taxis; for checking the latest traffic cameras (or more commonly, for watching soap operas while driving)