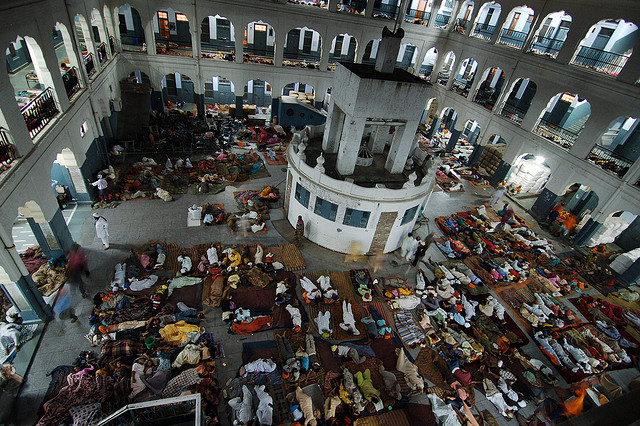 They were short on beds that night

Coming from Canada, Dan arrived about a week before I did. Normally very eloquent, his single email prior to my arrival had some profane exclamations about the place, without much detail. It piqued my interest and I couldn’t wait to get here.

Knowing how impossible his hotel would be to find, we arranged a place to meet just hours before my departure: An intersection in the Main Bazaar area at 3:30am. No problem, assuming my flight arrived on time.

I awoke in the middle of the night when my flight to Delhi touched down. Confused about the time zones, it seemed like we were a bit early, but my last flight had been 20 minutes early too. “Welcome to Kolkata”, the pilot said. Pardon me?

My seat-mate, a Buddhist Burmese surgeon from Kansas (fascinating guy), confirmed what was going on. Somebody on board had a heart attack: “A chubby Chinese man from Singapore”. The pilot came on the speaker soon after and in his thick Indian accent said, “Sorry we didn’t explain the situation with the heart attack passenger early, but we didn’t want to psyche him out”.

I’ve never heard a pilot say “psyche him out” before.

Knowing only Dan’s hotel’s name, I looked forward to the mission of finding it when I would eventually land, 3 hours late, in Delhi. It didn’t prove as fun or difficult as I hoped, because I just kept asking strangers until I found myself in front of the place. That’s the beauty of traveling here — so many people speak english! Though it’s a big plus, along with extensive rail networks, travel here poses many challenges. Filth and poverty, how easily you can fall ill, endless touts and beggars accosting you, and oppressive tropical heat and humidity.

On the lovely topic of filth, one of the funniest juxtapositions is seen when riding the 2nd class trains. Very clean, smartly dressed local men in pressed pants and shirts and polished leather shoes step into the train bathrooms, where they are greeted by an aromatic combination of excreta, sloshing on the floor. I just can’t get over this contrast.

Today a man in the market selling an air rifle I inquired about proceeded to cock it and level it at my face. I quickly pushed the barrel down and away from me and yelled at him. He just laughed and said “it’s just an air rifle, hahaha. It can’t hurt you!”

I told him I valued my eyes intact. Welcome to India, hey!

Many more stories to tell, but it’s late. There’s some nice photos and short stories on my Flickr. Just click the thumbnail image above.