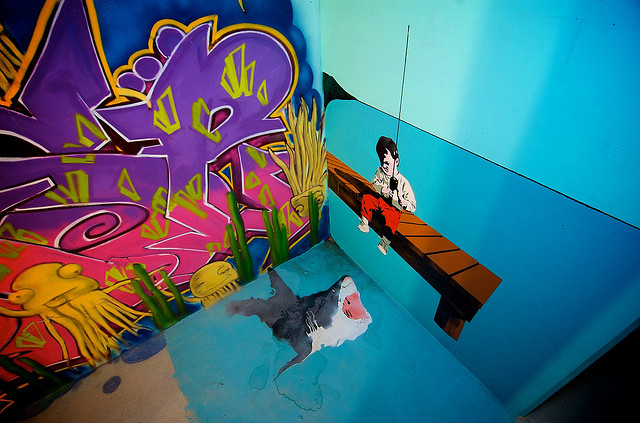 Banking on Coincidences
The credit card I hurried through in order to quickly buy my Macbook Pro sent my first statement last month. It had all my purchases on it, but a few oddities. Last time I checked my name wasn’t “Michael David Fuller”; and my card number wasn’t right.

Australian banks haven’t impressed me much. On top of my Citibank Visa not working with Apple (see “Bitter Winter Solstice”, 21 June), my Citibank online login requires me to type in my password by clicking a visual keyboard with my mouse. On top of that being a ridiculous way to enter any discrete type of information (no, I don’t mean discreet), it means I can’t bank if I’m ever in a public place with the possibility of wandering eyes or cameras present. And now another bank sends me a statement that could be somebody else’s, who just happened to purchase the same items, on the same days, that I did.
I called them up and was told the credit card number is changed by a few digits for security purposes: In case anybody opens my mail. As dumb as I think that is, the best part is yet to come.

I had to go in to a branch to sort out the “David” thing in person, and what the branch manager discovered was shocking (to her) and hilarious (to me). They had linked my credit card to some freak, with my exact birthdate, named Michael David Fuller, who recently closed his accounts in New South Wales (across the country). If I decided not to pay my $3000 bill it would be his responsibility to repay it, with his credit rating on the line. If only I knew beforehand; you’d all have flights to Perth, care of my doppelgänger.

Canadian Snow Boots
It’s very often that I must remind visitors to my place to take their shoes off. The unit is carpeted, and Perth is built on sand, so things get very gritty very quickly if people were to trod around the house in their shoes. I didn’t really think about this behaviour much. I just assumed I had a less polite social circle than I had in Canada. But I would now like to share with you a scientific fact: Australians (generally) do not remove their shoes in the house! I’m pretty sure Canadians generally do (but let me know if I’m wrong).

I had a discussion at work with a group who would not remove their shoes in their own or friend’s places unless specifically requested. They claim “if we had big snow-boots like in Canada—sure we’d take them off.”

But we canucks don’t remove our shoes just because they’re snowy! I don’t want all the grass, sand, gum, feces, smushed snails, discarded junkie’s needles—and whatever else you step on— smeared all over my carpet! This is a matter of practicality: How long does it take to remove a pair of shoes vs. vacuuming or steam cleaning carpets?

Hey!
All Australians pronounce ‘H’ as “heych” instead of “8ch”. They also say “hey?” instead of “eh?”. This must mean something….

Song and Dance
My time on the Project Team is wrapping up in a month, and though I’m excited to start something new (and go on a month’s holidays with my best friend), I’m really going to miss this team! They’re the best professional coworkers I’ve ever had. The consultants are highly-experienced overachieving management superstars from eclectic backgrounds with great idiosyncrasies, the company employees are enthusiastic and interesting, and everybody is fun, encouraging, and hilarious. One consultant Jason is a cool nerd who did some breakdancing when growing up in Sydney.

We often take ‘field trips’ to nearby historic sites. Last week we were visiting an old cemetery. While I carefully framed a photograph of a tombstone, I heard Michael Jackson’s “Thriller” begin to play behind me. I slowly turned around, to see Jason, performing moves from the famous music video. I laughed until my sides hurt.

This morning in our group office, Jason said to us “I’m sorry guys but I need to put on some of my music for a minute”, and began playing some Village People. When the “YMCA” chorus came, we couldn’t stop ourselves. While we danced away, two other team members were having a serious meeting in the end office with the door open—so only one of them could see us dancing. He burst into laughter, totally confusing his meeting partner who then rushed out to see three of us disco dancing between the desks. It was then brought up at the daily review meeting as a “success of the day”. I love these guys.

Contemporary Art
A month ago I attended an art gallery opening in Perth that—in terms of what I’ve seen here in nearly a year—stands unrivaled,. This art gallery opened for one and only one night. They had a fantastic local DJ spinning breaks and house music, and a makeshift bar, and over a thousand excited people attended to wander this labyrinthine gallery to appreciate the hundreds of pieces on display! What makes the event so unique is that this art gallery was in a five-storey carpark.

A local street art organiser, Ololo, was first asked to ‘brighten up’ the entrance to the parking garage. The owners loved it so much the whole project blew up into what is probably the largest single gallery of street art in the world. Over 18 months, 60 artists from across the country were brought in to paint hundreds of works. And they did fabulous work. You must really have a look at the set here, which only captures some of my favourite pieces, but provides more backstory. Like the dismembered head that joined us live from Denmark.

For my Flickr photostream with a very atypical collection of recent additions from long ago: Africa, Brisbane, Hockey (in Australia!) and Hong Kong, please have a gander here: http://www.flickr.com/photos/mrfuller/

A photo never seen may as well be a photo never taken. Without you, my photos are powerless!

P.S. I’ve got my flights sorted for Christmas, to Toronto with stopover in Vancouver. If you’ll be around please let me know.

One Response to Michael who? (Australia #12)