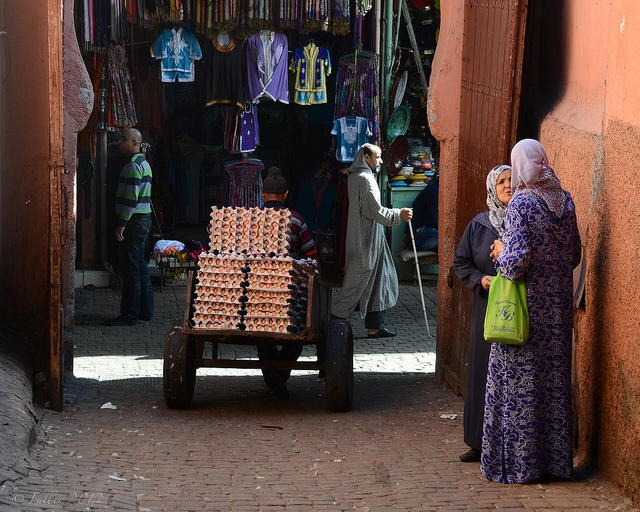 After 24 rather pleasant and mildly eventful hours of flying, I arrived in Casablanca and caught the first train to the city. The first of many pleasant locals I met was a massive, jolly man from Kuwait doing a PhD in Islamic studies, whom I literally squeezed into the seat beside. We spoke about many things, and when he inevitably began encouraging me to read the Koran, he delighted in the theological debate that ensued. My favourite counter-argument was explaining that I didn’t want to learn arabic, so I couldn’t truly read the Koran. He didn’t expect me to know that since the Koran is believed by muslims to be the literal verbatim word of god, in Arabic, it’s technically not possible to translate!

Upon arrival in Casablanca I left the station, had a thorough fifteen-second look around, and re-entered the station to catch a train to Marrakech. There weren’t any seats available, which (not a concern, since I had just been sitting for 24 hours), so I stood beside the open window (the train was stiflingly hot) with the air blasting in my face for the 3 hour trip. I spent most of those three hours sharing pistachios and great conversation with Karim (whom I called “Karim Abdul Jabbar” to remember his name; he called me “Michael Jackson” to remember mine). 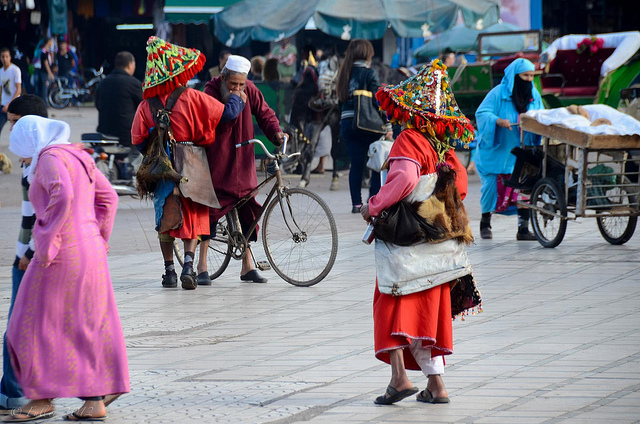 When I arrived in Marrakech, none of the taxi drivers knew where my riad (a traditional Moroccan home now commonly used for guesthouses) was, so I hiked off looking for it myself.  When I crossed the city walls into the medina (old city), I encountered a labyrinth of narrow, winding streets with high walls, no signage, poor lighting, hostile children, dead-ends, and maniacally driven motorbikes. I have patience, and a good sense of direction, but this was a whole other level!

After making sure I was, indeed, unable to find the riad myself — but knowing I was painfully close — I accepted the help of some local kids to find it. At this point I had been traveling for 30 hours with little sleep, on my feet for most of the past four hours, and walking with a fully loaded backpack for the past hour, dodging vehicles and fending off touts. It turned out that I was only a few hundred meters from my riad when the kids began “guiding” me — but it took them half an hour to find the place. They led me on an exhausting march through the streets, full of backtracking. Upon arrival, as I expected, they demanded a ludicrous sum for their ‘help’ (€20). I responded with hearty laughter. Then I generously offered them dh20 ($2), to share.

Of course this launched them into a fury: yelling, pleading, cursing, and bargaining. And after giving them an additional dh20 I got to use my newest Arabic word: “Go away”.  Thanks for teaching me that one, Karim! 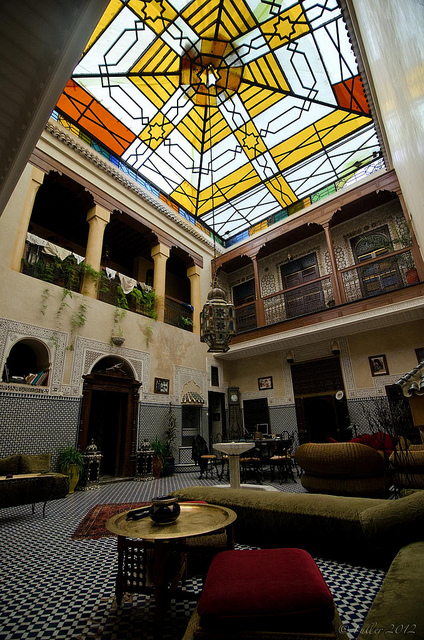 Some initial observations about Moroccans is that they are a bit rebellious. When our airplane landed, an old man jumped up and stood in the aisle. An the attendant ran to sit him down, the man looked at him blankly, before noticing everyone was staring at him, and grinning mischievously at his audience.  At Casablanca’s largest train station, I noticed a man casually strolling across the tracks to shortcut between platforms, instead of taking the underpass. His response to the security guard’s verbal abuse was an expression I can describe as, “Why would I take the underpass, when I can just take a few steps over these tracks instead?”. And motorbike drivers are far more likely to have their helmets strapped to their handlebars than to their heads. 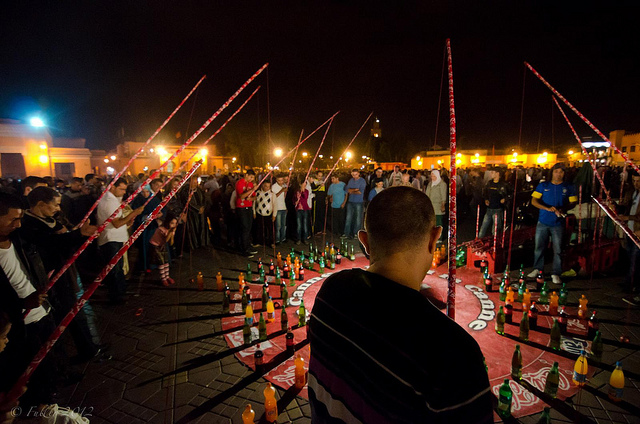 The motorbike driving madness became regular entertainment for me on my many daily walks to the Djemaa El-Fna (the main square in the town). In the narrow streets I saw teenagers racing each other, often riding with no hands. And dozens of pedestrians nearly bowled over. Once, after two shouting men nearly got into a punch-up (something else I witnessed daily), one man sped off on his motorbike in a blind fury, knocking an elderly woman to the ground.

But the real entertainment lay in the main square itself, as it has in Marrakech now for 1000 years. As mentioned above, this square is called Djemaa el-Fna which means “assembly of the dead” — and it was, back when the square was the site of public hangings. Now the square features other forms of entertainment: jugglers, palm readers, gamblers, snake charmers, fez tassel spinners, musicians, horse-drawn carriages, orange juice vendors, dried fruit sellers, pickpockets, astrologers, and hundreds of restaurant stalls. It’s got to be the most entertaining slab of central urban pavement on the planet. Beijing, I hope you’re listening, because I’ve got some great ideas for improving Tiananmen Square (possibly the world’s most boring central square). And the ideas aren’t about adding more CCTV cameras. 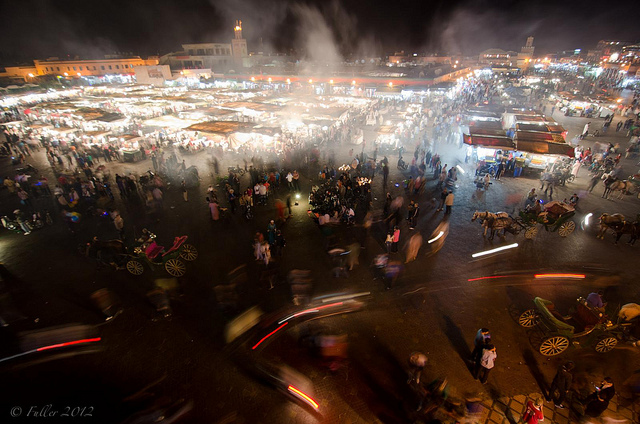 As usual I’ve got some photos to share! And many more on their way. Find them all here, inshallah.