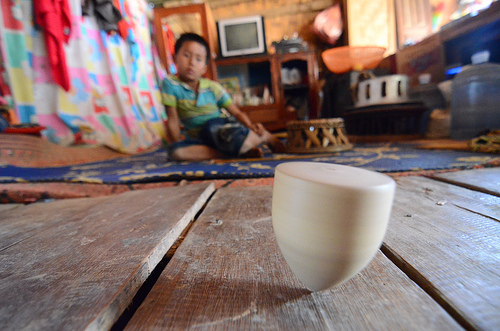 The Thais worship elephants (called ‘chaang’ in Thai; also the name of a delicious beer) as gods, and it’s not hard to see why: They’re amazing animals, intelligent and calm, many tamed as workers by their lifelong keeper, the mahout. But since Thailand’s ban on logging, many elephants and mahouts are out of work, and some have turned to illegal Burmese logging, or begging in cities for money.

Others have turned to tourism, running mahout training classes in the forests around Chiang Mai, teaching foreigners about elephant handling. I spent a few hours riding on the shoulders of my own elephant; my feet tucked behind her enormous leathery ears, my hands on the coarse bristles of hair on her head.

There’s something about riding an elephant that just makes you laugh, almost continuously. While washing her in the river at the end, the water behind her began to violently bubble. I soon realised I was witnessing one of the greatest farts in the animal kingdom. It was followed by three floating poops, the size of basketballs.

After an extended stay in Chiang Mai I was on the road, standing in a crammed local bus that stopped frequently to deliver parcels to roadside villages, and for anyone with an outstretched arm. After an hour of bending my neck awkwardly to avoid a haircut from the ceiling fan, I found a comfortable seat in the stairwell, knees and feet hanging out the open door. It was much more legroom than a seat afforded, so I happily took in the sights and smells of passing village life.

Our destination was a town we knew nothing about, except a rumour that a once daily boat runs (or ran) from it downriver, towards our eventual goal of Laos.

We exited the bus near the river and saw a full boat untying ropes for departure. We sprinted to it, and the Thai captain seemed to indicate it was the boat we wanted. I asked the English girl on board where the boat was headed, to double-check.  “You need to buy tickets up on the hill over there,” she replied quite unhelpfully.

Clearly, she hadn’t been in this country very long.

The driver urged us onboard, into the unshaded nose of the boat in front of the other 12 passengers. From the back of the boat came the unhelpful English girl again, twice yelling, “maximum 12 passengers!”.

We laughed heartily as the boat took off: At the situation, having barely caught the once daily boat out of town; and at the girl, who thought that tickets need to be purchased from booths and that vehicles have maximum capacities.

Not in Thailand, honey. 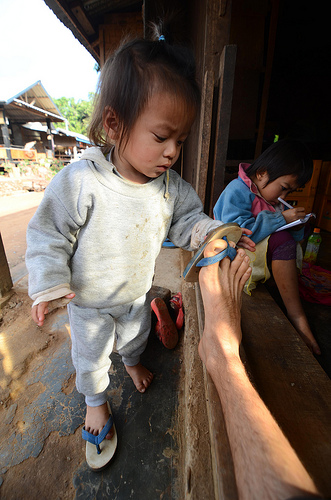 We decided to splash out and do the three day Gibbon Experience, which is up there with a safari for one of the more expensive things I’ve ever done in a developing country. The Gibbon Experience is an (almost too) successful project to protect the rainforest by turning poachers into forest protectors, and giving nearly 100 local villagers a sustainable income from tourists so they can preserve their ecosystem. (It is debatable whether you consider tourism as sustainable income, but Laos is a stable country).

So how do they attract tourists? By tapping into all westerners deep-seated desire to live in treehouses, and fly through the jungle. 1 We began our trip into the jungle after a short instructional video helpfully explained how to step into our zipline harnesses like we’re “stepping into a diaper”; and to make sure we tie up any “crazy hair”.

All the seven treehouses of the project were unique in location, view, design, size; but they were all entered and exited by zipline. We were fortunate to get the biggest, closest, newest* and best treehouse: a four-tiered treemansion in the canopy 40m high. It could comfortable sleep a dozen people, but ours was a rad and diverse group of nine people from six countries. This made the three days of hiking and epic ziplining — some over 40m high and 500m long — even more enjoyable. The “Treehouse nine”, as we named ourselves, got along so well we actually stayed together for a total of a eight days!

Though many jungle tourist attractions have ziplines and even treehouses, few have gibbons to look and listen for (their songs are incredibly beautiful). These apes eluded us for the first two days, and though none of us knew what a gibbon sounded like, we were woken at sunrise on our final day by a call like nothing we’d ever heard before.

We all knew immediately we were listening to gibbons. We sat in total silence for nearly an hour, focused on the haunting, eerie songs. They echoed through the morning mists rising through the jungle, the songs lifting and falling as one gibbon was joined by others for their crescendo chorus, before the decrescendo back to a single gibbon. The only thing I can compare it to are loon calls echoing over dead-calm Ontario lakes at sunset.

The second evening in our tree-mansion we heard noises on the roof and before long discovered we had two more occupants, of the rodent kind. The daring critters must have tightrope-walked the 50m zipline cable to reach the treehouse. After dinner, with light fading and none of the usual distractions from alcohol, electricity or technology, it wasn’t long before our attention turned to how we could catch and evict the free-loading rodents from our exclusive treehouse.

We tried chopstick bridges over water buckets, dangling rice baskets, and slingshot snares on precarious railings. The rats always managed to get the sticky rice bait, either through creativity, speed, or waiting until we were laughing too hard to notice them approach. Eventually the rats were full of sweet sticky rice and went to bed.

It then dawned on us, hilariously, that in over an hour we — an engineer, a computer scientist, and a brain surgeon — couldn’t outsmart a rat. 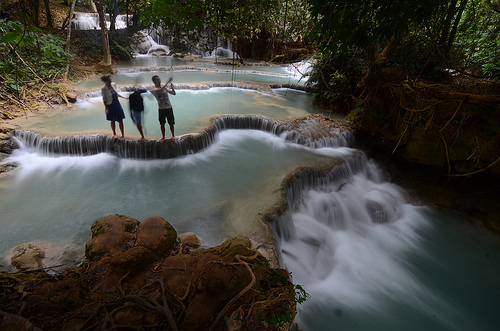 What is better than 25 photos? How about 25 photos per second! With sound.

Experience some of the jungle ziplining madness and take a short tour of our treemansion on my Youtube channel. And as always, there are new photos and micro-stories at my Flickr site

*we wondered how the closest treehouse can also be the newest. Our guide told us a harrowing tale about the original Treehouse #1 catching fire in the middle of the night, full of six sleeping tourists. One of them had left a candle burning (against the rules), which torched a mosquito net and quickly spread. The occupants were just able to save their harnesses from the flames, and zip, three at a time, into the darkness as the treehouse burnt down behind them. Bloody tourists!