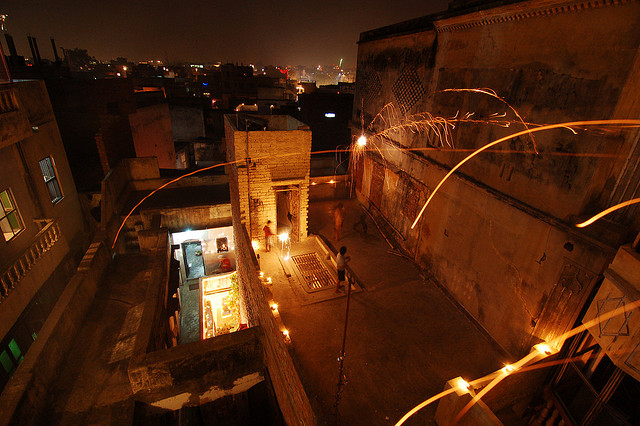 Early Bird gets the Worm

Most people go to Agra only to see the Taj Mahal, and maybe the Red Fort. They write off the town as a filthy hole full of touts and tacky souvenirs, but I had a fun day of random exploration in the old city bazaar I’d like to tell you about.

But first I should say that the Taj Mahal is the most exquisite building I’ve ever visited, especially when seen at dawn and when the crowds are small. I arrived early, got some beautifully ‘magic hour’ photographs, loitered around, and left before 9am. Later in the day I overheard a South African complaining about police pushing people out of the Taj. I had seen people getting ushered along if they loitered too long inside the tomb, a small dark room inside the Taj, and assumed he was talking about this.

No, no: An army of police officers with bamboo sticks herded thousands of tourists out of the entire building and surrounding gardens shortly after I left! Some people were actually struck when they turned to take some final photos on their way out. I couldn’t believe what he was saying. The officers also reminded the tourists as they kicked them out the gate that their $15 entry tickets were not valid for reentry. Please come again!

Apparently a “VIP” was coming for a visit (allegedly the President of Argentina, which I couldn’t confirm). They would re-open 6 hours later.

I later wandered into the bazaar, and left behind the ocean of tourists visiting the town’s actual tourist attractions. People were not used to seeing a happy Canadian wandering around smiling and saying ‘namaste’, and every 20 minutes somebody ushered me into their shop to have a chat:

First there was the Muslim leather dealer who told me you can get beef (illegal in this holy city) secretly if you knew the right people. He also told me that leather was farmed from cows after they stopped producing milk. I didn’t think you could kill cows in India!

Then there was the young pharmacist who said to me gravely “You look so comfortable, walking around here. Do you feel safe here?”.

I replied “Of course, why shouldn’t I feel safe? Are you dangerous? Is he dangerous?”, indicating his goofy friend; and as a smile began to creep across his face, I pointed to a frail old man nearby and asked “Is he dangerous?!”.  That set him laughing.

Later there was a naan man baking in his tandoor, who laughed when I tried to look inside and got a face full of wood-smoke. Next door was the blacksmith with crazy green eyes who showed me his international coin collection glued to the wall. He had two Canadian dimes; unfortunately I had nothing to contribute.

I befriended a bicycle rickshaw driver who happily explained his name was “One-Two” (spelt Vantu). I learned he gets 50 cents if he brings tourists to certain shops to look around, so I let him bring me to one. I took him out for lassi (a yogurt drink) and he told me about his life. He never want to school. As he put it, “Money… is a problem for my family.” He taught himself to read and write Hindi with help from friends who did attend school, but he’s unable to read or write in English. He began working at age 11 in a restaurant, where he’d earn $1/day. He saved enough for the rickshaw (about $200) and now by transporting tourists (only) he earns at least $5 per day. He happily bragged that some tourists pay him five times the price he’s willing to accept for the 3 km cycle I was on. He had some Australian coins he couldn’t change at the bank, which I offered to buy for the proper exchange rate. When I shelled out the hundreds of rupees for the coins, it reminded me how cheap India really is. Because I never think in dollars, only rupees, I’m often bargaining over 25 cents. It was a good reality-check.

Where a quick horn toot would suffice, Indians (and to a lesser extend, Nepalis) opt for prolonged, and often repeated, deafening blasts. Dan had a brilliant idea: Buy a hand-held airhorn, and blast back at the horn lovers.

When a single-file line at a train station would be fair and efficient, Indians opt for a mob, three to four people deep, jostling for position; a snake-fight of arms waving rupees at the small ticket window. I’ve began trying, one person at a time, to remind people how to line up. When someone jumps in the queue I tap them and, smiling, tell them we have a line (miming a straight line) and they should join the end of it (indicating with my thumb over my shoulder). Surprisingly, people nearly always comply, with a look of shameful incredulity on their faces. Others in the line are pleasantly surprised at my audacity, and usually inspired at least temporarily to continue the habit of forcing queue-jumpers to the end of the line.

When all our patience is sapped for touts, who can be a constant annoyance in the busier tourist cities (“You want hotel? Taxi? Trek? See my shop? Change money? Hashish? Jiggy-jiggy?”), we began to try and have some fun with them. Yesterday a bicycle rickshaw accosted me, offering a ride on his rickshaw. I responded by asking if he wanted a ride on my rickshaw. He did. So I jumped on his bicycle, and he sat in the back, while I rode myself to my hotel. I didn’t even charge him for it.

Today a tout just walked up to us and said “Yes?”. I replied “No?”. Then Dan added “Maybe?”. And the tout replied “OK!”. And we continued walking.

Complaining alone is too easy. It’s more fun to try doing something about it.

Take Care of Your Bags

The sixteen-hour night train journey from Agra to Varanasi was completely booked out and tremendously oversold. Even the emergency tickets were impossible to get, because the largest festival of the year  Diwali was the very next day and Indians were traveling home for it. A 20+ hour bus trip was out of the question, and I had to be in Varanasi, so I got some advice to just board the sleeper coach with my ‘general’ ticket (which they never sell out of) and bribe the conductor into giving me a bed. This is the Indian way of doing things.

As the train arrived I took a look at the ‘general’ class. People filled the seats and aisles, the cars so full many were actually hanging completely outside of the train. Clearly those cars were not an option, so I jumped into a sleeper car and onto a bed stacked with luggage. As long as the train began to move with me on it, I was home-free.

A young man asked me what bed was mine. “Uhm, this one I think?”
“Let me see your ticket. This is my bed” he said.
“Uh, the ticket’s buried in my pack. My bed must be down here.” and I moved on. Drat.

I scoured up and down the train car. It became obvious that my brilliant idea of boarding a full train was not unique. There was at least a quarter too many people in this car!  I walked past a bed with a bit of space beside 3 other Indians, one of them smiling at me. “Here’s my chance,” I thought.  I sat down, flashed smiles and tossed out ‘namastes’, started getting to know smile guy and the rest in this 8-bed section, and offered around my box of Indian sweets. The train began moving and I was in the clear, or so I thought.

Later on the conductor wandered down the train. I was nervous, but it became obvious that he wasn’t even bothering checking tickets. There were way too many people like me and sorting out the mess would be impossible. I knew that no beds were available so I watched him walk past.

I migrated from the edge of one person’s bed to another, moving when they began fidgeting to get their space back. Indians have a different sense of personal space than we do, and don’t mind crowding, but I wanted to be nice to people who presumably paid full fare. I slept in innumerable awkward positions stretched across bunks, curled up in corners, kinked-neck crammed into low-headroom spaces, and arched across my backpack laying on the floor. Late in the night a family decided to join our 8-bed compartment, now holding 13 people. This was insane.

Sometime after midnight I was kicked awake by railway police, carrying absurd rifles (we’re on a train!) and beaming a flashlight in my face. “Ticket, ticket” they demanded. I put on the best clueless-tourist-who-just-woke-up face you’ve ever seen, and searched for my ticket — for another class, remember — handing it to them non-nonchalantly. They began to chuckle.

(Aside: I get nervous when I hear police chuckle, owing to the Kashgar policeman in China who held us for 4 hours of questioning before demanding a bribe (see “Escape from Xinjiang (China Update #9)“) and nearly causing us to miss our expensive train.)

In a thick accent they asked me where my bags were. “Oh no. I’m going to be booted off a train in the middle of nowhere at midnight,” I feared. I slowly pulled out my backpack from under the seat. Suddenly they said in a pleasant tone, “Please take care of your bags,” and walked off.  That was close!

I spent the next few hours sleeping on the floor underneath the bottom bunk, with my torso protruding into the aisle, where people would step over my face to get past. I managed to get a few hours of sleep before my shoulders went numb and I had to sit up.

In the morning I talked at length with three of the Indians with whom I shared many laughs, especially when rehashing the insanity of the previous night. I recalled to them that a fat old man had kicked me gently a few times before letting out a huge fart, and then placing his feet firmly in my lap for 15 minutes.
The three Indians got along like old friends, laughing and telling stories, but had only just met on that train ride! It really blew me away how these sort of experiences are lacking in our day to day Western lives where we don’t even say hello to most of the hundreds of people we brush past each day.

We’re in Kathmandu now for a couple days, glad to have some reprieve from the insanity of India. Take a look at my photos and mini-stories from the trip so far by clicking the thumbnail above

P.S. Most people here spell my name with a slight twist.